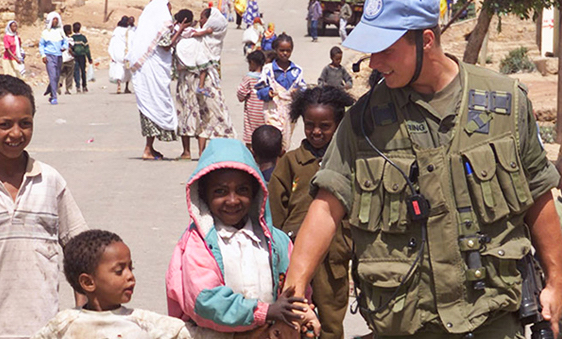 “In honour of National Peacekeepers’ Day, we join Canadians in paying tribute to our peacekeepers, past and present, for their service and commitment toward building a safer world. We recognize the professionalism, compassion, and operational excellence of those who have upheld our country’s values throughout the years by bringing peace and security to vulnerable communities in some of the world’s most volatile regions.

“We are proud of the more than 125,000 members of the Canadian Armed Forces (CAF), more than 4,000police officers from the Royal Canadian Mounted Police (RCMP), Indigenous, provincial, municipal, and regional police organizations, as well as thousands of Canadian diplomats and civilians who have supported peace and security operations around the world since 1948. Their meaningful contributions have had a direct and positive impact on the lives of people affected by conflict, and we owe them and their families our unwavering support and our most profound gratitude.

“We want to thank and recognize the work of current CAF members, police officers, diplomats and civilians, who are at the moment serving on a variety of peace and security operations around the world, in support of United Nations (UN) as well as in support to non-UN missions with a number of organizations and countries. We remain steadfast in our pledge to advance and support global peace and security in the face of evolving challenges. This is why the Government of Canada also continues to work diligently to take tangible steps to reform and modernize peace operations.

“Among these efforts, Canada is committed to supporting the UN with expertise, funding and specialized capabilities to increase UN missions’ efficiency and effectiveness. This includes, for example, the CAF’s provision of tactical airlift support to UN missions in the Democratic Republic of the Congo (DRC) and South Sudan since August 2019. This capability, which was recently extended until 31 March 2022, fills critical gaps in the air transport of cargo and personnel to UN missions. Additionally, over the past year, the RCMP has increased the police footprint in Africa by deploying Canadian police officers to the DRC, both as individual police officers and as part of a Specialized Police Team, which focuses on countering sexual and gender-based violence in vulnerable populations. Canadian police officers also continue to support the UN mission in Mali and will see in the fall a woman deployed as the Canadian Contingent Commander. This will be the second time a woman has served in this capacity.

“We also remain committed to increasing the meaningful participation of women in peacekeeping through the Elsie Initiative for Women in Peace Operations, in collaboration with our UN partners. We are now working with over 100 UN Member States to protect children in conflict settings where peacekeeping operations are present, through the implementation of the Vancouver Principles on Peacekeeping and the Prevention of the Recruitment and Use of Child Soldiers.

“August 9 was selected as National Peacekeepers’ Day in 2008, to recognize the greatest single-day loss of Canadian lives on a peacekeeping mission, which occurred on this day in 1974, when a Canadian military transport aircraft was shot down by Syrian missiles during a regular resupply mission in the Middle East, claiming the lives of nine Canadian peacekeepers. Today, we also pause to honour the memory of the approximately 130 Canadian peacekeepers who have made the ultimate sacrifice in the service of peace over the years. Their bravery continues to be reflected in the selfless work of peacekeepers around the world.”