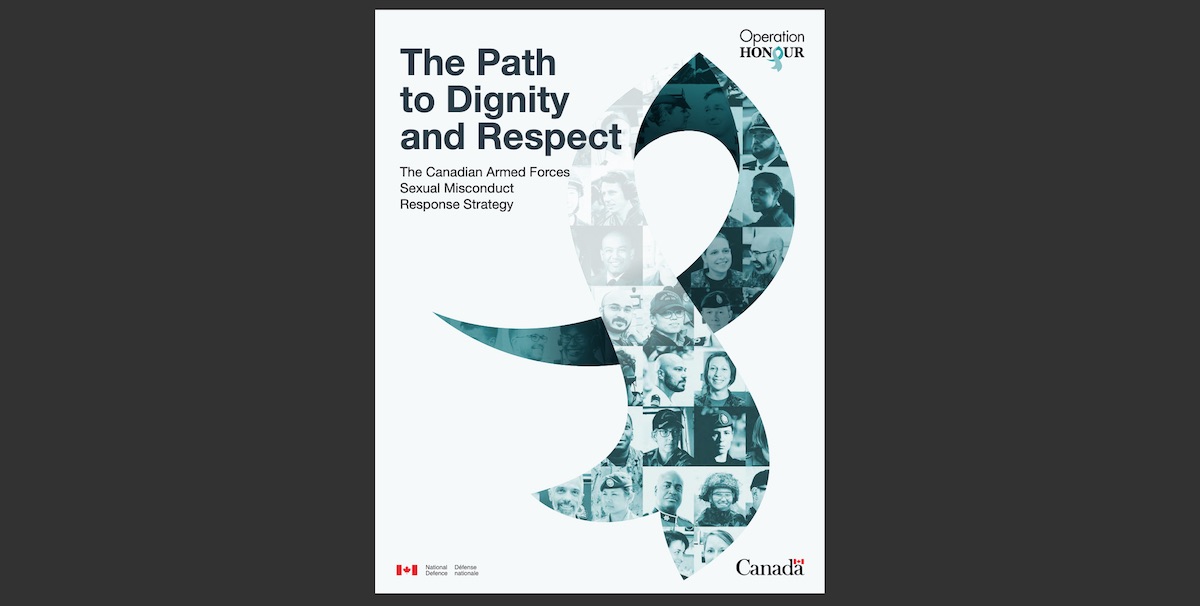 The Canadian Armed Forces (CAF) released today a comprehensive strategy to bring about an environment that is free from sexual misconduct and where everyone is treated with dignity and respect.

Released as The Path to Dignity and Respect: The CAF Sexual Misconduct Response Strategy, the document “focuses on aligning organizational culture to prevent and address sexual misconduct, and improve support for affected persons,” according to a release from National Defence.

This new strategy gives an in-depth analysis of the CAF culture, what must be eliminated, change or strengthen to address sexual misconduct, a prevention-based implementation plan, and a performance measurement framework to ensure continuous evaluation and improvement.

The Path to Dignity and Respect expands on Operation HONOUR, which was launched by the CAF in August 2015 to address sexual misconduct within its ranks. Operation HONOUR was initially shaped by recommendations from an external review conducted by former Supreme Court Justice Marie Deschamps, which underlined the need for a culture change strategy.

Based on research from a diverse group of national and international experts in culture change and change management, the strategy is designed to align behaviours and attitudes of CAF personnel with the principles and values of the profession of arms in Canada. Moving forward in refining Operation HONOUR, the focus will be on “ensuring personnel never minimize, ignore or excuse sexual misconduct, which is key to building a safer work environment and trust among personnel and the chain of command.”

“This strategy puts into one document, our principles, goals, and methods of how we will continue to work together to prevent sexual misconduct from occurring in our Canadian Armed Forces,” said LGen Mike Rouleau, Vice Chief of the Defence Staff. “The Path to Dignity and Respect gives expression to what we aspire to be, and what Canadians expect of us, and it will provide invaluable guidance to ensure the thousands of decisions our leaders make every day align with our values. It is a major step forward.”

The CAF welcomes all feedback, comments, and suggestions which could be incorporated into the strategy on an ongoing basis. If you would like to contribute to the strategy, you can submit your comments or ideas via the Operation HONOUR website.