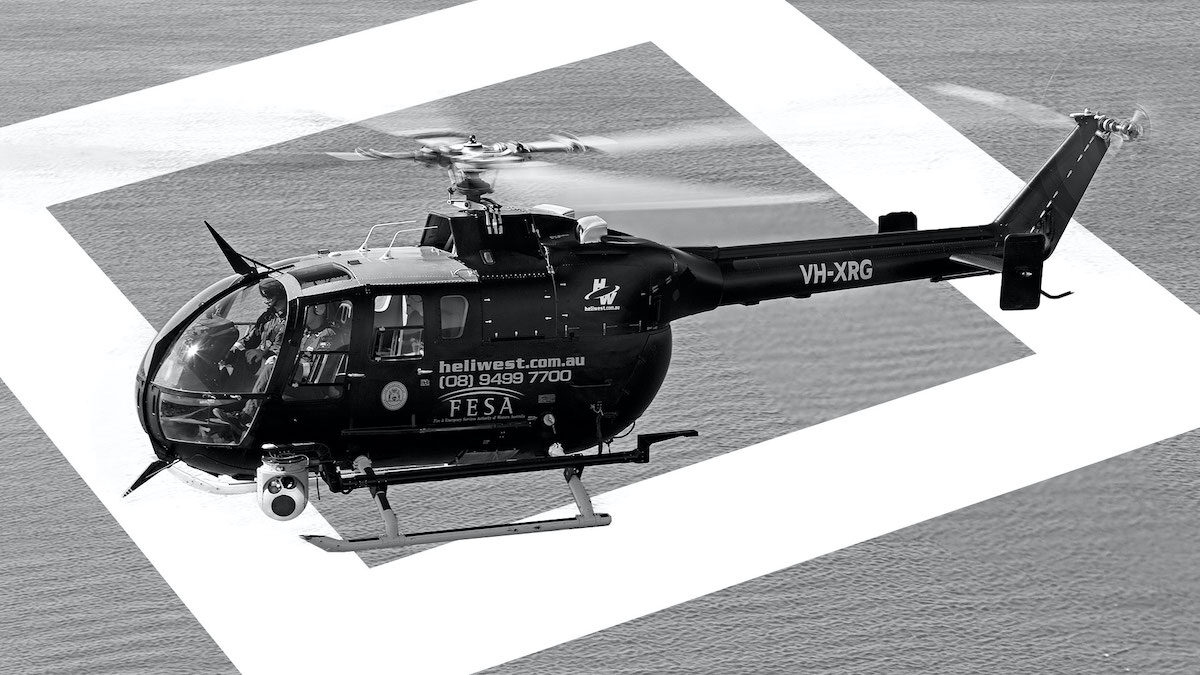 To win the contract, Heliwest had to generate accurate, up-to-the-second maps showing the active fire situation. They also had to be able to communicate those maps in real-time to teams on the ground.

“We had been involved with about four generations of AIMS at that point,” says Tim Hand, Manager of Special Projects at Heliwest. “So, we were very familiar with what the software could do and quite confident it would fulfill the mission. AIMS-ISR was really the only viable option.”

Heliwest won the contract and was fully operational in less than six months, ready to face the upcoming fire season.

AIMS-ISR fully integrates with and controls the EO/IR gimbal. This integration allows the operator to map the fire accurately by steering the camera’s boresight around the fire’s perimeter.

“We can take sensor photos and video, accurately overlay known reference points, and send those out in bursts over our data comms system,” says Hand.

“With AIMS-ISR, we can provide highly accurate, near-real-time maps of the current fire situation to planners and fire-fighting teams on the ground. Without it, that would be impossible.”

Heliwest has managed up to three concurrent incidents on a single mission, a feat that requires extreme coordination among all mission participants.

Based on Australia’s west coast, Heliwest is often involved in search and rescue missions over the vast ocean or the barren wilderness.

“If you’re conducting a search over water or desert, it’s hard to get accurate reference points relative to what you see,” says Hand. “On the other hand, when you’ve got all your sensors integrated with your GPS, as you do with AIMS-ISR, all you have to do is slew your cursors to what you see, click on it, and you’ve got it geo-referenced. You lay down your breadcrumb trail as you go along. Then you can go back later and put all those data points together.”

“You get an accurate overall picture of the situation: what you’ve covered, any evidence you’ve found, and where you need to extend or intensify your search,” says Hand.

Hand believes using AIMS-ISR on a variety of different missions helps operators gain a greater understanding and appreciation of the system’s capabilities and benefits.

“We use the same AIMS-ISR software, no matter what the platform or mission—SAR, ALE, fire monitoring, linear surveillance, oil spill monitoring, damage assessment and so forth,” says Hand. “It allows us to make huge efficiencies across our fleet and mission tasking.”

Hand credits Heliwest’s experience with both CarteNav and AIMS-ISR over nearly fifteen years as a catalyst for winning new business.

“AIMS is critical to all our sensor payload missions,” he says. “It’s the brains behind those missions. It helps us win many contracts we would not be able to compete for otherwise. It gave us the confidence we could go after those tenders and deliver on the specifications, knowing AIMS-ISR wasn’t going to cause us any trouble along the way. We know it’s going to be there, and it’s going to work.”

This article is a condensed version of a case study originally published on cartenav.com and can be downloaded here: cartenav.com/heliwest-vanguard