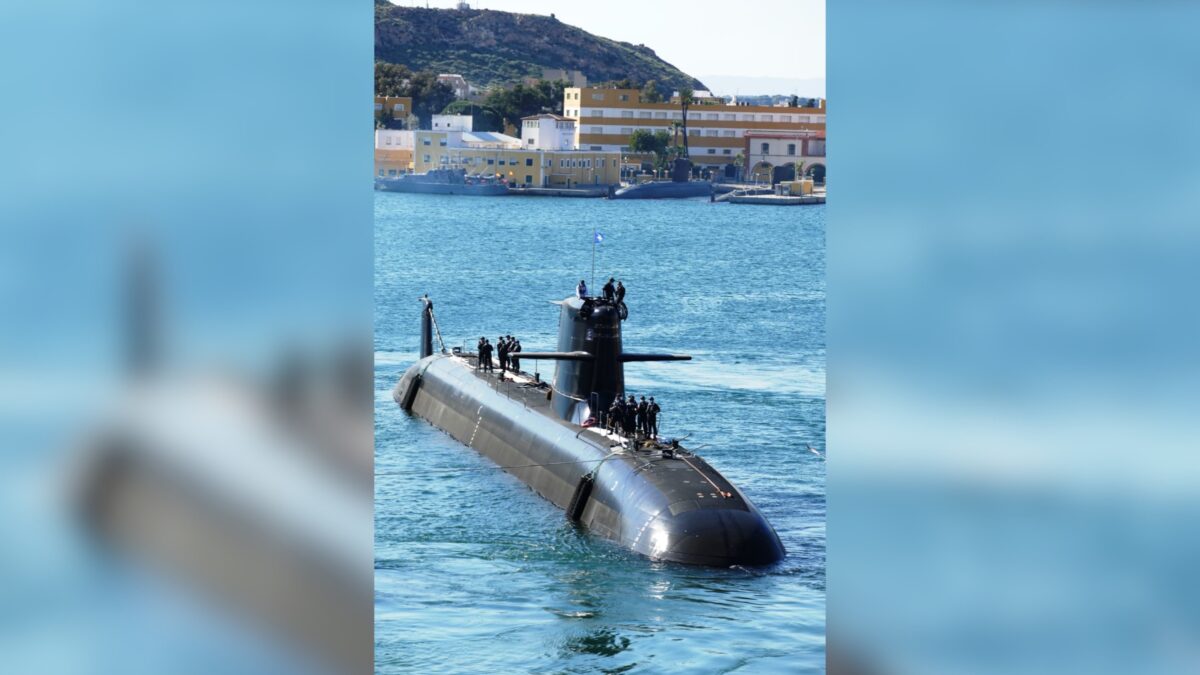 A state-of-the-art conventional ocean-going submarine designed and built entirely in Spain. One of its outstanding features is its third-generation air-independent propulsion system (AIP) known as BEST (Bio-Ethanol Stealth Technology).

It is a highly automated submarine that thanks to the state-of-the-art platform control system developed by Navantia Sistemas, allows it to be operated by a limited number of crew members (32 sailors and 8 berths for additionally embarked personnel), which can reach an underwater speed of more than 19 knots, and a maximum depth capacity of over 300 m. It is approximately 80 m long, 7 m in diameter, has a submerged displacement of 3,000 tonnes.

The S-81 Isaac Peral submarine, which is afloat since May ’21, is getting ready for its first submerged navigation. The submarine is going through the harbor and sea trials phase, where commissioning will take place in 2023.

The submarine S-81 carried out its first surface navigation in May 2022, thus fulfilling its demanding schedule of overcoming safety milestones. After the surface navigation tests, the submarine is undergoing a scheduled drydocking to prepare it for diving tests after one year afloat. After leaving the dry dock, the consequent scheduled tests will be carried out within the following safety milestones: static immersion, submerged navigation, and deep submerged navigation. These tests will demonstrate the high degree of interoperability between the systems and the performance of the submarine.

The S-80 is conceived as one of the most advanced conventional submarines. It is designed to respond to the strategic needs presented to Navantia by the Spanish Navy. This is how the shipyards began designing and building a vessel with a high degree of automation and diving endurance.

Navantia is working to bring to life a project that will count on unique technologies such as the AIP (Air-Independent propulsion) a system that will increase diving endurance. AIP is based on a bioethanol reformer which produces hydrogen to be fed to a fuel cell that generates energy to power the boat. This results in a substantial extension of its submerged range and thus in increased stealth AND reduces its level of detectability. In addition, the submarine can be operated with a reduced crew without reducing its capabilities:

The technology behind the development of the AIP is state-of-the-art and is the first submarine that can generate the required hydrogen on demand, increasing hydrogen availability while enhancing safety.

The S-80 integrates a combat system developed by Navantia in collaboration with Lockheed Martin that supplies the sonar suite, and a weapon system which provides the vessel with the capacity to launch tactical ground attack missiles from the torpedo tubes. The S-80 thus represents itself as a formidable tool with a credible deterrent effect.

The S-80 submarine Program planned for the Spanish Navy comprises four units, all of them already under construction. It is worth to highlight that S-84, the last unit of the series, is in the process of manufacturing the first frames for the hull, using a new and state-of-the-art robotic welding process. Subsequently, the first rings and sections that will make up the hull of the submarine are being produced more efficiently.

Navantia is a state-owned company, which designs and builds ships with a high technological content for the Spanish Navy and other navies. We integrate systems and provide life cycle support, repairs, modernization, and technology transfer (ToT) services in 20 countries. We are a highly export-oriented company open to develop different schemes of collaboration based on our customers´ interests.