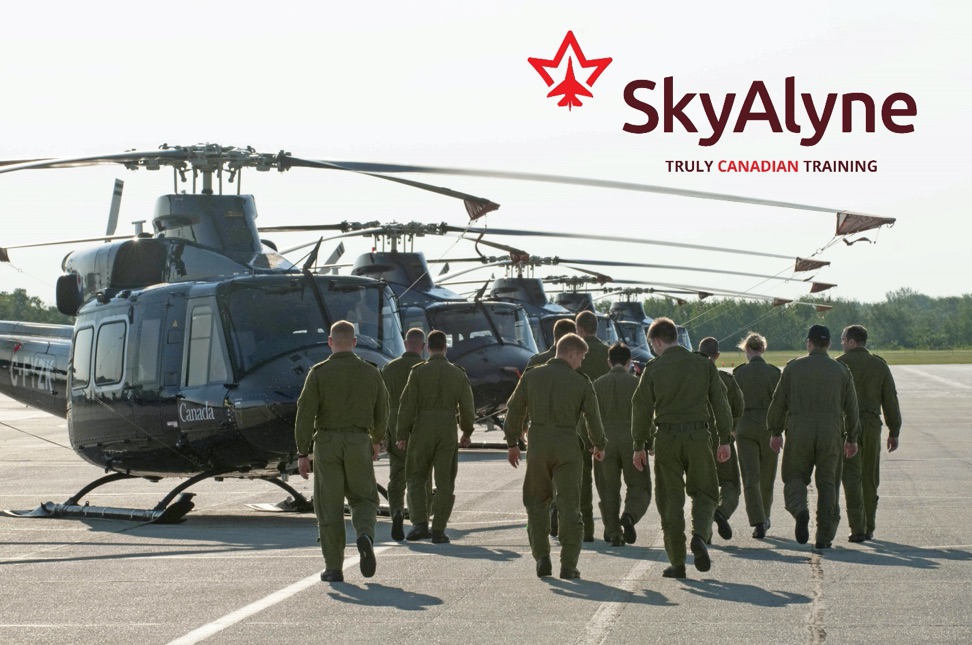 When the Government announced the Future Aircrew Training Program (FAcT), Canadian companies CAE and KF Aerospace were faced with a choice. To continue providing contracted training support for the Royal Canadian Air Force (RCAF) for the next 20+ years, they could compete against each other, along with several internationally based defence contractors. Or they could join forces, combine their considerable experience and expertise, and provide a comprehensive, truly Canadian solution for FAcT.  They chose the latter, calling the new partnership SkyAlyne.

Forming SkyAlyne was a sensible move. On their own, both parent companies currently provide all contracted pilot training support for the RCAF. KF Aerospace has led the Contracted Flying Training and Support (CFTS) program at Southport, MB, since 2005. CAE has managed the NATO Flying Training in Canada (NFTC) program at Moose Jaw, SK/Cold Lake, AB, since 2015. Today, a successful RCAF pilot-candidate will complete all phases of their contracted training between these two programs, from ab initio (beginner) to receiving their ‘wings’ and specialized training.

By creating SkyAlyne, CAE and KF Aerospace have brought the entire scope of contracted military pilot training in Canada under one umbrella.

Why is this important for FAcT? The knowledge and experience gained through managing the existing programs will be critical to delivering next-generation training. Large training programs require constant adaptation to deliver consistent, quality outcomes. By applying the same efficiencies needed to excel in the private sector to a complex military environment, the teams at Southport and Moose Jaw/Cold Lake have achieved consistently high-performance scores and aircraft availability rates, keeping student pilots in the air.

The proof is in the results. To date, the CFTS and NFTC programs have produced hundreds of thousands of in-flight training hours, leading to thousands of pilots successfully trained for Canada and allied militaries.

Peter Fedak is the current Site Manager for the CFTS program. A retired RCAF helicopter pilot, flight instructor and the former Commandant of 3 Canadian Forces Flying Training School (3CFFTS) at Southport, Fedak has been both a user and a key player to the continual improvements KF Aerospace has made.

“While I was impressed each time I was here, my main experience was how much it had evolved with each iteration of the program,” says Fedak. “The efficiencies of contracted support were highly evident compared to the operations as a military base. The overall willingness of KF Aerospace to provide the necessary services to the Department of National Defence, as well as the speed of decision-making, truly makes the system work efficiently and effectively.”

The experience factor SkyAlyne brings is not just essential to the long-term effectiveness of the FAcT program, but also offers the best solution to mitigating any short-term risks.

FAcT will combine three separate aircrew training programs. As the NFTC and CFTS programs phase out and FAcT phases in, more than training throughput will need to be synchronized. Program staff, resources, and hundreds of contracts must be transferred – without incurring cost overruns or disrupting the training flow.

At a time when the military is already facing pilot shortages due to demand for this critical skill, handing over the contracted training program to a completely new supplier could lead to costly and lengthy service interruptions. This scenario would compound the pilot shortage problem and cause added duress on the RCAF. This is an unnecessary risk when a Canadian solution already exists and the team behind it has proven effective at managing the current contracted training programs.

Furthermore, SkyAlyne is the only qualified supplier for FAcT able to seek improvements in advance of implementation (while still managing the current contracts). With experienced personnel and longstanding working relationships already in place, SkyAlyne can focus on the immediate enhancements needed to meet and exceed the requirements of FAcT.

Scott Greenough is a former RCAF fighter pilot and the previous Commandant of 2 Canadian Forces Flying Training School at 15 Wing Moose Jaw. Greenough has been the director of the NFTC program since 2015 when CAE assumed ownership of the contract.

“Transition periods are inherently risky,” says Greenough. “It takes considerable time and effort to staff up, to get new equipment in place, facilities in order and get everyone on board with the new policies and procedures. There is a learning curve and during that time, service levels can drop for extended periods. SkyAlyne not only minimizes that risk, but we can focus on immediate enhancements to meet and exceed the requirements of FAcT. This will provide stability for the government, military, and local communities that depend on these contracted programs for quality jobs and local support.”

A full range of capabilities

SkyAlyne’s advantage extends further than the direct experience managing the current contracted programs for the RCAF. By combining two industry-leaders with a full set of capabilities, SkyAlyne is ready to apply advanced expertise to all areas of the FAcT program.

It is a unique opportunity and advantage that the world’s largest aviation training company happens to call Canada home and has done so since its founding in 1947. CAE is a worldwide leader in pilot training and annually trains more than 220,000 civilian and military pilots and aircrew across the globe. To succeed in a competitive landscape, CAE has remained innovative, leading the development of cutting-edge advancements in simulation-based training and in-service support.

For proof, look no further than the recently launched CAE TRAX Academy. The CAE TRAX Academy is an integrated training program that utilizes advanced virtual/augmented reality (VR/AR) and combines it with big data analytics and artificial intelligence. VR/AR training is already being trialled by the US Air Force. The technology is also likely to be looked at by Canada and other air forces as a cost-effective and accessible way to enhance self-paced training and streamline the overall pilot training timeline, thereby reducing the factors that lead to pilot shortages. Having these capabilities available in-house will be another important benefit SkyAlyne brings to its FAcT offering.

KF Aerospace also has a long history of supporting and working with Canada’s military. The Department of National Defence granted the company full recognition as a Design Approval Organization (DAO) in 2013. In addition to the 40-training aircraft KF Aerospace maintains and manages at CFTS Southport, KF also holds a Fixed-Wing Search and Rescue (FWSAR) maintenance contract with the RCAF.

SkyAlyne is the only truly Canadian solution for the FAcT program – made of Canadian founded and rooted companies and utilizing 100% Canadian content in its supply chain and partnerships.

Recent events serve as a stark reminder that some capabilities should not be outsourced. A uniquely Canadian training solution will ensure that external events or governments cannot disrupt the preparation of Canada’s military pilots and aircrew.

SkyAlyne also carries the potential of bringing our uniquely Canadian expertise to military partners around the world, returning the export benefits to Canada and enhancing our global reputation.

“A lot of people are saying, ‘We need to build more domestic industry capabilities in Canada’, especially right now,” says Fedak. “With SkyAlyne we have the chance to do just that while maintaining stability for Canadian workers and securing an important military capability for a generation. In today’s uncertain world, SkyAlyne just makes sense for Canada.”

Team concludes recovery operations of Stalker 22 in the Mediterranean Sea

Simplify the complex : How you can accelerate your S/4HANA migration using process mining