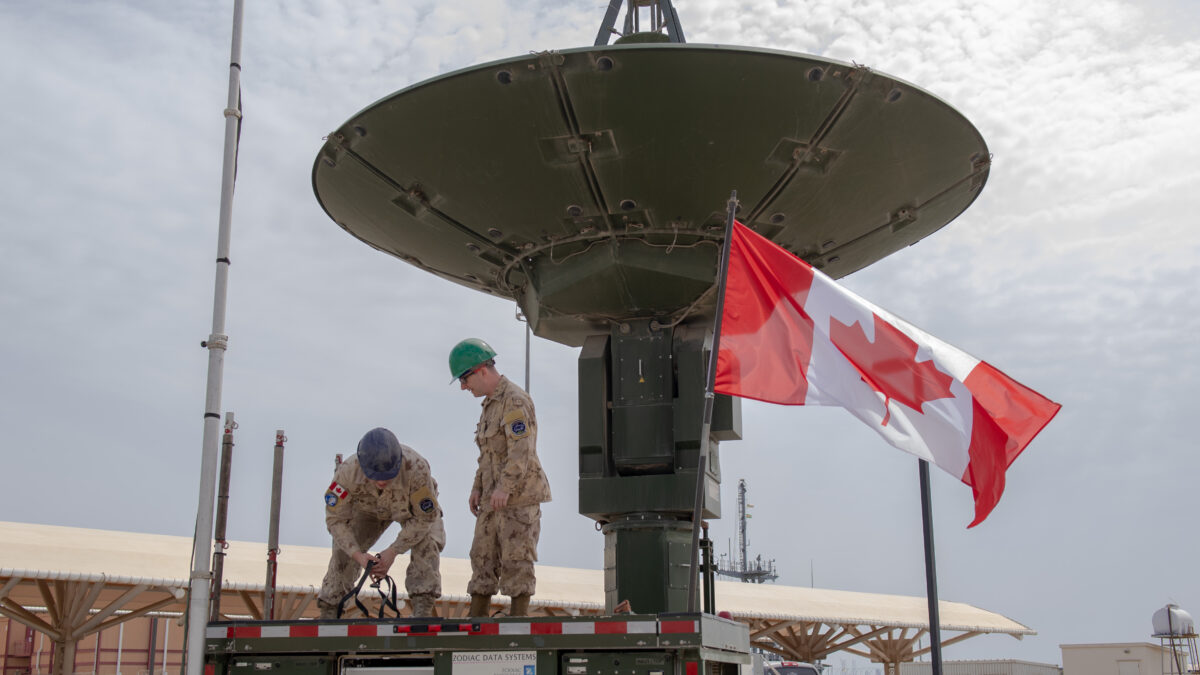 Connected battlespace continues to become a reality for nations across the globe.  New concepts of operations like this require the integration of emerging technologies to ensure effective defence capabilities. Integration of these emerging technologies for a national defence strategy is a significant challenge best addressed through collaboration between industry, government, and academia. Collins Aerospace is committed to supporting the Department of National Defence (DND) Mobilizing Insights in Defence and Security (MINDS) program (SPNET led by Concordia University) and teamed up with Carleton University’s Norman Paterson School of International Affairs (NPSIA) to conduct a 2-1/2 year research project, funded by Mitacs, to help inform and guide this process.

The research project’s goal was to provide insight and recommendations to the DND on the “Impact of Emerging Technologies on Defence Policy”. The project explored four key technology and capability drivers currently in development: the connected battlespace, interoperability and connectivity, space-based technology, and synthetic environments. Through its analysis, the project aimed to provide DND policy makers with a better understanding of these critical areas and the global trends driving their advancement.

More than 130 experts from the DND, Defence Research and Development Canada (DRDC), Canadian Armed Forces, NORAD, U.S. Space Force, academia, and industry participated in four virtual roundtables to discuss the findings stemming from more than 40 in-depth interviews with experts in these technological fields. From these discussions, we understand that rapid technology development creates significant organizational challenges, and that there is more of a consensus about Canada’s current strategic positioning on the connected battlespace amongst stakeholders than expected. These activities led to the delivery of several comprehensive reports, white papers, policy briefs and scientific publications. The findings were then shared amongst the participants and key policy decision makers throughout DND.

The project also intended to provide a status report to DND on Canada’s challenges and opportunities with respect to the impacts of emerging technologies on a pan-domain force employment concept. The findings revealed a widening gap between Canada’s level of understanding on the decisive factors of future capabilities and the ability to fill that gap when compared to its closest allies, including the U.K., Australia, and the United States. This growing capability gap is potentially contributing to the decline of Canada’s defence credibility on the world stage and its ability to ensure sovereignty over the longer term.

Two other take-aways for Canada came out of this effort. The first underscores that emerging technologies are not only a game-changer in enhancing capabilities, but they also have an undeniable influence over Canada’s role with key allies. This is demonstrated by Canada’s place within the Five Eyes partnership and the creation of the trilateral security partnership between Australia, the U.K., and the U.S, known as AUKUS, which does not include Canada.

The second is that while Canada has both technology expertise and the opportunities to advance force development through key Major Crown projects, the policy and the program mechanisms are not adequate. NORAD modernization is a key example – there is not the same level of engagement or collaboration with industry compared to our U.S. ally, which is developing connected battlespace solutions under the umbrella of Joint All-Domain Command and Control (JADC2) and enabling the Defence Innovation Unit.

Additionally, the research strengthened collaboration with other organizations such as the Canadian Defence Association Institute (CDAI), the Canadian Global Affairs Institute (CGAI) and the North American and Arctic Defence Security Network (NAADSN), which is critical to advancing policy.