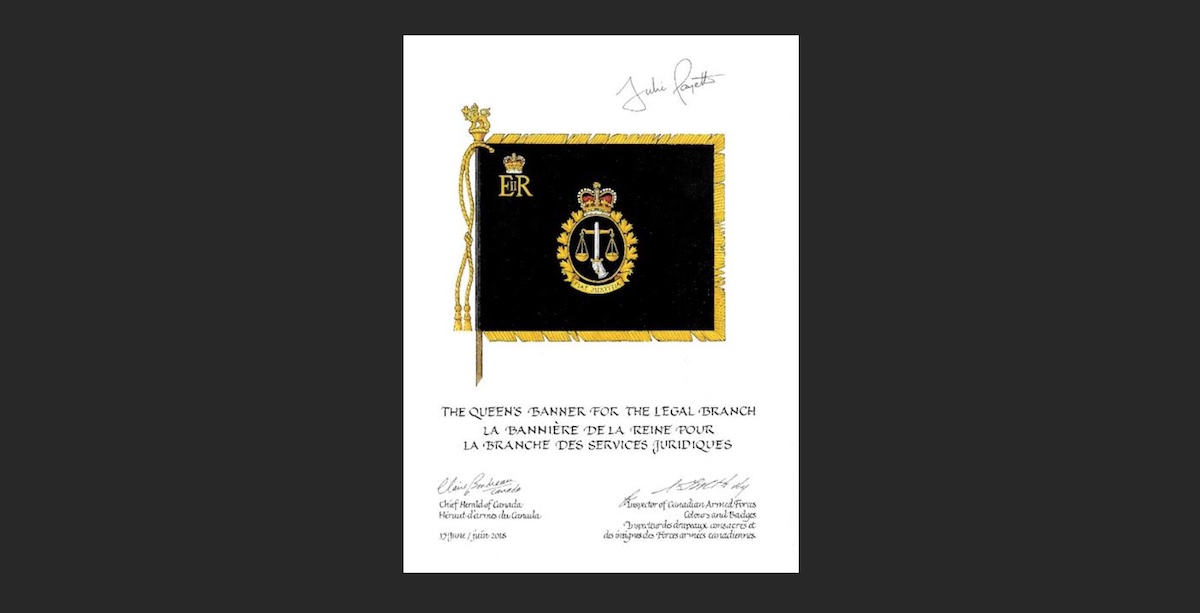 Queen Elizabeth II has graciously consented to serve as the Colonel-in-Chief of the CAF Legal Branch since 2013, on the day following the 60th anniversary of Her Majesty’s coronation as Queen in Westminster Abbey. The appointment is a highly symbolic reflection of The Queen’s coronation oath that included an oath “to cause Law and Justice, in Mercy, to be executed in all judgements” throughout her reign. The acceptance of the appointment by Her Majesty is a mark of tremendous honour for the CAF and a reaffirmation of loyalty and duty to The Queen on the part of the CAF.

The position of Colonel-in-Chief is a Royal Appointment – an honorary title normally reserved for the Sovereign and Members of the Canadian Royal Family. Although its origins can be traced back to the British Army, the appointment of Royal Colonels-in-Chief has been an integral and proud aspect of the life of numerous Canadian regiments, branches, and units for over a century. The Colonel-in-Chief is the guardian of history and traditions and serves to promote ethos, identity, and pride in service.

“The Canadian Armed Forces take great pride in the achievements of its Legal Branch during its first 100 years of commitment to Justice in service of Canada,” said Lieutenant-General Wayne Eyre, Acting Chief of the Defence Staff. “It is an honour to receive a Royal Banner from Her Majesty commemorating this important milestone; reflecting the service of many legal officers and their families, past and present.”

According to the news release, Royal Banners are special flags presented to commemorate specific services, are presented as special marks of Royal favour, and designs vary by circumstances. This live virtual event was hosted by Her Majesty from Windsor Castle with RAdm Bernatchez attending in Ottawa. The Queen also took the opportunity to virtually meet with a small and diverse group of members of the CAF Legal Branch.

“On behalf of the Government of Canada, I extend my sincere appreciation to Her Majesty, The Queen for this special recognition of more than a century of service to Canada, and the Crown, bestowed upon a very deserving Canadian Armed Forces Legal Branch,” said Harjit S. Sajjan, Minister of National Defence.

This was the first event during which Her Majesty has granted an audience with the CAF since the beginning of the pandemic.