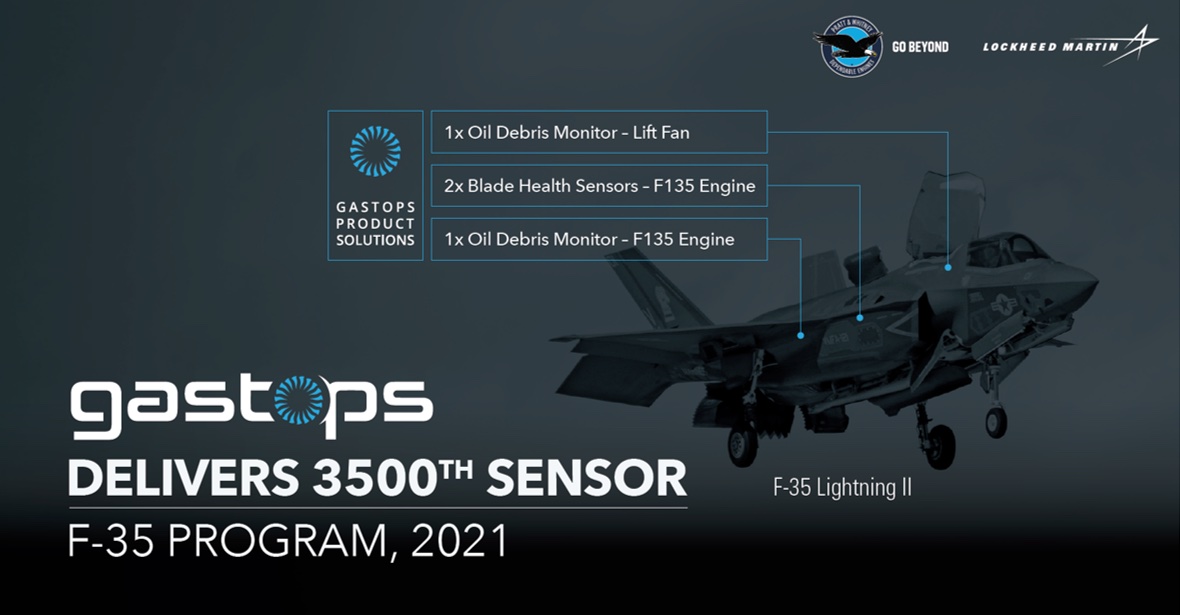 The Lockheed Martin 5th Generation F-35 Lightning II is the most advanced fighter jet in the world. One of the many aspects that sets the F-35 above the rest is its Pratt & Whitney F135 engine, which utilizes cutting-edge technologies – many of which are designed and manufactured by Canadian companies – to provide a step change in performance, safety, and reliability over 4th generation fighter engines.

Gastops, a company located in Ottawa, Canada that specializes in equipment intelligence technology, provides up to 4 engine sensors on the F-35A, B and C variants and is proud to announce that it has recently delivered its 3,500th engine sensor to the F-35 program.

The F-35 program relies on a highly accelerated supply chain of which Gastops is a key contributor. Aerospace supply chains have been greatly impacted by the COVID-19 pandemic and despite these impacts, the demand for the F-35 program has remained steady. Even under these difficult circumstances, Gastops’ production facility has continued to meet all scheduled deliveries.

At the forefront of these sensing technologies is Gastops’ MetalSCAN Oil Debris Monitoring sensors. MetalSCAN sensing technology offers a real-time condition indication of the health of critical components in the engine by enabling condition-based maintenance decisions rather than the outdated time-based methods.

MetalSCAN is fully integrated into the lubrication system of the F-35’s F135 engine on all three variants, as well as the LiftFan drive gear box on the F-35B variant. MetalSCAN provides advanced analytics through early detection, severity, and remaining life indication to predict the health of flight critical bearings and gears.

Pratt & Whitney’s F135 – which powers all three variants of the F-35 Lightning II – is the world’s most advanced fighter engine, providing operators with a significant technological advantage. With its advanced damage tolerant design and fully integrated prognostic health monitoring, made possible in part by Gastops’ sensors, the F135 has demonstrated a 93% reduction in unscheduled engine removals over 4th generation fighter engines.

Gastops has been a part of nearly every major Pratt & Whitney engine program since its debut on the F119 engine, powering the F-22 Raptor, in the early 1990’s. MetalSCAN is also used to monitor critical components for the Pratt & Whitney GTF commercial engine family. Gastops looks forward to its continued partnership with Pratt & Whitney and the shared vision to provide solutions that improve safety and reliability.

Gastops is the world’s leading provider of intelligent condition monitoring solutions used in Aerospace, Defence, Energy, and Industrial applications to optimize the availability, performance, and safety of critical assets. We offer peace of mind to our customers with innovative in-line monitoring sensors, at-line analysis, complex modeling and simulation, world class laboratory testing, engineering, design, and MRO services that predict performance to enable proactive operating decisions. Gastops has been providing powerful insights into the condition of critical equipment since 1979.