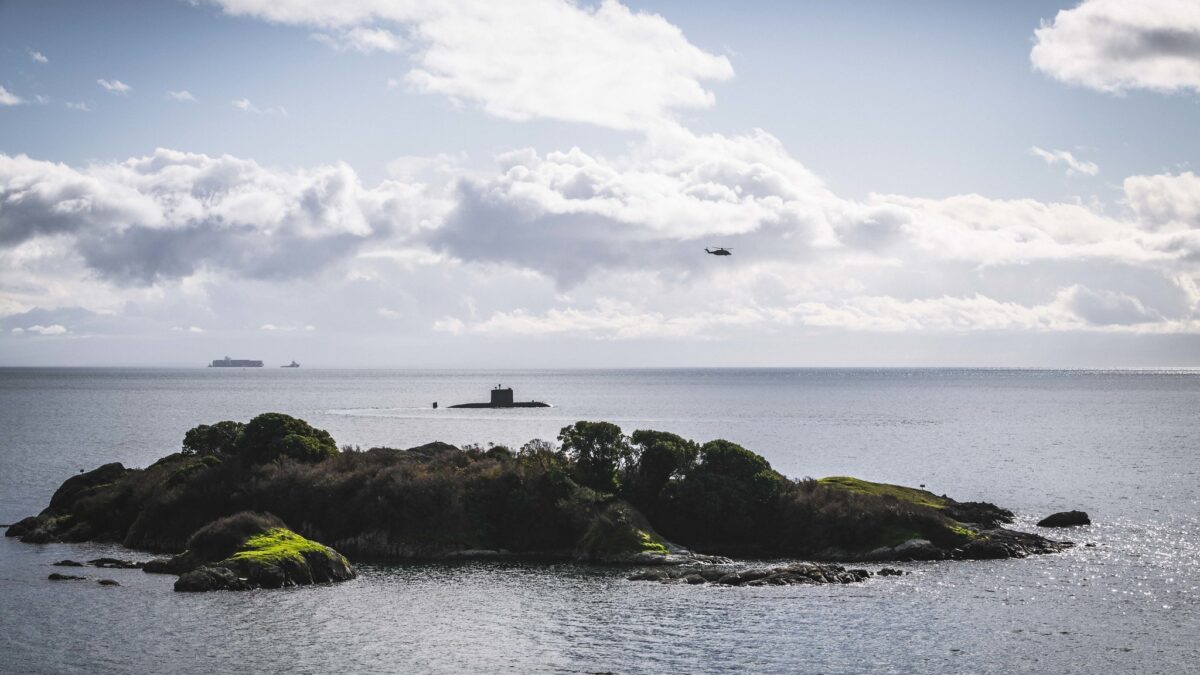 Her Majesty’s Canadian Submarine VICTORIA sails in the vicinity of Esquimalt Harbour while wearing a poppy on its sail in Esquimalt, British Columbia on 5 November 2021. Photo: S1 Kendric Grasby, Canadian Armed Forces
Arctic

As the Commanding Officer of HMCS ALBERTA cleared the bridge while transiting Dixon Channel and dived the submarine, the designer, embarked for this voyage of discovery, reflected on the challenges faced and overcome to evolve the design of the new Canadian submarines of the Canada Class.

The designer reached back and dwelt on the bureaucratic challenges faced in the initial stages. There was the ever-present lobbying by the other services against a submarine acquisition. It was a challenge for naval leadership to overcome the scandals of the 2020s and develop the arguments which persuaded elected officials that a submarine was an irreplaceable strategic capability. These arguments quelled the internal CAF debate though there continued to be attempts to curtail or reduce the programme.

As ALBERTA effortlessly slid under the surface and entered her natural environment a worried frown crossed the designer’s face as memories of the arguments for and against build in Canada nearly created the circumstances for programme failure. Recognizing the nature of Canada’s procurement process the designer understood that time was critically short. Contract award and design approval needed to occur prior to 2030 thus the demanding selection process, with government approval, needed to have been completed in the 2020s yet by 2022 it had yet to begin.

The designer reflected on the challenges within the procurement bureaucracy once approval was obtained. There were those who considered process more important than product and those that could not understand that Canadian requirements were unique to Canada. A design developed for another nation, for a different operating environment, would not and could not meet Canadian requirements. Convincing decision makers that a submarine designed for operations in the Baltic, or the Mediterranean was not the same as a submarine designed for operations in the Atlantic, Pacific, and Arctic oceans was challenging given the land-locked nature of Canadian bureaucratic culture. But the designer also recognized that there were few submarine design houses in the west and in all probability an existing or evolved design would need to be tailored to Canadian requirements.

As ALBERTA entered the North Pacific Ocean the designer reviewed the challenging competitive process. There was a competition, PSPC forced the navy to reduce certain requirements to allow the broadest competition even though some designs were not capable of evolving to meet Canadian needs. Some wanted to focus on an off-the-shelf solution, but the designer knew that such an approach would lead to operational failure. The challenge was to get the procurement authorities to agree that no existing design met Canadian requirements thus the competitive designs would need to evolve. Reflecting on the Australian experience with conventional submarine procurements the designer was able to convince the navy and the procurement authorities that the approach needed was for the competing firms to explain in detail how they would evolve their design to meet Canadian requirements for an operational submarine in the 2040s not the 2020s. This approach forced the competitors to develop a preliminary design to be built in the 2030s that was costed with a preliminary schedule.

Not only was time short but there was a shortage of qualified and experience staff. An integrated team was needed with sufficient expertise, experience, and depth to develop the requirement, evaluate the various proposals, and manage the complex procurement process followed by implementation and delivery of the submarines over a period of 20 years and beyond.  Failure here meant programme and operational failure.

As ALBERTA altered course to the southwest the Designer scanned the interior of the boat and was thankful to have been part of this national endeavour, thankful for the political, naval, and bureaucratic leaders, who over a sustained period, believed in the project providing the necessary resources even, when times were tough. The designer finished his musing and started an inspection of ALBERTA as she silently moved in her natural element.

Capt(N) Ian Parker (Ret’d), a graduate of the Canadian Forces College and the United States Naval War College and who served in the Royal Canadian Navy for 37 years and commanded HMC Ships Fraser and Provider, and a consultant who worked with the defence and security industry for over ten years.

Navigating through COVID-19 in the defence industry