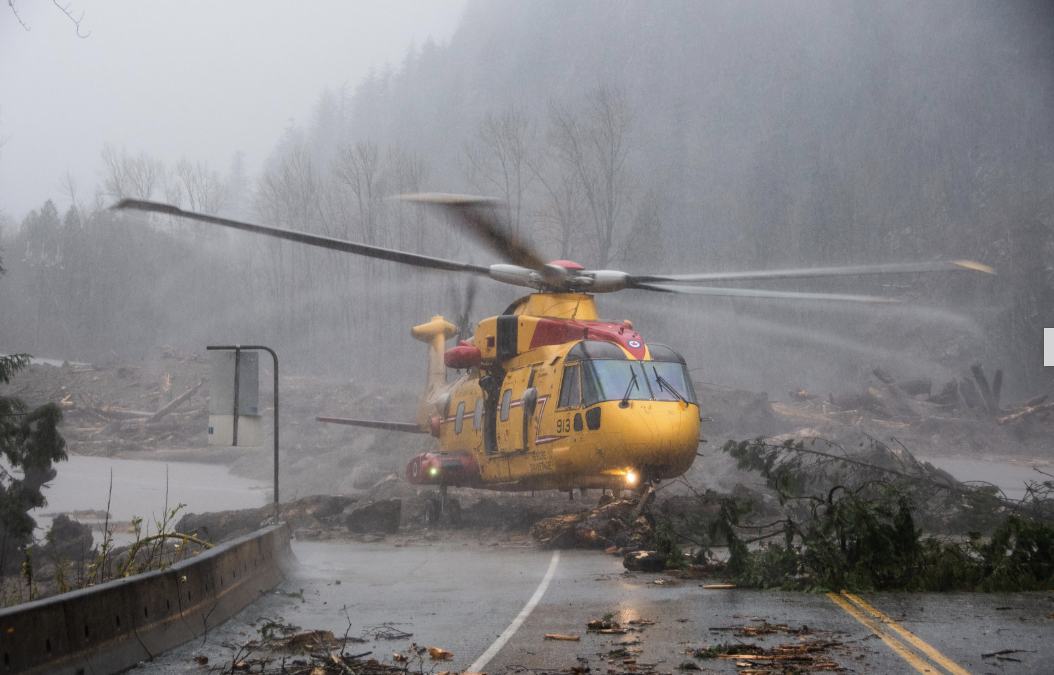 A CH-149 Cormorant helicopter and its crew from 442 Search and Rescue Squadron provide support for Operation LENTUS, evacuating people out of Merritt, British Columbia (BC), after heavy rain triggered mudslides along a BC highway on 15 November 2021. Please credit: Corporal Parker Salustro, Canadian Armed Forces Photo
News

In late December the Canadian Department of National Defence awarded a $1 billion contract to Leonardo (via Leonardo U.K.) for the AW101/CH-149 “Cormorant” Mid-Life Upgrade (CMLU) Project. A total of 16 aircraft will be included in the project. Of the 16, there are 13 existing Cormorant Search and Rescue Helicopter (CSH) currently in-service and a further three will receive augmentation. The project will:

Gian Piero Cutillo, Managing Director of Leonardo Helicopters, stated: “The AW101/CH-149 “Cormorant” Search and Rescue helicopter fleet will provide the Royal Canadian Air Force with the sustainment of a robust, high-tech all weather SAR capability across Canada. The CMLU programme through Team Cormorant will reduce the cost of fleet ownership, while further increasing reliability, capability, and safety for Canadian people.”

The CH-149 Cormorant fleet has had a distinguished 20-years of service and this new contract is considered a mid-life upgrade. The team involved is a collaboration of Leonardo and is supported by its principle Canadian subcontractor IMP Aerospace and Defence together with GE Canada, and Collins Aerospace Canada. A majority of the work will be performed in Canada at IMP’s Halifax, N.S. facilities.

Alessandro Profumo, Chief Executive Officer of Leonardo, commented: “Leonardo is proud to lead with our Team Cormorant partners the AW101/CH-149 “Cormorant” Search and Rescue helicopter fleet upgrade as announced by the Canadian Government. With the Cormorant helicopter the Government is getting the right equipment for the Canadian Forces, at the best price for Canadians, with the right benefits for Canadian industry.”

The ”Cormorant” SAR helicopter is arguably the best search and rescue helicopter in the world and the CMLU Project will transition Canada’s AW101/CH-149 fleet to the latest standard currently being delivered for SAR in Norway. The CMLU Project is intended to enable less search and more rescue with:

July 2022 marked the first operational flight anniversary of the Cormorant which took place in July 2002. The first delivery took place in October 2001. Over the last 20 years the fleet has achieved in excess of 100,000 flight hours. The AW101 is largely considered the most advanced medium lift helicopter available, putting it in great demand. It is a cost-effective multi-mission package that includes long-range capability, large capacity, and advanced technology. The AW101 has seen 220 orders from worldwide customers with a range of roles that include SAR, Combat SAR, Personnel Recovery, Special Forces Operations, utility, troop transport, Anti-Surface Warfare, Anti-Submarine Warfare, Airborne Early Warning, mine sweeping. Around the globe, the AW101 fleet has exceeded 500,000 flight hours in all manner of operations ranging from the Arctic to the Antarctic.

Connecting It All: General Dynamics and AWS Collaborate to Realize JADC2 Vision