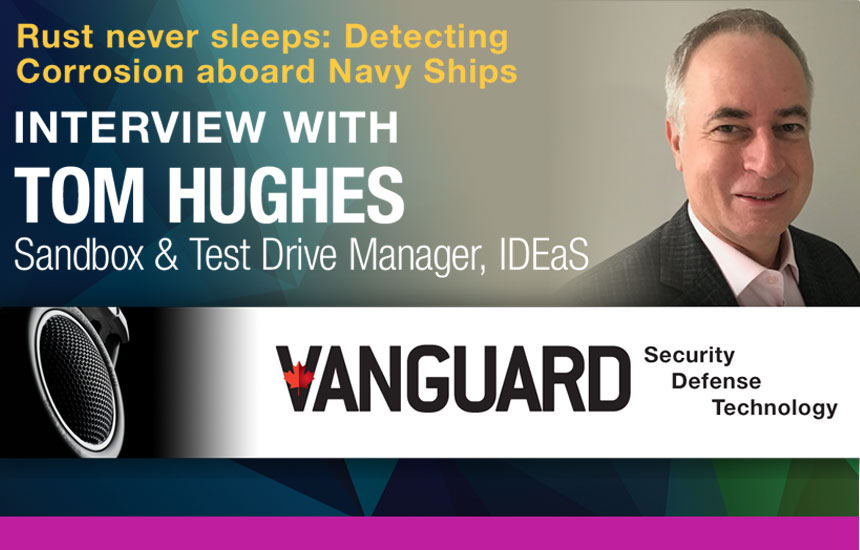 In this episode of Vanguard Radio, we will talk about a major problem that affects naval vessels – that problem is corrosion. How can we detect and assess corrosion behind surface coatings such as paint, insulation, tiles, and seamless decking onboard Royal Canadian Navy (RCN) platforms in order to reduce corrosion’s operational impact and improve the effectiveness of scheduled and unscheduled maintenance?

To tell us more is Tom Hughes, Sandbox and Test Drive Manager for IDEaS (Innovation for Defence, Excellence and Security), a program that was designed to improve DND’s access to the creative potential of Canadian innovators to build an innovation ecosystem for national defence.

Tom Hughes retired from the Canadian Armed Forces in January 2018 after 34 years of service. He joined the Communication Reserves in 1980 and transferred to the Regular Force in 1985 as a pilot. He was then selected to fly search and rescue helicopters and completed tours in Comox, BC and Gander, NL, flying the CH113 Labrador, as well as an exchange posting with the United States Coast Guard in Cape Cod with HH60J Jayhawk, and as the Commanding Officer of 413 Sqn in Greenwood with the CH149 Cormorant.

Tom was also a project director for the Canadian SAR Helicopter acquisition. He went on an operational deployment as the Commanding Officer of Camp Mirage in support of Afghanistan in 2005, he also was an Air Operations Advisor for expeditionary operations headquarters in Ottawa. From 2010 to 2013, he was the Director Strategic Plans for the Royal Canadian Air Force, and from 2013 to 2018, he worked as a Commanding Officer of the Defence Research and Development Canada (DRDC) Military Support Unit. Since January 2018, he has been the Sandbox and Test Drive Manager for IDEaS.

Hear about what Corrosion Detection in Ships (CDIS) Sandbox is all about, how COVID-19 affected this Sandbox, how it’s going to be conducted, scenarios for detecting corrosion, and how the results from this Sandbox be used.

To learn more about the Sandbox, go here.

The Innovation for Defence, Excellence and Security (IDEaS) program is designed to improve DND’s access to the creative potential of Canadian innovators to build an innovation ecosystem for national defence. It transforms defence and security challenges being faced by the various partners in DND/CAF into innovative solutions to improve Canada’s defence capabilities. IDEaS helps innovators move rapidly along the innovation continuum using five funding elements, which include elements like sandboxes and test drives which allow innovators to get direct feedback from members of the Canadian Armed Forces and the Department of National Defence.

Underwater and the Arctic

Episode 30 | Why you need to know about “Deliverology”

A program to help children affected by secondary impact trauma

039 | Are Government systems as secure as they should be?