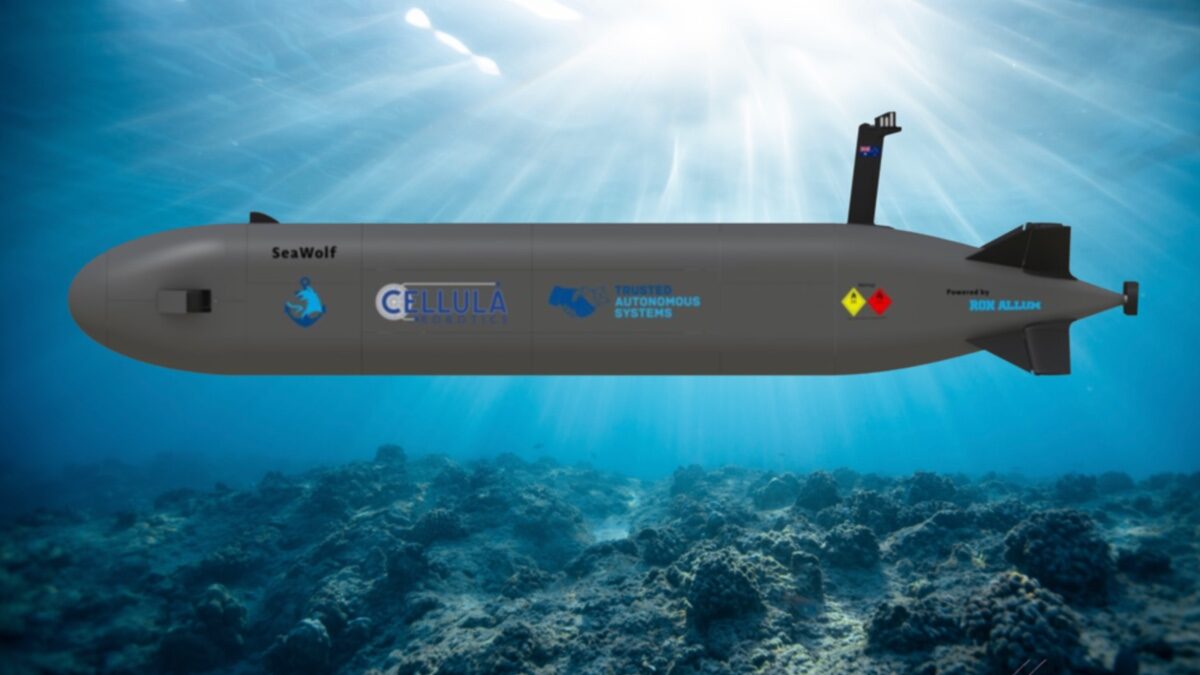 Cellula Robotics has been contracted by Trusted Autonomous Systems (TAS) to develop the next generation of fuel cell powered, Extra-Large Unmanned Underwater Vehicle (XLUUV) in collaboration with sovereign sub-contractors. Debuting in the fourth quarter of 2022, the SeaWolf project will unveil the first 12 meter by 1.7-meter XLUUV hull. The project is funded by the Royal Australian Navy (RAN).

Building on Cellula’s existing Solus-LR system and employing the proven Solus control architecture and software, the SeaWolf project includes a mission range of over 5,000 kms powered by a state-of-the-art fuel cell power system and two modular 2,500-liter flooded payload bays. It is able to be shipped in a single 40’ ISO container. Sub-contracted by Cellula, the prestigious Ron Allum will help develop a thruster and battery system.

As a privately owned Canadian leader in the turnkey design and production of subsea robotic systems and marine technology, Cellula Robotics Ltd. is highly experienced in projects that require integrated mechanical, electrical, hydraulic, and software elements in a subsea environment. Cellula Robotics Ltd. employs 70 staff with a dedicated team of highly skilled engineers, designers, and technicians. Its clients range from defence and oil, gas companies, and mineral exploration firms.

“Cellula is excited to take the DRDC funded Solus-LR project to the next level of capability with TAS and RAN. Our fuel cell power system is the key enabler that gives SeaWolf a game changing submerged range and payload capacity,” said Adrian Woodroffe, Business Development Manager at Cellula.

Although Cellula’s headquarters are based in Burnaby, British Columbia, preparations to establish an Australian office in Brisbane are almost complete. Upcoming steps include Australian-based design and manufacturing. Demonstration missions with Solus-LR will also be prioritized, with the prototype SeaWolf XLUUV to take place in Australia during the first quarter of 2023.

“TAS [is] excited to see the progress on the SeaWolf project across engineering, manufacturing, regulatory, control, propulsion and other supporting technologies and concepts. The novel technologies and demonstrated capabilities at Cellula Robotics made them a partner of choice; and plans underway to establish an Australian Cellula entity will bring them closer to the sovereign enterprises in Australia already working on delivering our concept of an underwater loyal wingman to the Royal Australian Navy,” concluded Professor Jason Scholz, CEO of Trusted Autonomous Systems.