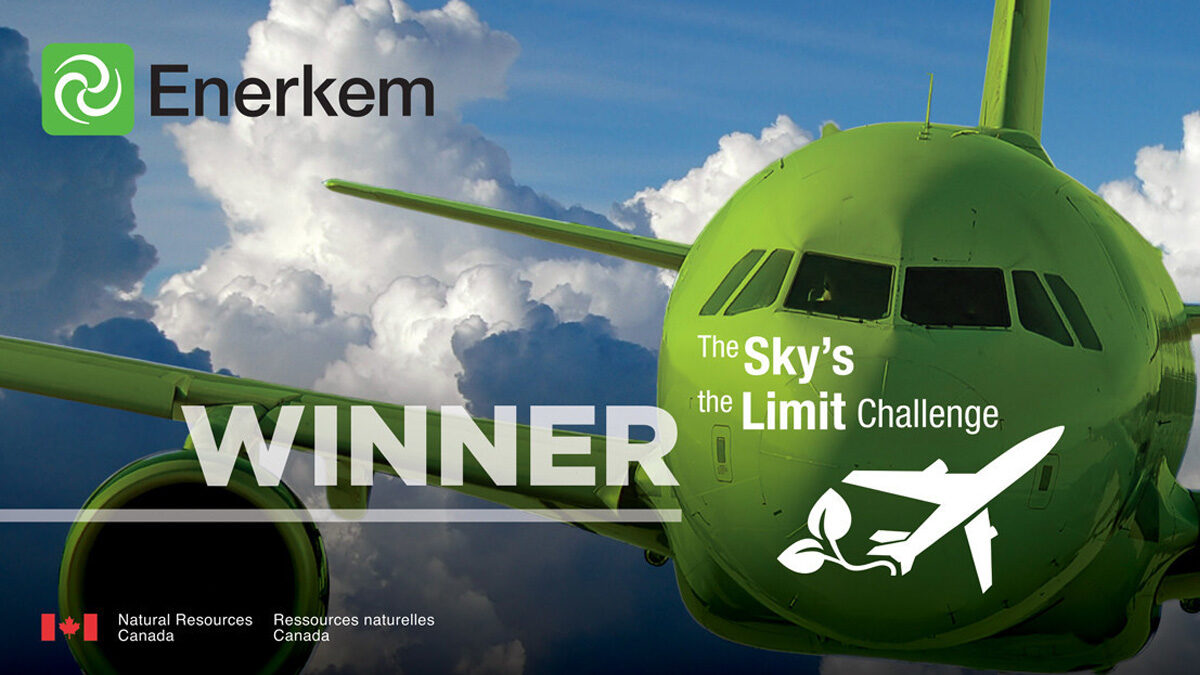 As the project leader in partnership with CRB Innovations, Enerkem has won “The Sky’s the Limit Challenge” hosted by Natural Resources Canada. Selected from four finalists, this prestigious award recognizes Enerkem’s success in producing sustainable aviation fuel (SAF) from forest biomass carbon. The resulting biogenic fuel will contribute to a 93% reduction in GHGs from air transport per unit of fossil fuel replaced by SAF.

Dominique Boies, CEO and CFO of Enerkem, relayed his gratitude regarding this significant achievement:

“I’m extremely proud of the recognition we’ve received from winning ‘The Sky’s the Limit Challenge. In order to reduce the carbon footprint of commercial aviation, we joined forces with CRB and devised a realistic approach based on recognized technologies and using our abundant forest resources in a sustainable way. This was our solution’s core strength, as confirmed by the competition’s panel.”

“Our government challenged innovators to find breakthrough cleantech solutions to help solve some of Canada’s biggest problems — and they delivered. I’m proud to award the grand prize for ‘The Sky’s the Limit Challenge’ to Enerkem and its deserving innovators,” added the Honourable Jonathan Wilkinson, Canada’s Minister of Natural Resources.

“The Sky’s the Limit Challenge” is a national competition that focuses on developing clean, sustainable and economically viable aviation fuel in Canada. Using the competition’s guidelines, participants aim to create a fuel that allows the commercial aviation sector to reduce its carbon footprint. Enerkem has been awarded a $5 million grant to continue commercializing its innovative fuel. As a finalist in 2019, the company received $2 million to develop its technology and compete for the grand prize.

The research leading to the production of sustainable aviation fuel was mostly conducted at Enerkem’s Innovation Centre in Westbury, Quebec, while the rest was carried in collaboration with CanmetENERGY research centre in Ottawa. CRB deconstructed and fractioned the biomass into recoverable intermediaries, and both Enerkem and CRB conducted the research using these intermediaries to produce aviation fuel. These breakthroughs were discovered by Michel Chornet, Executive Vice-President, Engineering, Innovation and Operations at Enerkem, Stéphane Marie-Rose, Director, Catalytic Processes Group at Enerkem, and Esteban Chornet, cofounder of Enerkem and CRB, and scientific director at CRB Innovations.

“The research we conducted as part of ‘The Sky’s the Limit Challenge’ allowed us to develop another source, specifically forest biomass. It has often been described as Canada’s ‘green’ edge. It’s affordable and has been used nationally for generations in various applications,” commented Esteban Chornet. “The carbon in forest biomass comes from the atmospheric CO2 captured and transformed into constituent molecules through photosynthesis. We were able to recover it by combining the technologies of biomass deconstruction and fractionation (CRB), gasification (Enerkem), oligomer production (Enerkem and CRB) and catalytic hydrocracking by Enerkem, as well as by CRB/Canmet. As a result, we managed to produce sustainable aviation fuel (SAF) allowing GHGs from air transportation to be reduced by 93 percent.”

Another project from Enerkem to produce aviation biofuels from sorted urban waste in Rotterdam, Netherlands, is currently in the works. Partnering with Shell, Enerkem’s project uses processes that differ from the forest biomass method. Canadian, U.S., and European jurisdictions are already beginning to certify the process of aviation fuel produced from forest biomass.

“Demand for sustainable fuels is very strong across all transportation sectors,” claimed Dominique Boies. “In order to fully benefit from the production of these fuels, commercial aviation must be able to integrate their cost into its current rate structure. Otherwise, the biofuels produced will go to other promising markets.”