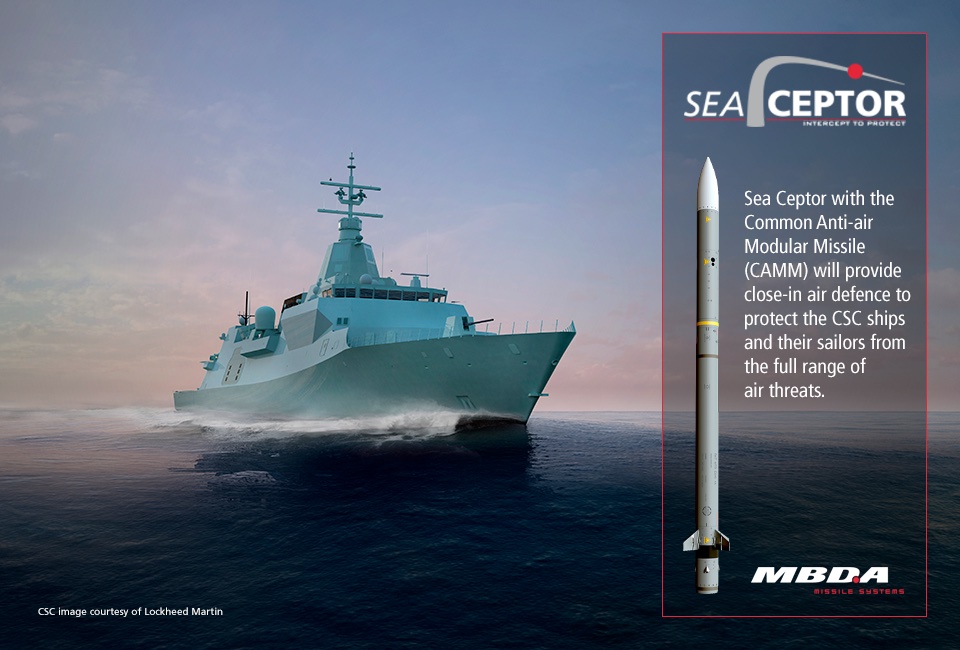 According to the release, by utilising the Common Anti-air Modular Missile (CAMM) as its effector, Sea Ceptor will undertake the Close-In Air Defence System (CIADS) role on-board the new CSC frigates.

The Sea Ceptor will be integrated with Lockheed Martin Canada’s Combat Management System 330 (CMS 330) as part of a multi-tier air defence capability. The CAMM missiles will be quad-packed in Lockheed Martin’s Extensible Launcher System (ExLS), which is part of the Mk41 family of vertical launcher systems.

Through its role in the CSC, MBDA will create a positive impact on the Canadian defence industry and its supply chain through Canada’s Industrial and Technological Benefits (ITB) policy. With this contract, MBDA will provide significant investment in research and development to Canada across a wide range of technologies, such as AI, cybersecurity, and advanced materials.

This investment will support high technology jobs across small and medium-sized enterprises (SMEs), academia, and other key industries in Canada.

The Sea Ceptor and CMS330 are already providing world-class air defence capabilities to the Royal New Zealand Navy and the Chilean Navy and this new contract will further strengthen the partnership between MBDA and Lockheed Martin Canada.

“We are delighted to be awarded this contract, and to play a part in contributing to such an important programme to Canada,” said Éric Béranger, CEO of MBDA. “Sea Ceptor delivers next-generation technology that will help protect the men and women of the Royal Canadian Navy as they carry out their missions around the world on-board the advanced new CSC frigates.”