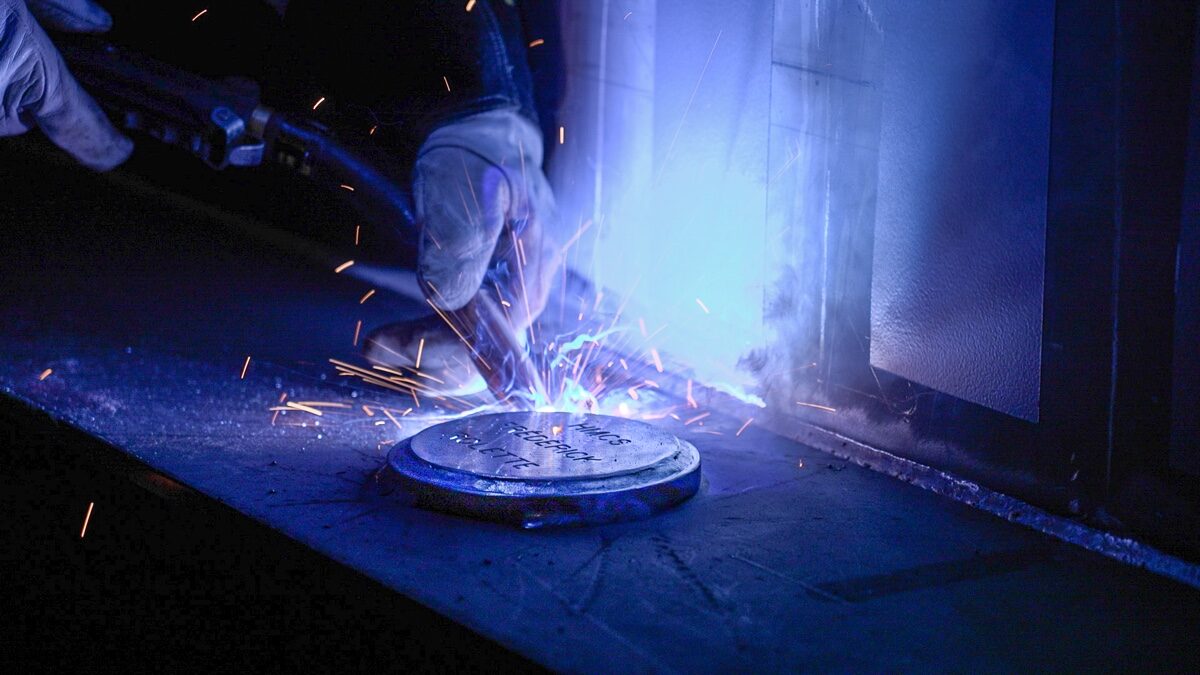 A coin welded to the hull of a ship during its keel-laying ceremony is a centuries-old tradition dating back to ancient Rome. The coin symbolizes good luck for the captain and crew of the ship. The coin presented by the Royal Canadian Navy was presented by Rear Admiral Brian Santarpia, Commander of Maritime Forces Atlantic (MARLANT) and Joint Task Force Atlantic (JTFA), and welded in place by Eric Theriault, a French Canadian from Belliveau Cove, Nova Scotia, whose Acadian roots date back generations. Rear Admiral Brian Santarpia officially declared the hull “well and truly laid” towards the end of the ceremony.

“I’m excited to be here today to mark the keel laying of Canada’s fifth Arctic and Offshore Patrol Ship, the future HMCS Frédérick Rolette,” he said. “Naming the ship after Frédérick Rolette is an inspiring choice for our sailors. While serving as a young officer in the ‘Provincial Marine’, Lieutenant Rolette took action at the outset of the War of 1812 with his early capture of the American vessel, the Cuyahoga. It was a significant prize for the British. Lieutenant Rolette’s spirit of gallantry and dedication lives on today in our proud and professional young sailors. With this addition to the Harry Dewolf-class ships, the Royal Canadian Navy will continue to excel at sea and provide outstanding capabilities in support of Canadian interests both at home and abroad.”

Born in Québec City on September 23, 1785, Charles Frédérick Rolette joined the Royal Navy as a midshipman during his teenage years. His reputation as a bold and clever officer strengthened during the War of 1812. Near the American border on the south shore of the St. Lawrence River, roughly 50 km southeast of Montmagny, Québec, lies the historical Canton of Rolette, established in 1868 in his memory.

Rolette was posted to Amherstburg, Upper Canada (now known as Ontario) just before the outbreak of the War of 1812. There, he was named Lieutenant in command of the brig called General Hunter. Once word of the outbreak travelled to Amherstburg on July 3, 1812, Rolette sprang into action by capturing an American vessel called the Cuyahoga before the American crew realized that their country had declared war on Britain. The Cuyahoga became the main carrier of the American commander General William Hull’s papers and dispatches, securing it as the first action of the War of 1812. Rolette’s quick thinking successfully provided the British with early intel on American strength and deployment.

In recognition of Lieutenant Rolette’s valiant efforts and to honour his memory, the coin chosen for the ceremony is the 2014 silver five-dollar Lion on the Mountain. Ever since ancient humans painted prides of hunting lions in caves more than 30,000 years ago, the lion has been attributed to protection, military might, royalty and supernatural power. It is one of the most common heraldic symbols in the world, used in emblems, arms and currency of hundreds of nations worldwide.

The symbolism of the lion is also connected to Major-General Isaac Brock’s praise for Rolette’s conduct at the capture of Detroit: “I have watched you during the action. You behaved like a lion, and I will remember you.”

This praise, amongst others where Rolette was mentioned in dispatches by senior military officers on several occasions during the war, was significant, as it was not yet common at the time to award medals to military personnel in recognition of conspicuous gallantry.

“…The building of this ship will take 47% fewer hours than the first ship, HMCS Harry DeWolf. We look forward to delivering this ship to the Royal Canadian Navy in December 2024. Steel cutting for the final Arctic and Offshore Patrol ship – the future HMCS Robert Hampton Grey (AOPV 6) – will start this August,” added Ross Langley, Vice Chairman of Irving Shipbuilding. “Our team’s commitment to those who bravely serve is a quality fleet of new combat ships as quickly as we can build them. We remain focused on 2024 and the start of construction for the Canadian Surface Combatants.”

Currently, Halifax Shipyard is completing six Arctic and Offshore Patrol Ships for the Royal Canadian Navy. After this, they plan to build two AOPS variants for the Canadian Coast Guard, followed by 15 Canadian Surface Combatants for the Navy.

Ships for Canada at the Halifax Shipyard has delivered over $4.7 billion to date in investments across Canada. They have also generated over 8,300 jobs (direct and indirect) and counting. Halifax Shipyard is continuing to hire as it prepares to build the Canadian Surface Combatants in 2024.