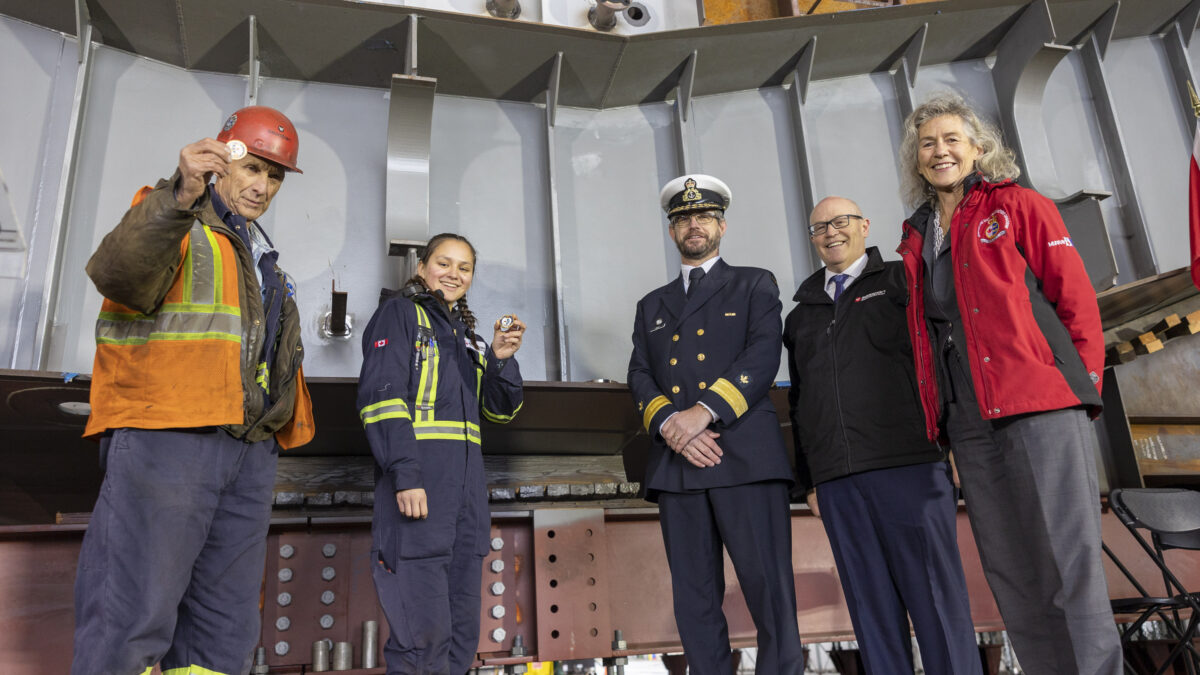 Seaspan Shipyards is Canada’s long-term, strategic shipbuilding partner for large non-combat vessels. Under the National Shipbuilding Strategy (NSS), and in conjunction with the Canadian Coast Guard, they recently reached an important milestone in the construction of the Offshore Oceanographic Science Vessel (OOSV).

Seaspan proudly hosted the Honourable Joyce Murray, Minister of Fisheries, Oceans and the Canadian Coast Guard and Member of Parliament for Vancouver Quadra along with representatives from the CCG at the recent keel laying ceremony for the OOSV in North Vancouver, BC.

“Today’s milestone means Canadian Coast Guard personnel and Fisheries and Oceans Canada scientists are once again looking forward to state-of-the-art equipment to carry on their critical work for the benefit of all Canadians. The new OOSV will serve as the main platform for ocean science to help us understand and chart our seabed, protect our marine environment, and restore the health of our oceans. Congratulations to Seaspan’s Vancouver Shipyard workers as they reach this important milestone for this new ship,” said the Honourable Joyce Murray, Minister of Fisheries, Oceans and the Canadian Coast Guard.

During this significant milestone in a ship’s construction process a coin is placed near the keel and there it will remain for the duration of the ship’s life. The coin represents good luck for the builders and all those who sail in the vessel. The specific coin used at this ceremony was one specially created to commemorate the CCG’s 60th anniversary, honouring the many decades of the CCG’s service to Canadians from coast to coast to coast.

Mario Pelletier, Commissioner, Canadian Coast Guard, expressed that,“as the Canadian Coast Guard’s 60th anniversary celebrations are still ongoing, I find it very fitting to have a keel laying for the future Offshore Oceanographic Science Vessel. Our past has been celebrated throughout the year, and today we look forward to the OOSV navigating the future of oceanographic science work in Canada. I wish good fortune to all who will come aboard this vessel in the future.”

The role of the OOSV is to provide an oceanographic science platform for a broad range of Canadian Government departments and scientists, delivering much-needed fleet capability in this area. The vessel will support a wide range of oceanographic, fishery, geological and hydrographic survey missions that will serve to advance scientific knowledge about the oceans, the seabed, and the impacts of climate change, ultimately helping lead to healthier, more sustainable ocean ecosystems. This is a key priority of the Canadian Government’s Blue Economy Strategy.

Essentially a floating laboratory, the OOSV will be outfitted with specialized equipment including several advanced wet and dry labs, an ocean sampling room, a scientific seawater system for studying oxygen levels, temperature and salinity, and a state-of-the-art drop keel and sensor suite for collecting and analyzing data on everything from water current velocities to underwater acoustics. Additionally, search and rescue operations and environmental response operations will be conducted by the ship as needed by the CCG.

As a result of the NSS, Seaspan is not only building and delivering state-of-the-art ships, but they are also delivering significant strategic socio-economic benefits. They are working rebuild the Canadian marine industrial sector by creating thousands of jobs, developing a supply chain of more than 700 suppliers, and so far, generating more than $2.6 billion in economic activity across the country.

“Through our partnership with the Government of Canada on the National Shipbuilding Strategy, Seaspan is proud to contribute to our country’s sovereignty, economy and self-sufficiency. With the Offshore Oceanographic Science Vessel, we are progressing through construction of the third fleet of NSS vessels Seaspan will build, and we are delivering on our commitment to rebuilding a strong marine industry in Canada. Today’s construction milestone reflects the resiliency of all the talented and dedicated Seaspan employees and supply chain partners across Canada. I am incredibly proud of how we consistently drive forward to deliver for our partners and customers – adapting, innovating and applying the lessons of our culture of continuous improvement,” concludes John McCarthy, Chief Executive Officer, Seaspan Shipyards.