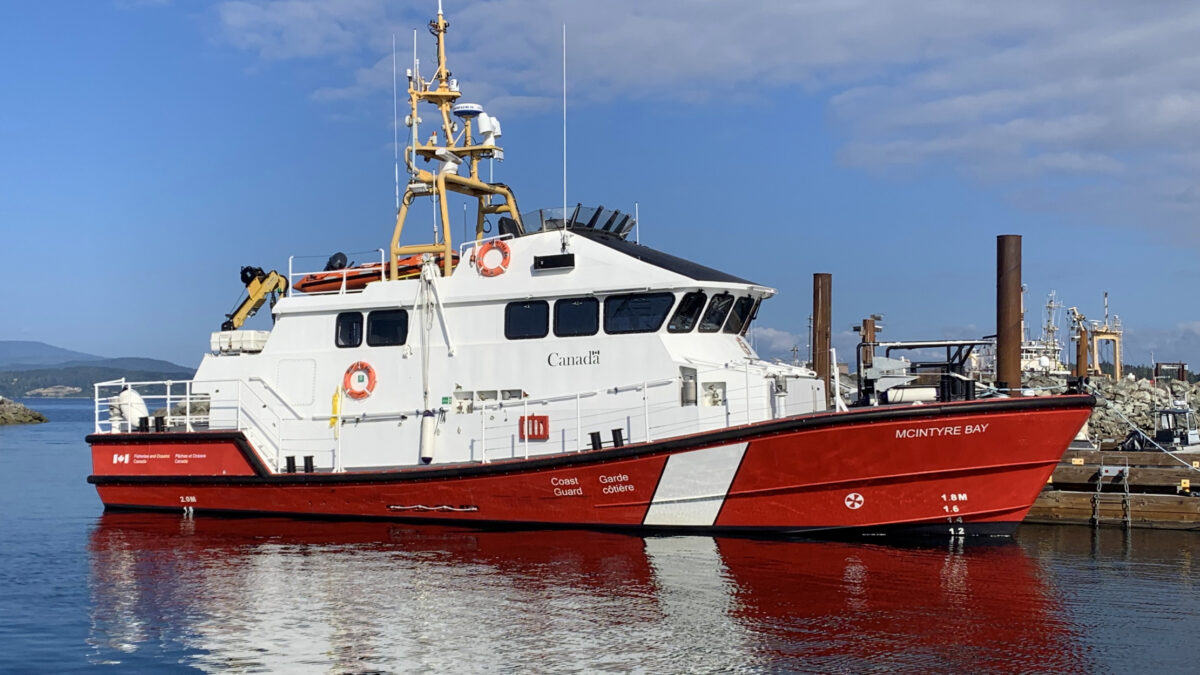 The role of the Canadian Coast Guard (CCG), ensuring the safety of mariners and protecting Canada’s marine environment, is more critical than ever. For this reason, the National Shipbuilding Strategy makes it a priority to provide the CCG with the vessels they need to deliver their critical services.

Most recently, the Canadian Coast Guard Ship (CCGS) McIntyre Bay was officially welcomed into service during a dedication to service ceremony held at the harbourfront in Prince Rupert, British Columbia.

“The CCGS McIntyre Bay is just one of the vessels in this class built by Canadians for Canadians. Our government supports the Canadian Coast Guard’s critical work in keeping people safe on the water while protecting Canada’s marine and coastal environment,” expressed the Honourable Joyce Murray, Minister of Fisheries, Oceans and the Canadian Coast Guard.

Assistant Commissioner, Canadian Coast Guard Western Region, Derek Moss, was joined by the Vessel Sponsor, for the traditional breaking of a ceremonial bottle upon the ship’s bow. The Canadian Coast Guard is proud to have Mrs. Lorie Palmer as the sponsor for the CCGS McIntyre Bay. A civilian is traditionally invited to sponsor a vessel for its well-being and continued service, and to wish the vessel “good luck”. Ms. Palmer is a long-time business owner and active member of the Prince Rupert community. She is also deeply connected to the Canadian Coast Guard family, having served as home-front support to both her father and her husband Les,  both key members of the Canadian Coast Guard for many years.

The CCGS McIntyre Bay has been operating in British Columbia since 2019. It is a high endurance self-righting search and rescue lifeboat. Now stationed at the Canadian Coast Guard’s Prince Rupert station, its operational area includes Chatham Sound, Dixon Entrance, and Northern Hecate Strait.

The CCGS McIntyre Bay is specifically designed, equipped, and crewed to respond to search and rescue and environmental response incidents. It will maintain a maximum 30-minute state-of-readiness, operating 100 nautical miles from shore, and will be ready to respond the moment an alert is received.

Other vessels just like the CCGS McIntyre Bay are being stationed across Canada. They will provide key services that include searches on the water, responding to marine distress response calls, environmental response operations as well as assistance to disabled vessels.