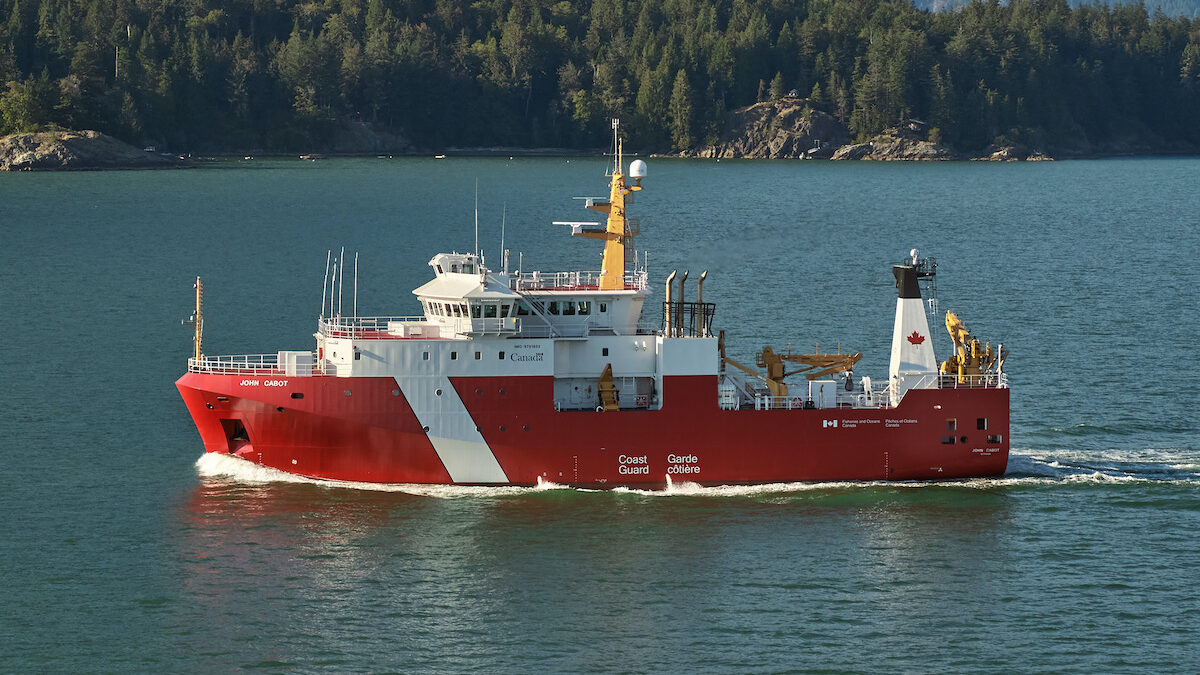 On October 9, 2020, Seaspan Shipyards officially delivered to the Canadian Coast Guard the third state-of-the-art Offshore Fisheries Science Vessel (OFSV) under the National Shipbuilding Strategy (NSS). This is the third OFSV delivered by Seaspan Shipyards in the last 15 months and completes the first full class of large vessels under NSS. The third vessel, CCGS John Cabot joins her sister ships CCGS Capt Jacques Cartier and CCGS Sir John Franklin, which are already in service.

Delivering the third OFSV marks a string of achievements for the Seaspan Shipyards team and suppliers who developed innovative approaches to successfully launch and complete CCGS John Cabot during the COVID-19 pandemic. The vessel was launched on July 3 in Vancouver by Dr. Bonnie Henry at 97 per cent completion, a rare accomplishment that exceeded international benchmarks. Six weeks after, sea trials began, which is also considered best-in-class in the shipbuilding industry.

“We are incredibly proud today to deliver CCGS John Cabot, the third Offshore Fisheries Science Vessel and the first full class of ships delivered under Canada’s National Shipbuilding Strategy,” said Mark Lamarre, Chief Executive Officer, Seaspan Shipyards. “This delivery is a powerful reminder that shipyards don’t build ships – people do. CCGS John Cabot was completed, launched, and delivered during a time like no other and this success is a tribute to the tremendous ingenuity, innovation, and teamwork by our employees, suppliers, and Coast Guard partners. It’s also a sign of how the NSS is accelerating industry momentum, enabling us to build not only ships but also a world-class pan-Canadian marine industry supply chain supporting thousands of jobs from coast to coast.”

Due to COVID-19 protocols, the traditionally large public celebration that accompanies official handover ceremonies of vessels was not possible. A small official party of Coast Guard and Seaspan Shipyards officials were present at the handing over of CCGS John Cabot.

“On behalf of the Canadian Coast Guard, I am very proud to welcome the third Offshore Fisheries Science Vessel, CCGS John Cabot, to our fleet,” said Mario Pelletier, Commissioner of the Canadian Coast Guard. “This vessel and her two sister ships will provide important platforms for scientific research while also supporting search and rescue and environmental response. Congratulations to the skilled workers at Seaspan Shipyards and everyone who contributed to the design and the construction of these ships.”

After a transition period under her new Coast Guard commanding Officer and crew, the CCGS John Cabot will set sail to her home port in St. John’s, Newfoundland and Labrador, where she will support scientific research, search and rescue operations, and environmental response.

“Today the Government of Canada marks a significant milestone in its commitment to reinvest in the Canadian Coast Guard fleet,” said Minister Bernadette Jordan, Minister of Fisheries, Oceans, and the Canadian Coast Guard. “With the delivery of the CCGS John Cabot, we are ensuring that Fisheries and Oceans scientists and the Coast Guard have a modern platform including the equipment and technology they need to conduct vital scientific research, as well as support Coast Guard programs and services. I would like to congratulate Seaspan Shipyards for their outstanding work and dedication to the completion of the three new Offshore Fisheries Science Vessels.”

The OFSV is fully equipped to support Fisheries and Oceans scientists in the collection and analysis of data on Canada’s marine ecosystems and the impacts of climate change. This floating laboratory features a full suite of state-of-the-art systems, including a deployable sensor-laden drop keel, high-tech fishing trawls, and four science labs — a wet lab, a dry lab, an ocean lab, and a control lab.