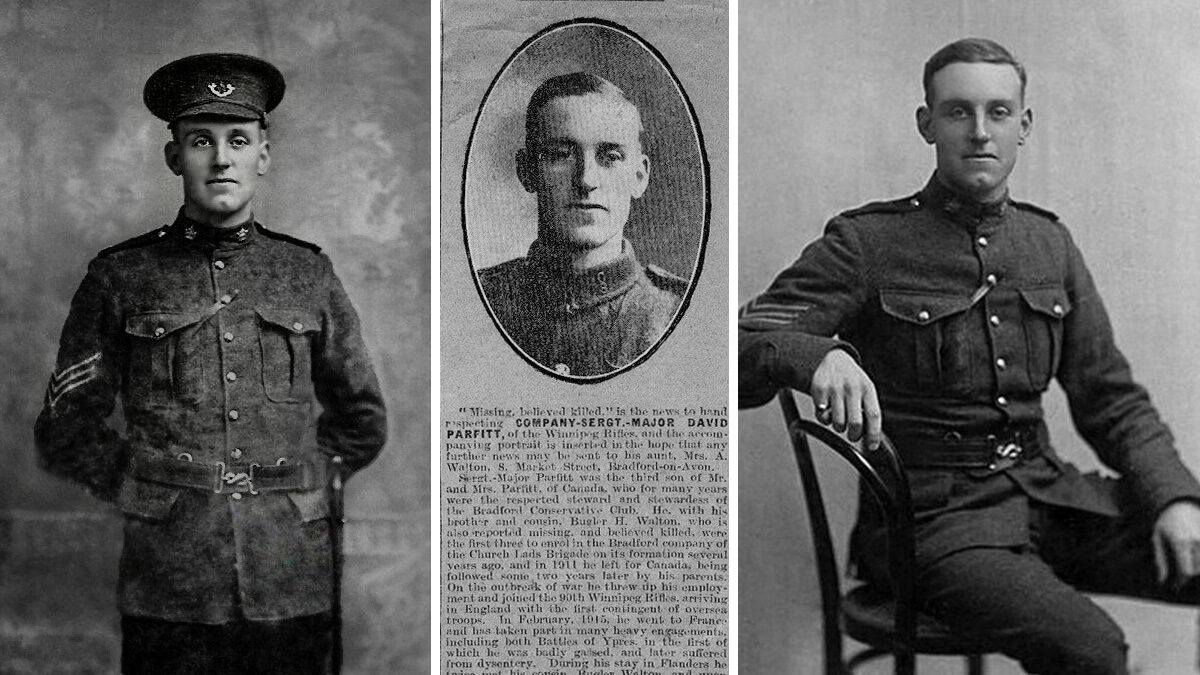 The Department of National Defence announced that a previously unknown soldier, Company Sergeant-Major David George Parfitt, has been identified as a Canadian soldier of the First World War. His headstone in Regina Trench Cemetery, Grandcourt, France, identified him only as an unknown sergeant-major of the 8th Canadian Infantry Battalion.

Born in London, England, in 1891 and immigrated to Canada at the age of 18, David George Parfitt was a mill worker in Keewatin, Ontario. He resided there before his enlistment in Valcartier, Quebec. Three of his brothers – William (Royal Canadian Navy), Arthur (Canadian Expeditionary Force) and Frederick (British Army) – enlisted as well. All three brothers survived the war.

“We remember the courage of the Canadians who served our nation both at home and overseas in the First World War. The successful identification of Company Sergeant-Major Parfitt is a reminder for all Canadians of the ultimate sacrifice made by many in service to our nation. To the family of Company Sergeant-Major Parfitt, know that Canada honours him and is grateful for his service,” commented The Honourable Anita Anand, Minister of National Defence.

The Directorate of History and Heritage received a report from the Commonwealth War Graves Commission (CWGC) detailing the potential identification of Grave 16, Row G, Plot 7 in the Regina Trench Cemetery, in Grandcourt, France. Researchers had raised the possibility that this grave belonged to Company Sergeant-Major Parfitt.

After conducting extensive archival research, the CWGC and the Directorate of History and Heritage confirmed the findings of an independent researcher in November 2019. The Casualty Identification Review Board—which includes representatives from the Canadian Forces Forensic Odontology Response Team and the Canadian Museum of History—verified this identification.

The Canadian Armed Forces (CAF) has notified the family of Company Sergeant-Major Parfitt that he has been identified, and is providing the family with support during this time. A headstone rededication ceremony will take place at the earliest opportunity at the Commonwealth War Graves Commission’s Regina Trench Cemetery, in France.

“Company Sergeant-Major Parfitt was one of our own – a Canadian soldier who fought for our country with honour during the First World War,” added The Honourable Lawrence MacAulay, Minister of Veterans Affairs and Associate Minister of National Defence. “His name is engraved on the base of the Canadian National Vimy Memorial along with those of the more than 11,000 of his comrades who were posted as ‘missing, presumed dead’ in France. Now that his grave has been identified, I’m pleased to know he will receive a permanent headstone to commemorate his courage, service, and ultimate sacrifice.”