We are excited to share with you the October/November 2019 edition of Vanguard. In this issue, read more about FAcT and RPAS as Canada continues to equip the Canadian Armed Forces, the Space Problem, and the future of Aerospace in Canada.

Canada, the Space Debris Problem, and the Future Debris Mission
By Kiernan McClelland

Please click on the image below to view this edition. 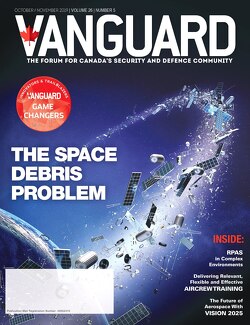