The push for the Arctic

The Arctic region has been in the defence headlines a lot of late. Covering a total area of approximately 14 million square kilometres, the Arctic is a highly sought expanse due to its rich natural resources. The United States Geological Survey estimates that up to 25 per cent of the world’s remaining oil and natural gas resource might be held within the seafloor of the Arctic. According to Geology News and Information, significant quantities of other mineral resources might also be present.

Having control of this region is a valuable asset for the Arctic nations: Canada, Greenland, the United States, Russia, Iceland, Norway, Sweden, and Finland. And the warming climate is opening greater access to the region for commercial navigation and exploration.

On the Canadian side, the Arctic covers over 40 per cent of our landmass and is where over 100,000 Canadians live. As the other nations, especially Russia, try to dominate the Arctic, Canada must continue to exercise its sovereignty in the region.

In this issue, we allocated some space to the Arctic. In their piece, “Icebreakers and the Battle for the Arctic,” Jeremiah Jacques and Marcello Sukhdeo write about the growing threat from Russia as they build up their icebreakers fleet to have greater control of the region. Read more about their expansion in the region and how it is boosting the Russian economy. What should the other Arctic nations do, especially Canada?

In continuing this theme, Troy Bouffard and Andrea Charron write about the U.S. and Canadian military Arctic strategies and show how they are much more similar than different. They make the point that Canada and the United States are not at odds with each other when it comes to the Arctic.

The Canadian Surface Combatant (CSC) project is another hot topic in defence. Recently, we had the opportunity to interview Commodore Luciano Carosielli, Project Manager, CSC and Scott Leslie, Director General, Large Combat Ship Construction Sector, Public Services and Procurement Canada (PSPC). Cmdre Carosielli talks about the requirements reconciliation phase of CSC, opportunities for the industry, the next steps in the CSC project, and the modifications of the Type 26 design to meet Canada’s requirements.

In his interview, Scott Leslie shares some lessons from the National Shipbuilding Strategy (NSS), the benefits of Canada’s approach to NSS – a program-focused approach – identifying areas to guide future complex procurements and tips industry can use to pursue government contracts.

Other articles in this edition include a look at the Royal Canadian Navy’s Canadian Leaders at Sea (CLaS) program, which is geared to help Canadian leaders in public life, business, academia and media understand the RCN’s role in defence, security and prosperity. Col Pierre Leblanc (Ret’d) asks the question in his article if the RCN is missing a great opportunity by not having any plans to install multi-beam echo sounder (MBES) on the Arctic Offshore Patrol Ships, which are currently under construction.

To close off the issue, we are excited to announce our Game Changers: James Castle, CEO, President & Founder of Terranova Aerospace and John Newton, Managing Director of Fleetway Inc. Be sure to check out these interviews of executives who are leading game-changing initiatives in their respective companies to make a difference in the industry. 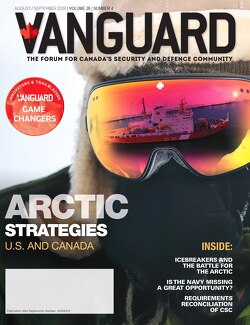