The buzz around procurement for the Canadian Armed Forces

A few weeks ago, I attended the Canadian Association of Defence and Security Industries’ major event of the year – CANSEC. As Canada’s largest defence trade show, CANSEC has been instrumental in bringing both local and international companies to showcase their innovative solutions for Canada. This year there was a slew of equipment, technologies and innovative solutions on display with a real buzz in the air around procurement.

During her speech at CANSEC 2019, Carla Qualtrough, Minister of Public Services and Procurement and Accessibility, provided an update on procurement for the Canadian Armed Forces. Some of the updates included: Remotely Piloted Aircraft System (RPAS), of which they are working with qualified suppliers to review and refine preliminary requirements; the purchase of three Beechcraft King Air 350 aircraft with integrated systems for the Manned Airborne Intelligence, Surveillance and Reconnaissance (MAISR) project; refining the Request for Proposals (RFP) for the Future Aircrew Training (FAcT) Program; and in two months, the expected release of the RFP for the Future Fighter project. She also spoke about building 18 new large ships for the Canadian Coast Guard, with Irving building two new Arctic Offshore Patrol Ships that will be adapted to perform a range of critical missions, and Seaspan building 16 Multi-Purpose Vessels. Procurement surely is moving in Canada, and progress is being made on Strong, Secure, Engaged, as we reported on in our last issue.

With the emphasis on procurement in this issue, we have two interviews that delve into this theme. We were able to secure an interview with Captain(N) Jason Armstrong, Director Naval Requirements, Royal Canadian Navy before he moved on to his new role. He talks about the Victoria-class Modernization (VCM) program, unmanned aircraft systems, Naval Inshore Support Vessel, and much more. The other interview is with Lieutenant Colonel Ian R Graham, Director of Land Requirements 4, Department of National Defence. He talks about Initiative 42 in Strong, Secure, Engaged of modernizing the C2ISR systems of the Canadian Army, managing the disconnect between programs, delivering a coherent C4ISR system, and the challenges of project approval processes.

Talking about Victoria-class submarines, we’ve created a Dashboard on Canada’s submarines with a look at the four submarines in the Royal Canadian Navy’s fleet. This infographic provides an overview of the different submarines and timeline from the time of purchase by Canada.

Cyber continues to be a topical issue. Nicholas Scheurkogel, Director, Cyber Intelligence at Cytelligence, writes about the significant investments needed to fight against cyber threats and overcome the challenges of tools, personnel, time and cultural change. While the levels of investment and support inspire hope, he points out that the potential to narrowly focus on capabilities presents risks by causing a separation between supporting and operational functions in terms of funding, requirements, and authorities.

In continuing our theme on defence procurement in this edition, we provide an update on the future of shipbuilding. This topic was covered at Vanguard’s ShipTech Forum held earlier in the year. At the conference, various speakers discussed topics such as: digital navy, digital twin, the lessons from the National Shipbuilding Strategy, and how we can incorporate that into future shipbuilding.

I would like to close by highlighting our Game Changers for this issue: Wayne McKay, Galley Design Specialist, Smart Galley Designs; Ashley Meyers, President, Co-Founder & Chief Operating Officer, AntoXa Corporation; and Glenn Walters, Global Membership Committee Chair, SNAME (Society of Naval Architects and Marine Engineers). Please take the time to read about these leaders in their respective fields and how they are changing the game within the industry. 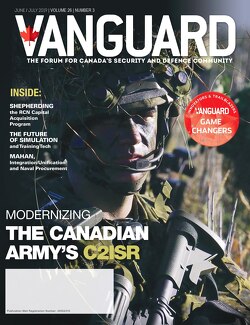