The progress to date on Strong, Secure, Engaged

In June 2017, the Government of Canada released its new defence policy, Strong, Secure, Engaged (SSE), designed to guide defence priorities over the next two decades. This new policy is built on providing support to the brave men and women of the Canadian Armed Forces (CAF) and equipping National Defence to meet Canada’s defence needs locally and internationally. By the mid-point of SSE, Canada will increase spending by more than 70 per cent, investing in new capabilities and modernizing legacy equipment to meet the demands of modern security.

As we approach the end of the second year since the release of SSE, we’ve decided to take a look at Canada’s defence policy to gauge the progress made to date, the current initiatives in place, and what are the next steps that are required to ensure that Canada effectively delivers on this policy.

A major part of the investment over the 20-year period is allocated to the Royal Canadian Air Force (RCAF) to acquire a new fleet of fighter aircraft, multi-mission aircraft, air-to-air tanker-transport, remotely piloted systems and space capabilities. To coincide with our theme on providing an update of SSE, we’re excited to share an exclusive interview with Colonel Jason Kenny, Director of Air Requirements for the RCAF. In this piece, Col Kenny talks about the impact of SSE on his job, the progress being made on SSE within the RCAF, projects that are in the pipeline, capabilities for the new advanced fighter aircraft, an update on the Remotely Piloted Aircraft System (RPAS) project and more.

In his two-year review of SSE, Dr. David Perry, a senior analyst and a fellow with the Canadian Global Affairs Institute, evaluates the Trudeau government’s record of delivering on its defence policy. He notes that even though capital spending is not to the level originally anticipated, the total defence spending is meeting the policy’s expectations.

From a cyber perspective, Valarie Findlay, senior-level expert in cybersecurity and policing initiatives, writes in her article that SSE reaffirms Canada’s commitment to technology as a vital instrument and investment for military operations, and longstanding alliances and partnerships will ensure the CAF has the necessary tools to achieve their mandate through short and longer term defence goals. She also explains that the policy shows an extensive analysis and adoption of cyber as a broad-based utility and core capability in the efficient, effective and safe operation of our military, as it continues to ensure our national security.

Innovation is an important aspect of SSE, and through the launch of Innovation for Defence Excellence and Security (IDEaS) program, Canada is working with experts and innovators to facilitate the development and adoption of new capabilities for the CAF. In this issue, we have an article on IDEaS, it’s operation, opportunities, how the program works, and where it is headed as we completed the first year of this innovative program.

In this issue, we are excited to share a veteran’s story – Lieutenant-Colonel Brad White, who served over two decades in the CAF and led a squadron of over one hundred well-trained army soldiers in Germany. In this article, he shares lessons from his days in the field, the low point of losing others in battle, and his transition back to civilian life.

To view the digital version of this edition, please click on the image below. I hope you enjoy reading this issue. 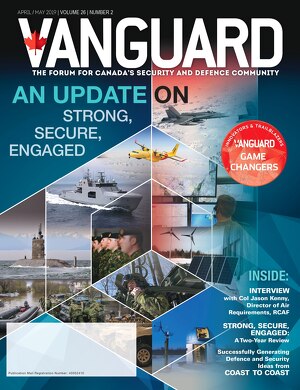