Removing the “boom and bust” periods of shipbuilding

During the previous two decades, shipbuilding in Canada had virtually ceased. With no new significant orders, local shipyards were becoming obsolete and the workforce was shrinking. However, in 2010, new life was injected into the marine industry with the announcement of the National Shipbuilding Procurement Strategy, later renamed as the National Shipbuilding Strategy (NSS). The Government of Canada decided to invest in the marine industry to build new vessels for the Royal Canadian Navy (RCN) and the Canadian Coast Guard (CCG).

This long-term domestic shipbuilding strategy has provided many benefits to Canada, which include the creation of jobs, equipping the RCN and CCG with modern ships, boosting the marine industry and ensuring Canada’s sovereignty is intact. Through this strategy, the government intends to remove the “boom and bust” periods of shipbuilding that slowed down the marine industry in the past.

The implementation of such a major strategy takes time, but even though progress has been slower than planned, the NSS is in full swing.

In this issue, we dedicated a fair amount of space to highlight the progress as well as what needs to be done to overcome the “boom and bust” cycles. The featured article is about the future HMCS Harry DeWolf, the largest ship built in Canada over the last 50 years as part of the NSS program. In that piece, Cdr Corey Gleason, Commanding Officer of the first of six Arctic and Offshore Patrol Vessels to be built as part of NSS, talks about the capabilities, expected missions, operation in the North, benefits to Canadians, eco-tourism, and feedback from international partners.

Jeffrey F. Collins, an experienced policy advisor and a Fellow with the Canadian Global Affairs Institute, writes about overcoming “boom and bust” cycles by analyzing the national shipbuilding strategies of Canada and Australia. He focuses on the critical insights that can be gleaned from looking at how these procurement plans emerged, what they have achieved so far, and what challenges they have encountered.

In our Dashboard, we present milestones in the non-combat package of NSS that was awarded to Seaspan Shipyards. The infographic, starting with 2011, shows the progress made up to 2018 in NSS on Canada’s West Coast.

Katherine Thompson in the Last Word writes about cybersecurity in the naval industry and how it is imperative to have the concept of “secure by design” which must be embraced in all stages of design and deployment moving forward to address the cyber threats of the future.

Columnist Valarie Findlay writes about global politics, espionage and greed converging with technology by delving into the Khashoggi incident and the arrest of Huawei’s chief financial officer, Meng Wanzhou, for alleged violation of Iran sanctions.

The other featured article in this issue is on Canada’s world-class pilot training program. Marcello Sukhdeo, the managing editor of Vanguard, writes about how Canada is positioned to meet its shortage of pilots for the Royal Canadian Air Force by examining the NATO Flying Training in Canada (NFTC) program and the Contracted Flying Training and Support (CFTS) program. 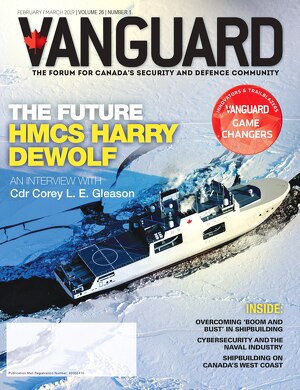