We are happy to announce that the February/March issue of Vanguard is now available. Built on the theme of shipbuilding and ISS, this edition carries features on the future HMCS Harry DeWolf, national shipbuilding plans of Canada and Australia, and lessons from In-Service Support.

Please click on the cover image below to view this issue. 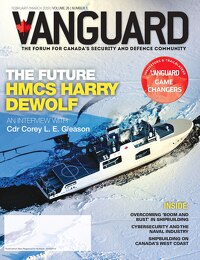