About 2,000 Canadian troops are in Europe for NATO’s largest exercise in three years

About 2,000 Canadian Armed Forces (CAF) personnel are in Northen Europe participating in Exercise Trident Juncture 2018. This exercise, running from October 25 to November 7, is the most significant one for NATO in recent years.

Troops from more than 30 NATO and partner nations totalling more than 50,000 will “train together to demonstrate that NATO forces are ready to counter any threat,” according to a press release from National Defence.

“Canada’s participation in Exercise Trident Juncture is a demonstration of our unwavering commitment to NATO and the principle of collective defence, as well as maintaining strong relationships with our Allies and partners,” said Harjit S. Sajjan, Minister of National Defence. “This large-scale NATO exercise is about ensuring NATO forces are trained and ready to respond to threats against the Alliance.”

The troops will train “in a collective defence readiness scenario” in keeping with Article 5 of the NATO Treaty. This section of the Treaty points out that if one Ally is attacked, it is deemed as an attack against all Allies.

In preparation for Exercise Trident Juncture 2018, the CAF operated a three-year joint training program, so as to become fully ready for this main joint training exercise. Running for a week from November 1 will be the live portion of the NATO exercise, in which personnel and resources from the Royal Canadian Navy, Canadian Army, Royal Canadian Air Force and NATO Allies and partner nations will participate in.

During the exercise, CAF troops will operate under the Joint Task Force Norway. This will provide CAF personnel with the opportunity “to improve national command and control of multi-national joint force operations within a NATO context.”

“Exercise Trident Juncture will demonstrate our solidarity with the NATO Alliance and provide an opportunity for our troops to further develop their skills and enhance the Canadian Armed Forces’ ability to operate jointly and with our Allies,” said Lieutenant-General Michael Rouleau, Commander, Canadian Joint Operations Command. “Our presence will be robust and will signal the importance of this exercise to our military operations abroad.” 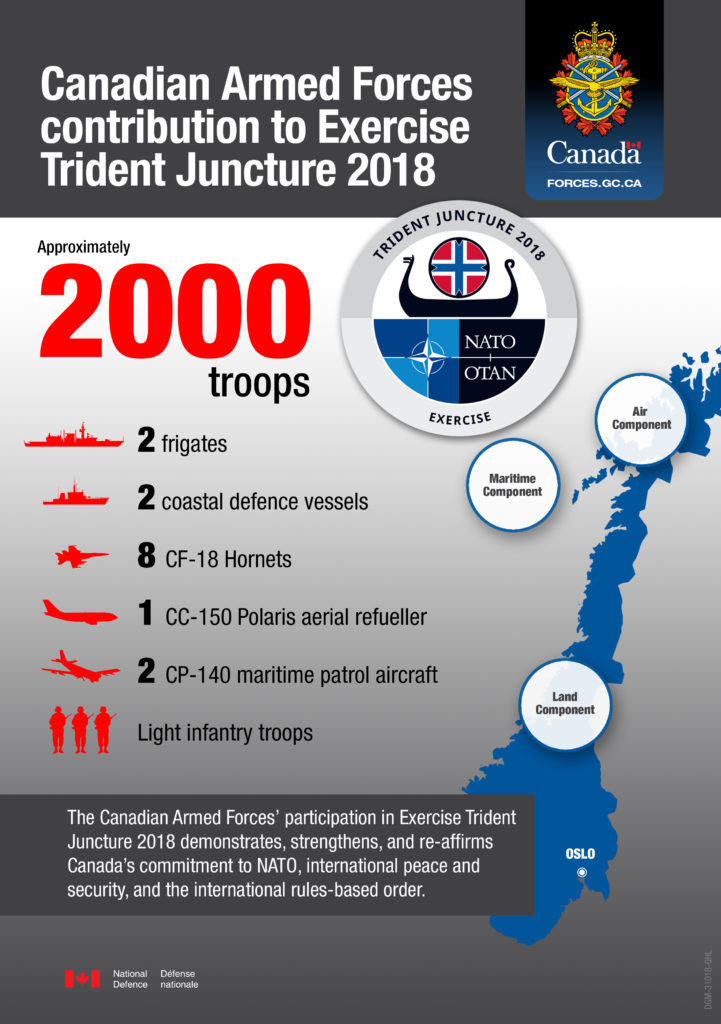 Canada to obtain 10,000 units of the illumination flares for search and rescue
Government of Canada issues a 'Call for Proposals' to enhance Defence and Security
EP 67: Changes in leadership at DND and CAF says farewell to Commander-in-Chief
Realistic peacekeeping options for Canada
HMCS Ville de Québec and CH-148 Cyclone deploy on Operation REASSURANCE
5
SHARES
ShareTweetSubscribe