A reliable gas turbine is what gives a ship its striking power, and without a working prime mover, a naval vessel is dead in the water. Therefore, a gas turbine that can be repaired in-situ and quickly returned to service is of tremendous value to a navy. GE’s LM2500 is the backbone for battleships for 33 navies worldwide, providing the most reliable form of power and an outstanding 99 per cent reliability. GE gas turbines also provide the most power dense solution for meeting high-speed missions.1, 2

There are significant lifecycle cost differences between the gas turbine options, and these variances need to be a major consideration when selecting the engines. One of the most significant design differences could result in a minor in-situ repair versus an extremely costly engine removal with a very long turnaround time in an overhaul shop.

This article explores how the in-situ repair and maintenance design philosophy for GE’s LM2500 and LM6000 marine gas turbines with a split casing has prevented hundreds of engine removals and eliminated long periods of unavailability. 3, 4 Unexpected shipboard events, including ingestion of Foreign Object Damage (FOD) that happens to all gas turbines, and preventative maintenance actions are the leading reasons that GE in-situ top case repair is used. Conversely, gas turbines without split casings require complete engine removal from the ship, increasing repair time and gas turbine unavailability to weeks or even months. In addition, the cost of repair per event increases to ~$1.5 to $3 million.

Using historical data from three naval customers, GE estimates the cost savings on an annualized basis of using a design with split casings: The United States Navy (USN) saves approximately $45 to $93 million per year; and the Royal Canadian (RCN) and Royal Australian Navies (RAN) save $4 to $9 million each per year. The number of split case repair and maintenance actions performed are 32 USN instances in 2017, and an average of three per year each for the RCN and RAN. Repairing an engine in-situ is particularly important on single gas turbine propulsion ships, which do not have redundancy. For most surface combatants, the loss of even one gas turbine would severely limit the ship in achieving mission objectives, increase the burden to the ship’s crew and significantly impact the downtime of the valuable combat asset. 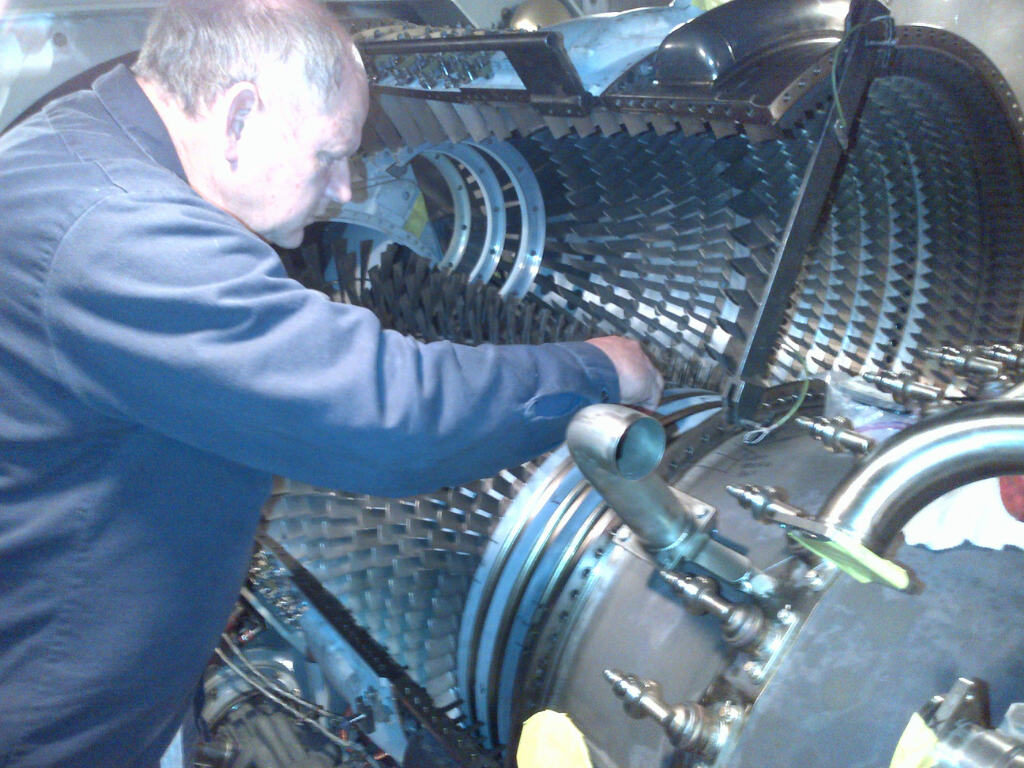 GE offers Intermediate level (I-level) repair and maintenance which can be performed on ship, dockside or at a local facility. Couple that with GE’s proven procedures, tooling and global network of expert service personnel, and the cost and time to return the gas turbine to operation is markedly less than sending the component or turbine to a depot or OEM. Note, not all repairs can be made in place; gas turbine removals may still be required due to event severity. However, by having a horizontal split casing, GE gas turbines can be opened in-situ, a thorough and immediate assessment made, and planning initiated to expedite repairs.

This article shares lessons learned that assist the acquisition, maintenance and ship operator communities in the development of design-for-maintenance requirements of a gas turbine, maintenance planning and quantification of lifecycle costs. Oftentimes, maintenance activities are only considered after the ship is at sea when a costly event occurs.

Compressor events will unexpectedly occur and they can be classified into the following categories:

FOD is the ingestion of a foreign object, salt water, sand-laden intake air or material left after the execution of maintenance tasks such as the ship’s structure or tooling. Despite ship personnel robust procedures, training and preventative best practices, ships propelled by gas turbines can be subjected to foreign object ingestion and subsequent compressor blade damage. FOD by salt water ingestion occurred on the Freedom-class Littoral Combat Ship 1 with damage to a competitor’s gas turbine. 5

In such an event, the split casing design of the GE gas turbine will immediately permit the extent of the damage to be determined and can allow the repair to be made in-situ in a matter of days (see Figure 1). Conversely, engines without split casings require the complete removal of the gas turbine to determine the extent of the damage and make repairs. Some military marine vessels also have the added complication of limited space within the inlet duct or adequate tooling to facilitate removal of the entire turbine.

It is important to immediately determine the extent of the damage visually before resuming operation. Borescope inspections are not always conclusive since damage also can be sustained on non-rotating airfoils such as vanes. FOD often impacts multiple blades and can be extensive. Minor damage can result in slight degradation of performance or a compressor that is more prone to stall. With continued operation, minor damage may propagate resulting in subsequent blade separation and significant compressor damage.

Figure 2 illustrates a compressor blade that experienced an impact/tear from a FOD event. The blade was determined to be beyond serviceable limits and required replacement. 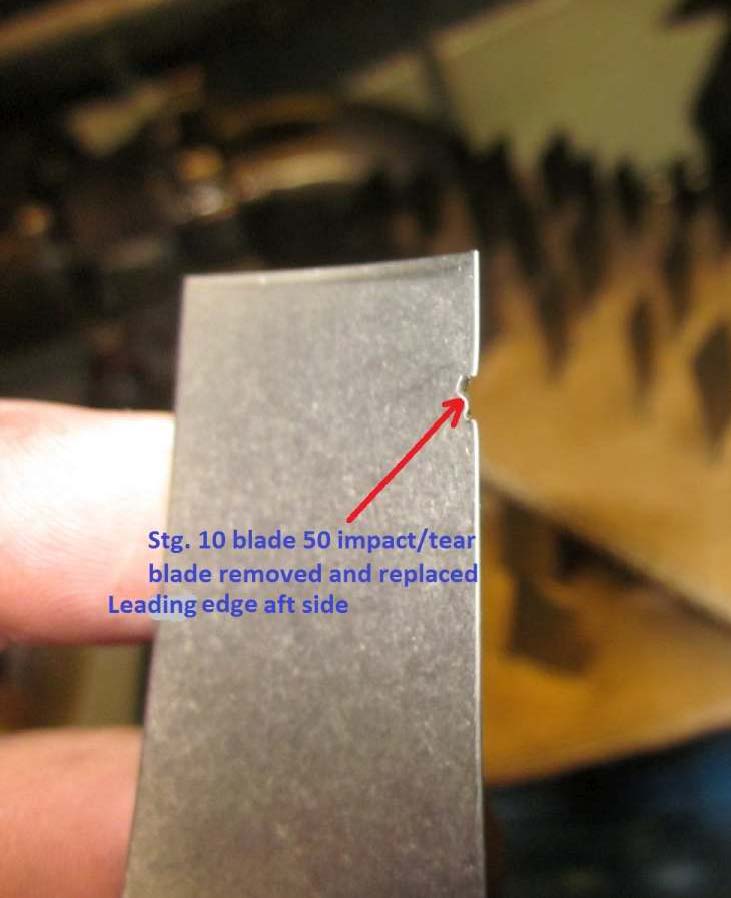 Domestic Object Damage (DOD) is a self-generated event when an internal object liberates causing impact damage to the engine. DOD also can occur from an engine stall.

A gas turbine has the potential to stall when subjected to abnormal operating conditions, or out-of-schedule Variable Stator Vanes (VSV) or bleed valves.

The LM gas turbine design employs specialized hinges and braces allowing the whole casing to be opened rather easily, similar to an automobile hood. The low-pressure turbine also has a horizontal split casing. A case can be opened to allow for internal inspection or maintenance in one working day.

At the end of 2017 during a periodic borescope inspection of an international ship, damage was found on the leading edge of a stage 10 compressor blade. The compressor casing was opened in-situ to determine the cause and the extent of the damage, and repairs were made to the turbine in a matter of days and at minimal expense.

The damage was determined to be from FOD and was greater than what was identified by the borescope inspection. That is because a borescope inspection provides a limited view of the airfoils and critical flow path hardware. By visually inspecting the compressor, it was determined that ten other compressor blades had minor damage. The 10th stage blade was replaced while the other blades were blended with honing stones.

The root cause was determined to be from loose ship “non-skid” deck surface that passed through an incomplete mounted nylon sock on the inlet screen.

Top case repair costs are typically less than $100,000. These costs vary on the low end for tasks such as trim balance with no material, to blade replacement(s) or blending in a FOD/stall repair. The work can typically be performed in two to three days.

Table 1 provides the number of top case repairs made in the USN in 2017, the RCN in the past 15 years and estimates for the RAN in the context of their respective LM2500 fleet size.

Preventative maintenance and life extension upgrades make up most of top case events (50 per cent to 86 per cent). This is followed by the need to trim balance the turbine or make FOD/stall repairs (7 per cent to 25 per cent). Variations in percentages reflect different navy experiences.

Foreign or domestic object damage inflicted on turbines is an inevitability in demanding maritime environments. This damage should not be casually discounted during turbine acquisition decisions or as part the development of a comprehensive lifecycle plan. The best way to limit repair and maintenance to thousands of dollars and just a few days downtime is by using a modular gas turbine design with split casings as employed on GE’s gas turbines. GE’s design approach also supports lifecycle strategies that embrace planned maintenance actions. Scheduled maintenance extends the engine’s service life due to changes in the ship’s propulsion plant load profile, or to incorporate technical advances made in turbine design over the years. GE also supports this design philosophy with proven tooling and a global service network.

Repairing a gas turbine in-place preserves ever-tightening maintenance budgets by protecting against the disruptive costs of unplanned engine removals. Most importantly, it substantially mitigates the operational risk of an engine casualty that reduces the ship’s mission capability or impacts availability for weeks or months. This is particularly important in countries that operate a relatively small number of surface combatants with single gas turbine propulsion systems, which do not have the inherent redundancy to maintain speed required to meet mission objectives.