Radical candour sounds rather outré as a prescription for government executives. Careful caution is often the norm. But consultant Kim Scott believes candor is critical for relationships and internal organizational communications. And if that doesn’t convince you, her new book, Radical Candor, still has some terrific ideas to improve your weekly schedule of meetings and make them effective. 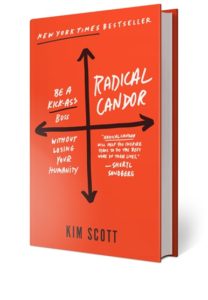 “Your relationships and your responsibilities reinforce each other positively or negatively, and this dynamic is what drives you forward as a manager – or leaves you dead in the water. Your relationships with your direct reports affect the relationships they have with their direct reports, and your team’s culture. Your ability to build trusting, human connections with the people who report directly to you will determine the quality of everything that follows,” she writes.

Those human connections require two ingredients: You must be willing to directly challenge the person you are communicating with – rather than side-step critical matters – but at the same time you must care personally about that person, trying to help them with your comments. When that both happens, you have radical candour.

Putting those two elements into a matrix, she comes up with four possible types of communications:

Nobody spends 100 percent of their time in the radical candour quadrant. We move between all four types of communications. But you want to make sure you aren’t spending excessive time in one of the lesser quadrants and move towards more time in radical candour.

To do that, she suggests explaining the idea of radical candor and asking the other person to be direct and empathetic with you. Start by getting feedback, not dishing it out. When you begin to offer feedback aim for legitimate praise initially rather than criticism. “When you move on to criticism, make sure you understand where the perilous border between radical candour and obnoxious aggression is,” she warns.

Radical candor is meant to drive results collaboratively. In that vein, she presents an unusual schema for meetings, including separating traditional management meetings between study-information, debates, and decisions – three different, shorter and more focused gatherings.

But while that’s important, she still stresses that one-on-one conversations are your “must-do meetings,” your single best opportunity to listen – really listen – to the people on your team to ensure you understand their perspectives on what’s working and what isn’t. For that to happen, consider it their meeting, not your meeting. They set the agenda. Your job is to listen and help the subordinate clarify new ideas and think issues through better. You want to be as supportive as possible. But you still need to challenge, although in a supportive manner.

A breakthrough for her as a manager was to stop viewing one-on-ones as a nuisance – calendar clutter. She realized she was eagerly scheduling lunches with people outside her organization she wanted to learn from but never considered the employees she worked with as people to learn from as well. So view colleagues as equally valuable, and occasionally shift them to meeting over a coffee or meal. She aims for 50 minutes a week per person, but that has to be contoured to the number of direct reports you have and also your listening abilities. She will limit herself to five per day.

She says it’s vital to keep a quote from Jony Ive, Apple’s famed designer, top of mind: “New ideas are fragile.” The one-on-one should be a safe place for people to nurture new ideas before they are submitted to the heat of debate.

Most people consider large staff meetings a waste of time. To improve them, she recommends holding it Monday morning and after a quick round on everyone’s weekend looking at the metrics in your organizational dashboard. A big change is to not ask for typically-dreary oral updates at the session. Those are best left to email, everyone listing three to five things they did last week. But schedule a 15-minute “study hall” in the meeting so those messages are actually read. Questions, however, are asked outside the meeting.

Supplement those with “big debate meetings.” The big is not indicative of fierce or loud debate, but of special times when you debate the big issues before you. The meetings can lower tensions she believes, since often frustration in meetings come when half the people feel they are there to make a decision and the other half are poised for a debate. The focused meetings allow you to slow down key decisions and take the time to wrestle with disagreement on how best to proceed. And they foster a larger culture of debate that a well-functioning team needs.

You decide at your staff meeting the topic for that week’s debate session, the “owner” of the issue, and who should be participating. Advise your broader team and people on other teams who work with your folks since anyone should be able to attend. This is a meeting where it is critical to check egos at the door.

“The goal of debate is to work together to come up with the best answer. There should be no ‘winners’ or ‘losers,’” she stresses. “The sole product of the debate should be a careful summary of the facts and issues that emerged, a clearer definition of the choices going forward, and a recommendation to keep debating, to move on to a decision.”

That decision comes at a separate “big decision” meeting, which typically follow the debate session. They help to ensure you figure out when to stop debating and when to start deciding. The leader of the meeting is the “decider,” who will have been appointed in the staff meeting. The people required to attend were also identified at that session, although others can join in. The decision will be final, although if you have veto power you should let the decider know in advance and the tentative decision should come to you before being distributed more widely.

It’s a bit different but like the notion of radical candour she believes it can help organizations to be more effective.  The book offer details in a clear, logical manner on implementing her ideas. It’s intended for companies but still adaptable, perhaps cautiously, to public sector circumstances.

Bookcase: Leading the Unleadable
Bookcase: When
Bookcase: The Next Level
0
SHARES
ShareTweetSubscribe