Modernized mobile bridge systems – a necessity for every army

For an army to protect its citizens in warfare or deliver emergency services, it must possess the necessary equipment. That is not a groundbreaking statement, but one that is vital for survival. From conveying of military vehicles from one point to another or providing disaster relief, an army needs proper tools to carry out such tasks.

Consider this scenario. Let’s say a nation deployed some ground troops in a foreign land to fight insurgency or terrorism. During the battle, one of the major bridges that was used to convey the soldiers across a river was later bombed, utterly destroying the means of getting back to safe ground. Waiting for helicopters for pickup would take some time and put the lives of the troops in grave danger. What can alleviate this problem?

Another scenario. If there was a major earthquake that has caused some significant damage to highways and roads in a densely populated area, the army and emergency services of that country will be called upon to provide rescue and relief efforts to those affected. Helicopters, ambulances and other land vehicles will be summoned to aid in the rescue. Let’s say there is a crack across a highway that has left a broad gap. Those trapped on the other side will need to be evacuated by air services or have to seek another route. If that type of service or option is not available, how can a country maintain the momentum in a military operation or get its people to their destinations and back to safety?

In both scenarios, armies that are equipped with modernized mobile bridge equipment will have the necessary tools to support the rescue missions and bring to safe ground its troops and citizens.

This is a deployable piece of equipment that acts as a bridge for crossing rivers, ditches, craters, and other natural and man-made hindrances. Mobile bridges have evolved from their earliest forms, from that of a log or tree trunk plopped across a canal or ditch to highly mechanized, heavy and rather sturdy bridges of today. These modern bridges can convey almost all types of military and land vehicles over different obstacles.

In Canada, one class of bridge used by the Canadian Army is the Medium Floating Bridge. This bridge was ordered from EWK Eisenwerke Kaiserslautern in the early 1980s, a company that was later acquired by General Dynamics Corporation.

Having an apparatus like this in its arsenal, the Canadian Army has the essential tool to provide a speedy means of transportation across water obstacles when needed. Also, this equipment can be configured into a medium raft and serve as a ferry. The bridge is made up of floating bays, which when connected, can provide a floating bridge easily customized to the desired length and configuration for many different uses.

One may think that configuring such a bridge across a wide river can be time-consuming, but that’s not necessarily so. In less than 30 minutes, a 100-meter bridge, or 15 bays, could be connected and made operational.

The bridge systems that the Canadian Army currently owns have reached the point where they need replacing. Some have become obsolete and require immediate action by renewing with updated or different systems to meet the demands of heavier modern battle tanks. The need for replacing the existing systems was highlighted in the Defence Acquisition Guide (DAG) of 2016 under the program of Bridge and Gap Crossing Modernization.

One company that is looking at tendering for this program is General Dynamics European Land Systems (GDELS) – Germany, a European based business unit under the Combat Systems group of General Dynamics Corporation.

“We’re the only company within the GD Corporation that has mobile bridging,” said Frank Schweitzer, Senior Manager, International Business & Services for Bridge Systems Overseas of GDELS-Germany GmbH. “We have been doing this since the 1950s.”

The company has provided combat support equipment for bridging to many countries around the world, with their primary customers coming from the NATO countries.

“Canada is a longtime customer since the 1980s and has used our bridging equipment since that time,” Schweitzer added. The focus now, according to Schweitzer, is on providing the latest bridge systems to meet the needs of the Canadian Army’s Bridge and Gap Crossing Modernization program.

Canada is expected to issue an updated DAG later this year, which will shed some more light on this program, precisely detailing what Canada is looking for, the timelines and cost. 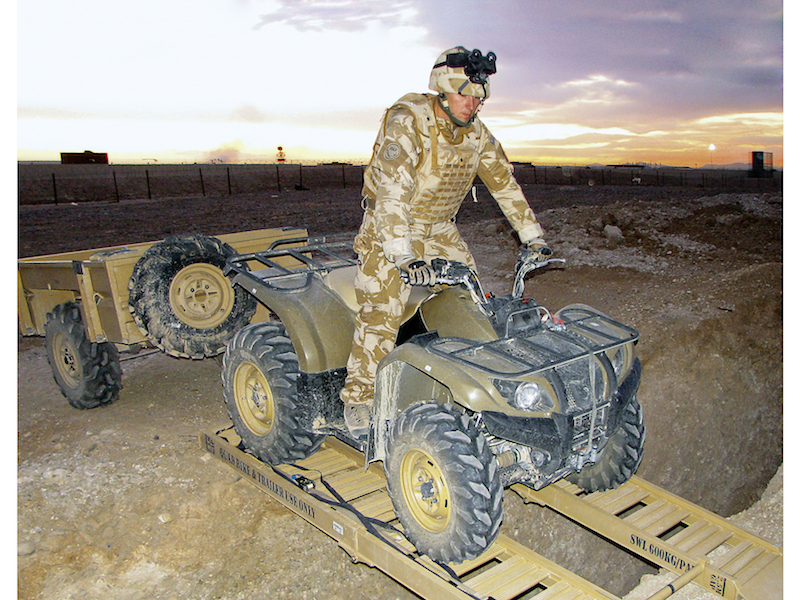 GDELS-Germany has a full range of mobile bridge systems with payloads of MLC132 and above (Military Load Classification). From its modern and fastest-to-deploy amphibious bridge and ferry system to its Quad Bike Bridge (QBB) which offers enhanced maneuverability for Quad Bikes during missions, GDELS has a product line that can meet the needs of most mobile bridge systems requirements. 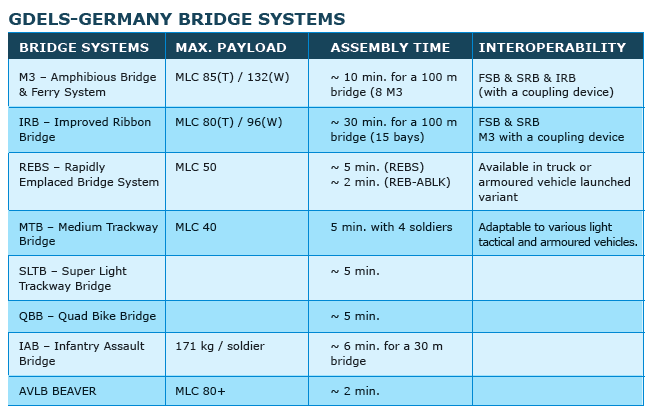 Over the years, combat vehicles like battle tanks have become bigger and heavier, consequently exceeding the crossing capability of current in-service bridges. “This development requires the design and construction of a new generation of mobile military bridges which can cope with the higher payloads,” said Schweitzer. A more massive battle tank requires a stronger and ultimately a heavier bridge, which still needs to be transported by truck, trailer, railway, ship or airplane.

Schweitzer explained that this is often a problem since it is contradictory. A higher payload but with the same or lower dimension: that is a requirement that GDELS is seeing from customers around the world. They want to increase payload while maintaining transportability.

As with every process in every industry, automation is the goal. This is another trend in mobile bridge systems. “We see a push for automation to cope with the smaller number of engineer units and the reduced size of the armed forces,” Schweitzer said. He added, however, that a higher level of automation increases the level of sophistication of a bridge, but from experience, the simpler the design, the better the system works under rough operational conditions.

One of the vital elements in designing modern bridge systems today, besides the capability of carrying higher payloads, is interoperability. “We consider it essential that future mobile bridge systems are interoperable with bridge systems of other NATO allies,” Schweitzer pointed out.

The reasoning behind this is that since the overall number of military bridging units has been reduced tremendously, following the end of the Cold War, the crossing of wider water obstacles is only possible by joining forces. Therefore, the ability to connect different bridge systems while using the same operational skills and procedures with ease and without glitches has made this a driving force behind modern mobile bridge systems.

This was evident at NATO’s Exercise ANAKONDA, held in 2016, when a 250-meter Improved Ribbon Bridge (IRB) from GDELS, was constructed by U.S., German and Dutch bridging engineers. A Standard Ribbon Bridge from a Dutch engineer company was affixed to the IRB to stretch for a total of 350 meters. The length of the bridge and the time taken in building it were commendable, but the underlying factors that made it such a success were interoperability along with the similar operational skills and bridge building procedures for both bridge systems. The IRB can function as a full-span floating bridge and a multi-bay ferry for vehicles and equipment to cross a body of water. 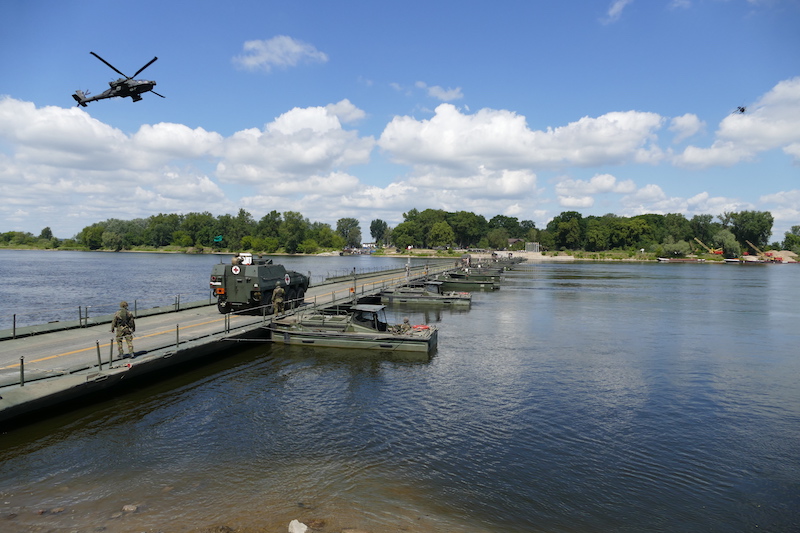 With over six decades of designing and building mobile military bridges, and serving over 20 armed forces all over the world, GDELS-Germany is poised with a viable solution as a strong contender for the Canadian Army’s Bridge and Gap Crossing Modernization program.

“We are familiar with the respective NATO requirements for military bridges and with the user countries’ procurement regulations and system support procedures,” said Schweitzer. “We have a customer service division in place that supports and sustains worldwide operations, including field service support in theatre.”

This article first appeared in the April/May 2018 issue of Vanguard.