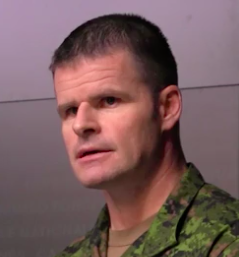 The Change of Command ceremony was officiated by General Jonathan Vance, Chief of the Defence Staff, at the Cartier Square Drill Hall in front of Canadian Armed Forces (CAF) members and distinguished guests.

“In selecting and promoting LGen Rouleau to Command CJOC, I wish Canadians to know that a truly capable General Officer is at the helm of CAF Operations,” said Gen Vance.

LGen Bowes, whose three-year tenure as Commander of CJOC ended at the ceremony, said that commanding CAF personnel on operations around the world was immensely rewarding for him. “I am continually amazed and proud of the professionalism and dedication our men and women display on a daily basis. They are the reason the Canadian Armed Forces are so highly regarded amongst our Allies,” he said.

LGen Bowes will be moving on to his next post at Veterans Affairs Canada in Charlottetown starting July 2018.

LGen Rouleau started his military career as an artillery officer in 1985 and has since served in many different positions in the Canadian Army, Special Forces and at strategic Staff portfolios at the defence headquarters.

“I am grateful for the confidence General Vance has placed in me, and for the privilege it is to command, to lead Canada’s Joint Operations moving forward,” said LGen Rouleau.

EP 67: Changes in leadership at DND and CAF says farewell to Commander-in-Chief
A Bi-National Brigade for the Canadian Forces?
RCAF gets its first woman deputy commander
Elbit Systems to supply Canada SAT-on-the-Move systems
C4ISR: A look at beyond sensors
0
SHARES
ShareTweetSubscribe