Government is replete with silos. Like the weather, everyone complains about them but nobody does much to change it. And if they try, they often find the silos sturdier than expected.

That’s why Gillian Tett’s The Silo Effect is an interesting book for government executives. Primarily about business, it still includes government, which is rare in leadership epistles. And even more intriguing is that the two prime examples she focuses on for government are positive stories of silo busting. 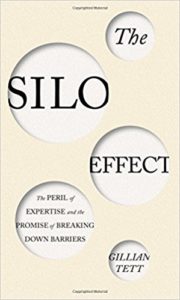 Tett is an acclaimed British financial journalist who covered the financial crisis and wrote a fascinating account in her 2009 book Fool’s Gold. That book took readers behind the scenes at J.P. Morgan, where a talented derivatives team came up with a clever moneymaking idea that was later perverted into the financial folly we suffered from. As Tett investigated the crisis, she “saw a world where the different teams of financial traders at the big banks did not know what each other was doing, even inside the same (supposedly integrated) institution. I heard how government officials were hamstrung by the fact that the big regulatory agencies and central banks were crazily fragmented, not just in terms of their bureaucratic structures, but also their worldview. Politicians were no better. Nor were credit rating agencies, or parts of the media.”

So Tett set out to understand silos, and to look at how to overcome them. She stresses that silos serve a purpose. We need to bring together specialists — in government, academe, and business — to benefit from their expertise, as they work together. “We cannot entirely abolish silos, any more than we could abolish electricity and maintain our modern lifestyles,” she observes. But when silos become excessively rigid, entrenched, we can encounter unexpected risks and lose out on opportunities.

Her introduction begins with a tragic 2011 fire in New York that claimed three lives and led Mayor Michael Bloomberg to ask his staff what could be done to prevent similar events in future. At first glance, it seemed not much. With only 20 inspectors, the Department of Buildings couldn’t handle the 20,000 complaints about dangerous housing it received in a city with one million buildings.

But a member of his team, Mike Flowers, wondered what could be done by taking advantage of the information held by the city’s three dozen agencies and 150,000 employees. She notes that communication between these agencies was patchy at best, to the point on Sept. 11, 2011, after the collapse of the World Trade Centre, the radios and walkie-talkies used by the fire, police and health departments could not tune into the same communication channels. “Nobody had discovered this before, precisely because these different teams were so disconnected,” she writes.

Flowers, who had brought together a team of data crunchers, started to comb through what the city knew about fire risk. Interestingly, most complaints about illegal conversions emanated from lower Manhattan, which was not where most fires — or illegal conversions — actually occurred. Those happened in the outer boroughs, such as the Bronx and Queen’s, but the poor immigrant families there (like the one burned to death in the most recent fire) were too scared of authorities to complain.

So Flowers and his team began to look at data outside the obvious departments in many different databases to see what could be learned about fire traps. They found four risk factors that, when combined, suggested a dramatically higher incidence of house fires: Mortgage defaults, violation of building codes, data on the age of structures, and indicators of neighbourhood poverty. Breaking through silos to use that disparate data quadrupled the chances of inspectors turning up a problem.

In Chicago’s Police Department, Brett Goldstein, a former Internet wunderkind who turned to law enforcement, set out to reduce the city’s murder rate by studying gang movement through data in various departments. Then, like a weatherman, he issued forecasts that went out to everyone who could play a role, rather than being restricted by bureaucratic splits in the force. The murder rate tumbled to its lowest rate since the 1960s.

Recruited after that to City Hall by new mayor Rahm Emmanuel, he held a Hackathon — an all-night brainstorming session — in which somebody came up with an interactive map to help the public find their car if it was towed away by the traffic police.

Those are both examples of using data to bust silos, and while they may seem like limited triumphs, the reality is that information is crucial to government — and databases are not talking to each other. Breaking the barriers can provide results. But the book’s many other non-government stories also offer ideas to transcend tribalism and tunnel vision in organizations.

Facebook, wary of becoming as siloed as Microsoft, has introduced various countervailing policies. The company brings new recruits together for a six-week induction course known as “Bootcamp,” which exposes them to various sides of the organization. They aren’t allowed to choose which team to join until the end of that stint. Tech companies love holding Hackathons to solve problems, but a special feature at Facebook is mingling people from different parts of the company in those challenges. And after someone has been working on the same issue for a year to 18 months, Facebook will rotate them out for a few months to get a broader experience; most people choosing something far different from their current work.

The company’s top two executives work in an open-plan space, visible to all. CEO Mark Zuckerberg has an additional private office, but it is lined with glass and next to a walkway where employees constantly stroll. They call it “Mark’s goldfish bowl.” Walkways have been built to encourage the company’s engineers to ramble about, bumping into each other, and perhaps through these encounters break silos. And, of course, they are encouraged to use Facebook to connect with fellow employees.

Tett says that a first step in silo busting is, like Facebook, to keep the boundaries of teams flexible and fluid. Rotating people between different departments and creating places for social collisions — in the real or virtual world — is a good idea. “People need to be mixed together to stop them becoming inward-looking and defensive,” she says.

Organizations also need to think about pay and incentives so that people gain by collaborating. A third lesson she draws from her reporting is that huge risks happen when departments hug information to themselves. “However, it should be stressed that you cannot combat silos simply by opening the data spigot and letting information spill out. What is equally important is to create a culture that enables everyone to interpret information, and let different interpretations be heard. This is not easy to do when there are teams of experts who use complex technical information that only they understand, or when they refuse to listen to alternative ideas,” she says.

This touches on her starting point, the financial crisis, where she looked at Britain’s financial cadre and saw how “skilled experts can become so confident in their own ideas that they end up missing dangers hidden in plain sight.” Their mental maps, in academe or in policymaking at central banks and government ministries, kept them securely ignorant of growing risks outside those mental silos.

During the first two centuries of the Bank of England’s existence, money, society and politics were entwined. New recruits were expected to be flexible and gain a holistic view of how money moved around the economy. But economics over time became preoccupied with mathematical models and became distanced from financial experts looking at markets. The different silos contributed to the inability to piece together what was happening in the shadowy banking world.

A former Bank of England official told her that cultural translators are needed to move between specialist silos and explain to those sitting inside one department what is happening elsewhere. Not everyone must be a cultural translator but perhaps 10 per cent of the staff must play that role. With that, we all need to periodically reimagine the taxonomies we use to organize the world, and move beyond the commonly accepted classification of our silo.

Overcoming silos, she warns, is not a task we ever complete. It is always a work in progress. So get started. Her book is not a guidebook, simply an interesting collection of stories assembled by a skilled journalist of how some organizations are dealing with silos to help you ponder the difficulties and possibilities.