PwC Report: Lockheed Martin contributed $3.8B in GDP to Canada in the last decade

A new study conducted by Pricewaterhouse-Coopers (PwC) LLP, spanning ten years from 2008 to 2017, found that Lockheed Martin created billions of dollars in economic impact to Canada.

The report, Lockheed Martin Study of Economic Impact in Canada, reveals that “Lockheed Martin Canada’s operating activities, as well as purchases made by Lockheed Martin Corporation, have generated and facilitated substantial economic activity in Canada.” This resulted in sustaining over 30,000 jobs, two billion dollars in export sales of innovation and technology developed in Canada, and aiding in the growth of many small and medium-sized businesses (SMBs).

Charles Bouchard, chief executive of Lockheed Martin Canada, said that these findings “validate” their objective of “serving as an innovative and trusted defence and aerospace partner in Canada and employing thousands of direct and indirect Canadians in highly skilled jobs.”

Today, Lockheed Martin Canada employs about 1,000 workers with its primary focus on naval Combat Systems Integration and training at five major sites in Victoria, Calgary, Ottawa, Montreal, and Halifax. The company has a robust Canadian supply chain of 1,400 companies in different sectors across Canada. It’s employees and suppliers are among the highest paid as compared to workers in similar industries. According to the report, the average annual income of all employees supported by Lockheed Martin in 2017 was $77K, while a direct employee of Lockheed Martin Canada earned on average $90K last year. 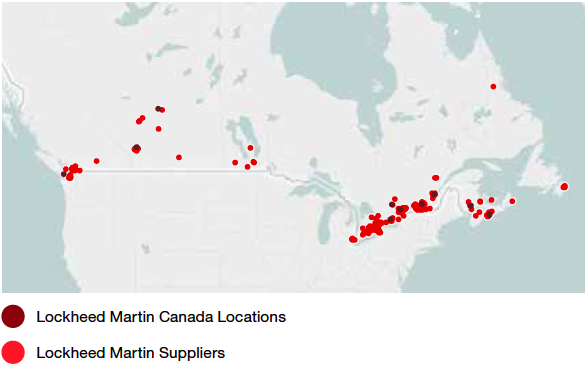 “The real success in Canada is being at the point where we are now exporting Canadian-made technology and services to customers around the world,” said Bouchard. A significant portion of the $2 billion in exports is for US customers. But that is changing with the company being selected to install modernized combat management systems based on it’s Canadian CMS 330 design for navies in New Zealand and Chile.

The company also contributes to R&D in Canada by investing in three main ways.

1. Investing almost $19 million in developing new capabilities within Lockheed Martin Canada, including CMS 330.
2. Providing over $156 million investment in companies and universities through ITBs.
3. By the acquisition of innovative companies in Canada.

Lockheed Martin Canada contributes additionally by strengthening the quality of life of the communities in which its employees live and work. In the last ten years, more than $1 million was given in philanthropic contributions to support youth STEM education and military members, veterans and their families.

For the full report, go here.