We learned in grade school that one plus one equals two. But when we are faced with two choices in decision-making – and usually decisions end up framed around two possibilities — our approach might be described as one versus one equals one. We discard the lesser choice and move on with the better one.

That defies some of the most interesting things we know about innovation, how often the best solutions – the best decisions – come from unique combinations. In The Medici Effect, which we looked at previously, consultant Frans Johansson discussed Peter’s Café in The Azores, a resting place for sailors between the continents. The café is filled with ideas and viewpoints from all corners of the world, and as people chat those ideas intermingle and collide with each other. “There is another place just like Peter’s Café, but it is not in the Azores. It is in our minds. It is a place where different cultures, domains, and disciplines stream together towards a single point. They connect, allowing for established concepts to clash and combine, ultimately forming a multitude of new, ground-breaking ideas,” he wrote.

He called that The Intersection. Roger Martin, then dean of Rotman School of Management, wrote in 2007 of The Opposable Mind, again featured in this column, drawn from the fact humans have opposable thumbs that allow us to accomplish things that no other creature can manage, from writing to threading a needle. “Similarly, we were born with an opposable mind we can use to hold two conflicting ideas in constructive tension. We can use that tension to think our way through to a new and superior idea,” he says. 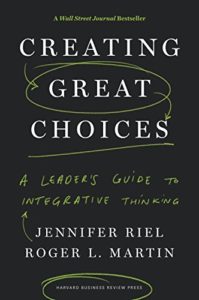 By Jennifer Riel and Roger Martin

He outlined how some successful businesspeople had used that creative tension to propel a new business ahead. You see an example he cited when you stay at a Four Seasons Hotel. Founder Isadore Sharp refused to accept that only two types of lodging could be built: Small motels with intimacy and comfort, or large hotels with excellent location and amenities. Instead, he decided to create hotels with the intimacy of his original small motor hotel and the amenities of a large convention hotel.

The business school Martin headed for many years has taught this approach, dubbed integrative thinking, and now a decade later he combines with protégé Jennifer Riel in a new book that shows how to make it work.

They point out typically when making decisions an organization typically charters a team to analyze the issues, potential choices are identified and narrowed, the options are vetted through arguments and voting, supporting arguments are then refined for the favoured possibilities, organizational buy-in is sought, compromises are made, and the final recommendation is delivered. The belief throughout is that there is only one right answer. Sometimes, after all the arguments, all options are wounded and what Martin calls “the least worst option” is selected. You may be familiar with that.

“To produce better options we need a better process. We need a way of thinking through and creating choices that mitigate, rather than amplifies, the effects of our deeply held mental models and biases. One key step in doing that is to explicitly consider opposing solutions, exploring deeply divergent possibilities for solving the problem,” they write in Making Great Choices.

Their four-step process begins with defining the problem you face and articulating two opposing models to deal with it. The two options should be extreme and opposing answers to the problem, turning it from a general problem into a two-sided dilemma. By focusing on extreme options as a starting point, you naturally open up discussion of a large number of other alternatives between them. Exploiting the tensions between the two options will also generate new possibilities you hadn’t considered.

Indeed, they suggest you might test this approach with some of opposing models common to organizations: Short-term choices vs. long-term choices, centralization vs. decentralization, customization vs. standardization, specialist vs. generalist, agility vs. stability, and broad vs. deep. For which trade-off do you most wish there was a better answer? Consider how its tensions play out in your department.

Try to define how the models you are considering work. Instead of a pro-con list, try to develop a pro-pro list, detailing the positives of each model. Indeed, ban any negative comments. Try to fall in love with each. Sketch the two models, describing them in sufficient detail that an outsider could understand them quickly, through words or drawings.

Stage two involves examining the models in even greater detail. Consider how the options are similar and different. How might the different benefits be viewed by people who will the recipients of whatever you decide? What are the implications of the differences for the path ahead? Then consider what you most value from the models.

Also, what drives the tension between the models? If the choice is between centralization and decentralization, you might focus on the consistency provided by centralization and the ability to specifically address local needs with the other path. It’s hard to have both and so you need to take this tension into account as you consider a way ahead.

You can also explore the assumptions underlying each model. An assumption behind a decentralized model might be that employees in each region are more similar to one another than to their peers in other regions. An assumption of centralization might be that organizational needs are best understood at a global level. “What if these assumptions didn’t hold? How might you think about the problem then?” they ask.

In stage three, you explore the possibilities. This can be a difficult task and to help they share three guiding questions:

Through these questions, you should come up with a new blend. Now, in the final stage of the process, you want to test it by applying the techniques featured in design thinking. Figure out how to create prototypes and test how those work, learning more about the advantages and limits of your approach. “Testing and experimentation of this kind require you to take on a different mindset than you have so far used in the integrative thinking process. When you were articulating models and generating new ideas, you were looking at the positives and imagining what might be possible. The testing mindset is different; it is a shift from thinking to doing, with an eye toward getting new data about the world,” they write.

Obviously, there will be hitches and as with many decision-making processes, you may have to retrace your steps and re-explore. But it promises the chance to make one plus one equal more than you could have imagined.