I recently attended the Maritime and Arctic Security & Safety Conference in St. John’s, Newfoundland, Canada, where I learned of an interesting unforeseen opportunity for the Canadian Government to acquire a number of modern icebreakers at deeply discounted prices.

On January 30, 2017, I raised my concerns with the aging of the Canadian Coast Guard fleet of icebreakers. The ships in that fleet are coming to the end of their technical designs. The average age of the fleet is 36 years. The CCGS Louis St-Laurent is 48 years old.

Although there can be life-extending programs in place there is still a need to replace those ships with modern ones. There is only one vessel that I can clearly identify in the Ship Building Strategy. At the moment, the replacement for the Louis-St-Laurent is planned to enter service in 2028 at which point the Louis St-Laurent will be 59 years old.

Building a new fleet will provide an opportunity to introduce more environmentally friendly propulsion systems to reduce the pollution of black carbon and nitrous oxide in the Arctic since the momentum to ban heavy fuel oil from the Arctic is increasing.

Two related elements are creating stress on the Canadian icebreaker fleet: global warming and demand for services. I believe that most Canadians are by now aware that global warming is taking place and that the Arctic ice is disappearing. What might not be realized is that the breaking up of the ice means that the winds and currents will move the ice, especially thick and hard multi-year ice, in unexpected places and at unexpected times. One day the ice may be gone from the shore of a community but the next day it may block the departure of the supply ship requiring the support of an icebreaker. The opposite may happen with a supply ship not being able to reach the community because the wind will have pushed a barrier of ice against the coastline. All of the communities of Nunavut are resupplied by ship; it is, therefore, essential that icebreaker services be readily available.

The other element of stress is that the level of human activity in the Arctic is on the increase, allowed by the easier access caused by the disappearance of the ice. There is more activity requiring icebreaker support. A cruise ship in distress may divert the support of an icebreaker from community resupply. This will more than likely continue to increase which will in turn likely call for more icebreaker support.

When I commanded Joint Task Force North, my Coast Guard colleagues used to tell me that “if there is more ice you need more icebreakers, and if there is less ice you still need more icebreakers.” Although counter-intuitive, the need for more icebreaker when there is less ice is because the Arctic ice starts moving around early and throughout the shipping season causing largely unpredictable ice dams. This is already reported by the Coast Guard and the marine companies resupplying the Canadian Arctic communities.

The oil and gas company Shell is reported to have spent in excess of $9 billion dollars exploring and developing a capability to drill for oil in the Arctic. For several reasons forming a “perfect storm,” in September of 2015, they cancelled their Arctic project. To support their Arctic operations they had secured a number of icebreakers that are now surplus.

The m/v Aiviq is a Polar Class 3 icebreaker built by North American Shipbuilders in 2012. It is reported to be the world’s most powerful icebreaker privately owned. In addition, m/v Tor Viking II, m/v Vidar Viking and m/v Balder Viking are three Norwegian built Polar Class 4 icebreakers that were destined to support Shell’s Arctic operations. All these vessels are now available to be secured by Canada and more specifically the Canadian Coast Guard.

Given the state of the Canadian icebreaker fleet and the increasing demand for icebreaker support in both the Arctic and in support of the Saint-Lawrence Seaway, Canada might be wise to consider the offer of those icebreakers.

The ships will likely need some modifications to meet the Coast Guard requirements, but those should be relatively easy to complete in a short period of time compared to building a ship from the ground up. The U.S. has also identified a need for icebreakers to replace and augment the two that are in operation today. They may also be interested in acquiring the ones that were once destined to support the Shell Arctic operations that have been cancelled.

Colonel (Retired) Pierre Leblanc is a former Commander of the Canadian Forces in the Canadian Arctic. www.arcticsecurity.ca

This article was first published on The Maritime Executive website on January 2, 2018, and was reprinted here with the permission from the publisher. It appeared in the Feb/Mar 2018 issue of Vanguard. 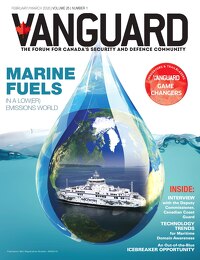 The opinions expressed herein are the author’s and not necessarily those of Vanguard.