Interview with Allan Weldon, DND on the cost estimate for CSC

As a former Naval Reserve, Allan Weldon joined National Defence in 1990. Since that time, he has served in a series of positions of increasing responsibility within the Finance Branch, as well as spending time within both the Canadian Army and the Information Management Branch. In 2011, because of the Chief Financial Officer realignment initiative, he became Director Costing Services. 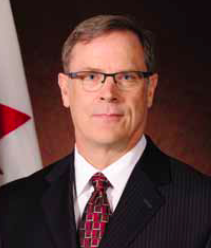 He has since grown and transformed the costing function in National Defence and is now the Executive Director of the newly established Center for Costing in Defence responsible for both producing Life Cycle Cost Estimates for major procurement projects as well as for implementing leading and best practices in costing in Defence.

Q: As the Executive Director for Centre for Costing in Defence at the Department of National Defence, can you share with us your main responsibilities?

My organization is split into two parts. I have a group that produces cost estimates, and I have another group that we call cost analytics; they provide the background information, do research into techniques on costing, look at costing software among other things. That’s the way we are organized within the Centre. The main responsibility is producing cost estimates for all acquisition projects over $5 million.

Q: So, you’re responsible for doing costing for each acquisition program above $5 million?

Yes, essentially all equipment acquisition projects and also other things like the Defence Policy Review (DPR). We provided cost estimates for the initiatives for the DPR, and we are also involved in other areas that need costing from an organizational context.

What I am not responsible for is costing for military operations and activities inside a Level 1 – that is the army, navy, air force. Anything they are doing within their own area of responsibility, I don’t get involved in unless it’s something that has to go to the deputy minister or to the minister for approval; then I am responsible to cost it.

Q: How many members do you have on your staff? Do you have the resources to handle all the costing requirements for DND, or do you outsource as well?

We do a little bit of outsourcing since we are currently in a growth period. About two years ago, it was identified that we didn’t have enough staff resources, so we have made an investment in additional staff resources and are now just at the point of completing the recruiting and training of new staff. So currently we are now becoming fully staffed and should have enough resources to fulfill our mandate with a staff of about 89 members, with the use of some contracted support from time to time.

Q: For those costing jobs that are being outsourced, how is it done?

We have done it primarily through individual call-ups against standing offers. There are some contracting vehicles available to us under professional services where we can just do a statement of work and then do a call-up of a resource.

Q: What are the main challenges to costing?

The basic challenge around costing is dealing with uncertainty. It’s not like buying a new truck at the local car dealership when you know exactly what you are buying. We get involved quite early on in projects when the requirements are not fully set. Because of that, it is difficult to produce cost estimates when there is so much uncertainty. So, managing that uncertainty is what I would consider the biggest challenge with costing.

To tie that into the surface combatant discussion, for example, Defence has not yet picked a design. Trying to cost the program is tough when at a granular level, you don’t know exactly what you’re buying. There are a bunch of designs out there, so we have to look at all of them and try to do our work based on examining each. That makes it difficult. That is why you end up getting some pretty broad cost ranges because you just don’t know what you are going to end up with until the competitive process delivers the final design. At that point in time, we will be able to get more specific.

Q: Talking about Canadian Surface Combatant, what are your findings on the costing for this program? When you did your costing, did you look at future years as well? What is it going to cost in say five years?

The number that was announced as part of the DPR is a range of $56 to $60 billion in what we call budget-year dollars or inflated dollars. That is the value of the cheques that the Government will have to write to purchase the asset for the full project, but it does not include any maintenance, sustainment or lifecycle support costs.

When we do a costing, part of the process is creating something called a point estimate. A point estimate includes a set of assumptions associated with a project, like a delivery schedule. Then after that, we do a risk and sensitivity assessment. As part of this assessment, we will, as an example, simulate a change in the delivery schedule to see what happens to the cost estimate if it takes an extra year or two years to deliver this project.

Essentially, we cost the plan and then add to the cost estimate a risk premium that will account for all sorts of potential risks, schedule slippage, foreign currency fluctuation, general inflation in the economy, design changes, and so on.

Q: Did you do a comparison of cost in building the ships in Canada and overseas?

Q: What methods or tools were used in your costing for CSC?

We used a multitude of methods. There are four basic methods of cost estimating. You can use parametric estimate; that’s what the PBO did by using a commercial software and parameters. There is something called “analogy” which uses a comparison to a similar project. Another method is called “engineering build-up” which is basically a breakdown into component parts and the cost for each part is determined. The final method is expert opinion. For our cost estimate, we used a combination of all of these.

It’s important to note that we use the method that has the best information available and gives the best result. Each one of those methods has its strengths and weaknesses. Whatever information you have available determines which method you can use.

Q: For CSC, did you used all four methods?

Yes, a combination of all four. In addition, to be compliant with Treasury Board policy around cost estimating, we had an independent estimate prepared on our behalf.

Q: Can you share a little more about that? Was there a variance?

There is always going to be a variance between estimates, but the whole purpose for doing this independent cost estimate is to look at the result of an independent party doing the same thing to see if they get a similar result. In this case, the independent result was similar to both our result and that of the PBO.

Q: According to the PBO’s report, the original budget of $26.2 billion for CSC would only allow us to build six ships. What are your thoughts on that? Is that within your calculations as well?

We tried to look at that a little bit as well, and we came up with a similar result.

Q: Is there anything else you would like to add about costing for CSC?

Yes, in preparing the cost estimate for CSC, we also used third-party expert input and review. For example, if the contractor told us it is going to take so many labour hours to do a piece of work, we ask the third party to validate that estimate. So, it’s not like we are just going along with what the contractor says. It is about seeking input from experts from around the world in shipbuilding to confirm that the contractor’s estimate of level of effort is, in fact, a reasonable estimate.

Also, we should be looking at updating the cost on a cyclical basis because this is a very large and complex program. This will be the largest purchase the government of Canada has ever made in terms of military equipment. In the future, we don’t want to be in the same situation as we were in 2008 when we never formally relooked at that number for almost a decade.

Q: How often should costing be relooked at?

By policy, every time we go back to the government for an approval, we update the costing. So, it depends on how the project is moving along the approval process for when we redo the costing. There is no fixed schedule – like once a year or once every 18 months. A relook at the costing also depends on when new information is available.

Q: Thanks for sharing your insight into costing for CSC.