Canada is planning to build 15 Surface Combatants starting in the early 2020s, to replace the aging fleet of the Iroquois and Halifax-class warships. As companies are putting the final touches on their bids for the Canadian Surface Combatant (CSC) program, we have decided to focus a significant portion of this issue on the costing for this long awaited project, which is considered the largest and most complex shipbuilding program in Canada since World War II.

The current budget of $26.2 billion to construct up to 15 ships was set way back in 2008. But due to the high increases in cost, the original budget is not enough to cover the cost of the number of ships that was initially planned. Since then, studies have revealed that it would cost currently up to $40 billion, and that figure will swell to over $60 billion by the early 2020s, when construction is expected to be underway.

The Office of the Parliamentary Budget Officer (PBO) issued a report recently that provides a cost estimate of the CSC program. Rod Story, Financial Advisor – Analyst at the PBO, headed this project. In this issue, we are excited to provide the full interview that we conducted with Story on the costing methodologies used, what would it cost to build the ships, the cost of delays, challenges for Canada, and factors that are driving the cost. The bottom line of this report is that it will be cheaper to build the ships at a foreign shipyard that would build the original ship design, rather than building them in Canada.

We are also thrilled to share with you another perspective on costing for CSC in the form of an interview with Allan Weldon, the Executive Director of the Centre for Costing in Defence at the Department of National Defence. Weldon spoke about their cost estimate for CSC, challenges, the importance of costing for projects, and how periodic costing is needed to remain realistic.

The cost versus benefit to Canadians of the National Shipbuilding Strategy is another interesting report that was done by PricewaterhouseCoopers (PwC) on CSC. We have in this issue a summarized version of it that reveals it is more favourable to build the ships in Canada than overseas.

To round off our focus on the Surface Combatants, we’ve also put together an infographic on the timeline of the National Shipbuilding Strategy (NSS) from the combat package angle. Here you will find an overview of the events that have occurred since Irving Shipyard Inc. was awarded the contract to build the fleet of combat vessels for Canada.

With Canada’s new Defence Policy being made public a few weeks ago, David Perry, Senior Analyst and a Fellow with the Canadian Global Affairs Institute, gives us his take on the direction that Canada is headed with this new policy. He writes, “the policy provides a surprisingly clear-eyed outline of the desired objectives for the Canadian Armed Forces and real additional resources to achieve them.” Ian Parker, a former CFN consultant, on the other hand, sees the policy as “a set of multiple institutional wish lists rather than a strategic defence policy for Canada.” 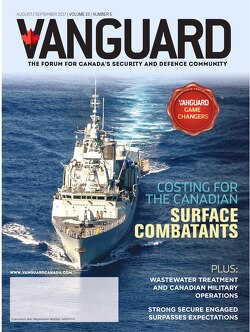 As usual, we are delighted to announce our Game Changers: Marc Bouvrette, President of Gap Wireless; Alex McPhail, President & CEO of EXA Consulting Limited; and Garry Warren VP – Industrial Development, Construction & Equipment Division of J.D. Irving Ltd. Gap Wireless is changing the game in the industry through Bouvrette’s leadership. They’ve recently opened new warehouses in the U.S. and Calgary to bring products like UAV, sensors, and software to their clients. McPhail is a highly effective consultant for complex and major proposals. He has contributed to many successful proposals for major companies within the defence industry. Warren has spent most his time during the last year dedicated to the new Marine Additive Manufacturing Centre of Excellence (MAMCE), that was recently launched, changing the game in fabrication equipment and methods.

We hope you enjoy this issue.