The summer is finally here and the buzz in the air is all about Canada’s new defence policy. As we were putting the final touches on this issue of Vanguard, the long-awaited defence policy was finally announced.

This new defence policy released by the Liberal government outlines new capabilities and spending for the Canadian Armed Forces with an increase in annual defence budget from $18.9 billion currently to $32.7 billion by 2026/27.

This notable increase in spending has been greeted by a mixture of optimism and skepticism. Many are applauding this decision by the current government to boost spending for the military, while others are just weary of it and see it as following in the same vein of the Martin and Harper governments.

Nevertheless, what we have today is a clear indication of where the government is planning to invest in over the next few years, which has rekindled some hope for the defence industry in Canada.

In this issue, we are excited to share with you an interview with the Commissioner of the Canadian Coast Guard, Jeffery Hutchinson. Learn about his focus and vision for the CCG and his most pressing needs as they relate to procurement. To complement this interview, we have a piece from Transport Canada on the Oceans Protection Plan which was announced last November.

As the Canadian Armed Forces continue to modernize and adapt to an ever-changing world, joint targeting is becoming a more relevant topic of discussion. Daniel Landry, Joint Targeting Programme Manager at DND in his piece shows how data science and machine learning will add modern non-munitions options for joint targeting in the Canadian Armed Forces.

We are excited to announce Vanguard’s Game Changers for this issue: Barney Bangs, President of Tulmar Safety Systems Inc.; Mohsen Mohammadi, Assistant Professor and Director for the Marine Additive Manufacturing Centre of Excellence, University of New Brunswick; and Colin Stephenson, Executive Director, DEFSEC Atlantic. These three men have made significant contributions in changing the game within the industry through their innovative and strategic leadership roles. Be sure to read each interview and check out the full interview as well on our website.

I hope you enjoy the issue and have a fantastic summer.

Click on the image below to view this issue. 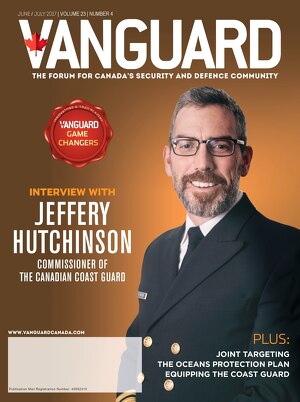