CSC: Cost versus benefits to Canadians

A recent report published by PricewaterhouseCoopers LLP (PwC) measures the value that Canadians would derive from building 15 Surface Combatant ships in Canada as compared to acquiring them from overseas.

The report, Value for Canada: The cost versus benefit to Canadians of the National Shipbuilding Strategy examines the benefits to Canada on an economic and fiscal level and its impact on the creation of jobs, the GDP and public finances. The report also focuses on the cost of building these ships locally and overseas. The overseas comparator that PwC used in its analysis was based on a blend of Western European shipbuilders from France, Germany, Netherlands, Spain and the UK or what the report termed as “Build in Europe”.

As part of the NSS program, Irving Shipbuilding Inc. was awarded the contract to build up to 15 new Canadian Surface Combatants (CSC) to replace existing ships that will bolster Canada’s defence capabilities.

“The CSC will be Canada’s largest Naval program for a generation. Its successful delivery to performance, price and program are essential to the RCN, Canadian industry and Canadian taxpayers,” said Professor P G Wrobel, University College London.

Both the Build in Canada and Build in Europe scenarios were measured by the Benefit-Cost-Ratio (BCR) which is a cost-benefit analysis that gives the best way to assess the value for money to Canada according to the report. The potential economic benefits of building the CSC fleet in Canada and the expected difference in cost to do so overseas were considered.

The report also provided details on the costs that were measured like production, ship design, integration and modification, and extra costs to build the lead ship. The report excluded costs of administering the NSS, initial on-board spares and full lifecycle costs. The wider economic benefits were considered as well like the contribution to the GDP of Canada from the shipyard, suppliers, and meeting offset obligations. Years of employment of Canadians in the shipyard, supply chain as well as tax contributions both on the federal and provincial levels were measured too.

The report estimates that the total on project economic benefit is greater for Build in Canada scenario by some CAD $1.04 billion. The tax revenue benefit to Canada is calculated to be in the range of CAD $0.63-0.66 billion per every billion spent for the Build in Canada and $0.24-0.50 billion for Build in Europe. When everything is added up the Build in Europe becomes 29-42 per cent more expensive that being built locally. 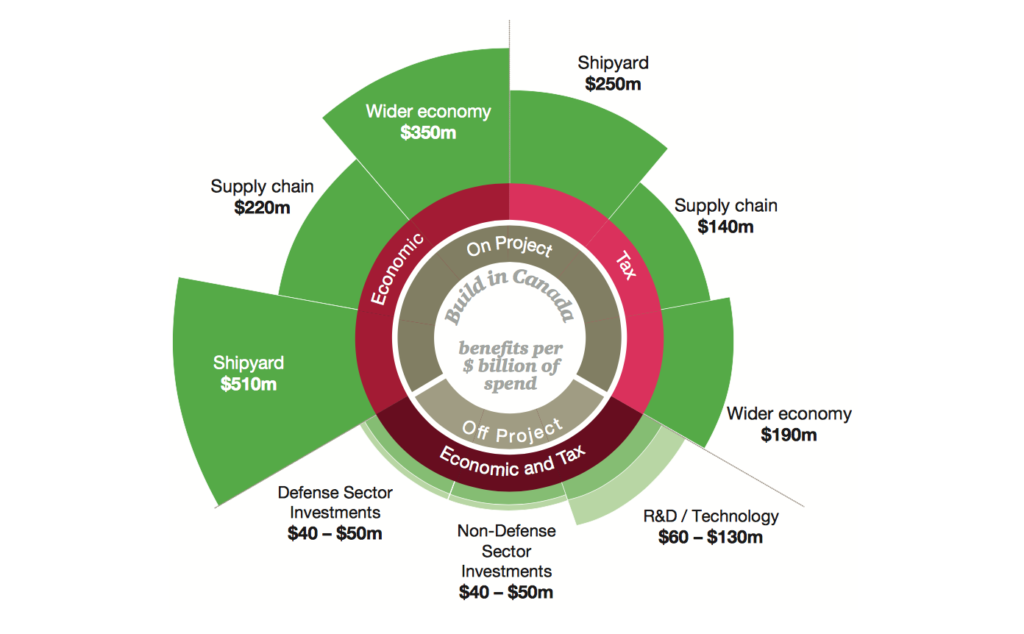 Benefits for the Canadian economy for Build in Canada scenario.

“These three factors: economic benefit, fiscal benefit and cost competitiveness make the choice evident, Pedro Antunes Deputy Chief Economist, The Conference Board of Canada said. “The federal government is investing in combat ships on behalf of Canadians, and Canadians would benefit on all fronts from having the ships built at home.”

Benefits for the Canadian economy for Build in Europe scenario.

The average annual number of jobs that will be created is estimated to be over 290 per every billion spent under the Build in Canada scenario.

“The principal conclusion that it is cheaper to build these ships in Canada should come as no surprise in view of the size and duration of this program,” Wrobel said.

To get the full report from PwC, go here.

Charting a course for the CSC
What is best value for the Canadian Surface Combatant?
EP 92: Nigel Stewart, BAE Systems talks about the significant benefits of the Type 26
DEFSEC '15: Big ideas in a small city
Irving poised to hire 7,900 workers
13
SHARES
ShareTweetSubscribe