Over 250 women and men from the defence and security industry in Canada participated in a breakfast event to honour Nursing Sister Katherine Maud Macdonald whose name was selected as the award for the 2017 Women in Defence and Security (WiDS) Memorial Scholarship.

Born in Brantford, Ontario in 1893, Katherine became the first Canadian woman to be killed in World War I. After enlisting in March 1917 for the Canadian Army Corps in London, Ontario, she departed for England two weeks later to serve her country. After a brief stint in England, she was posted to Etaples, France where she was killed on May 19, 1918, during an air raid on the 1st Canadian General Hospital at the age of 25.

Katherine was awarded the British Victory Medal and as a way to honour her selfless service to Canada, a commemorative plaque was placed in the Canadian Parliament Buildings. 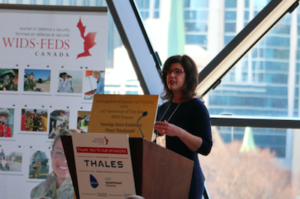 The breakfast event which was organised by WiDS was held on March 8th in Ottawa as part of their mandate to inspire women to pursue security and defence careers. Established over 10 years ago, the WiDS Scholarship fund has provided financial aid to women who are Canadian citizens to further their education in empowering them for careers in the defence and security community. Over the years the scholarship was awarded to female students ranging between $1,000 to $10,000.

“We are all working for the same cause to promote Canadian defence and security,” Kristine Osgoode, Executive Vice President, of WiDS said during her opening remarks. It is all about “recognising the excellence that women bring to this field,” she added.

The 2017 Memorial Scholarship was awarded to Sarah Dobson, a fourth-year honours student in Political Science at Dalhousie University specialising in International Relations. Dobson who is from Halifax, Nova Scotia has a love for international relations and a particular interest in NATO, whom she would one day like to work for. 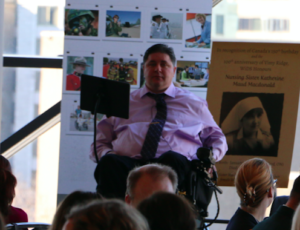 “At times like these, it is important to remember the courage and service of women,” The Honourable Kent Hehr, Minister of Veterans’ Affairs and Associate Minister of National Defence said during his keynote address. “Canada needed and will always need Canadian women like Katherine and Sarah,” he stated further.

The Minister went on to add that the CAF is one of the first militaries in the world to open up all occupations to all women. “Women can and do succeed in our military,” he said. “The CAF needs women to be successful.” He reiterated that need for women in the military will make us better. “The more diverse we are the better we are in what we do,” he said.

Minister Hehr knows how important drive and ambition are in becoming successful. At the age of 21, he was hit by a drive-by shooter that left him paralysed. But that didn’t stop him, he went on to earn his Bachelor of Canadian Studies and later his Bachelor of Law while still re-learning to use his fingers. He then went on to practice law and became an active community leader and eventually holding public office. 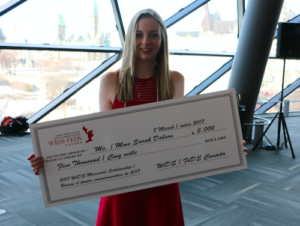 “With all the organisations out there supporting women, it is so great to see WiDS and the inspiration they bring to women,” Sarah Dobson in speaking with Vanguard after the presentation said. “It’s a great privilege to be in a room with all of these people and plus to be awarded a scholarship in the name of Nursing Sister Katherine Maud Macdonald is indeed a great honour,” she added.