Shipbuilding Event: Technologies that will drive shipbuilding in the Future

At the recently held Shipbuilding Technology Forum, about 150 personnel from the military, government, defence and marine sectors participated in an innovative and knowledge exchange program about technologies of the future.

The one-day event that was held on March 2, 2017, at the Fairmont Chateau Laurier in Ottawa was the third such annual event that was organised by Vanguard to highlight and showcase new technologies that could offer vital solutions to the shipbuilding industry in Canada.

Over the years, Vanguard has used this forum to help “promote the debate and discussion with leaders in government and industry about technological advancements and opportunities in Canada’s new classes of vessels,” Terri Pavelic, Editor-in-Chief of Vanguard said during the opening remarks in setting the stage for the conference. 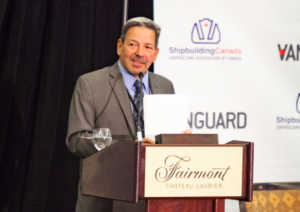 Francois Cordeau, Vice-President of Engineering at the National Research Council (NRC) during the opening keynote said that the NRC has been involved in Arctic technologies for over 60 years and that many projects that they have taken on have had a direct impact in the shipbuilding sector. He went on to describe how the NRC has been commissioned by Transport Canada to look for clean technologies like photovoltaic – since solar power is becoming the cheaper power to use for the first time – to generate clean energy in providing power for auxiliary uses such as lighting and communication.

The NRC is also actively engaged in Additive Manufacturing (AM) in metal power and wire applications areas and the use of laser technology to further this technique so as to lower the overall manufacturing and repair costs in shipbuilding.

This was an apt introduction to the panel on Additive Manufacturing in which Philippe Dupuis, President of Precision 3D talked about Cold Spray technology and how it can restore parts that were damaged during normal use or even during manufacturing. “It is more expensive to replace a part than in repairing it,” he said. With Cold Spray “you can restore and coat areas that were damaged at a far lower cost,” Dupuis added.

Another area of AM is 3D printing which is expected to double in the next three years. Garry Warren, Vice President of the Industrial Development Construction & Equipment Division of JD Irving Ltd. talked about the three pillars for the adoption of Additive Manufacturing: Research and Development, Workforce Development and Commercialization. He also pointed out that they are working on launching a Centre of Excellence to “ensure the future of manufacturing in Atlantic Canada through innovation and technology” along with the three pillars. This will help local manufacturers to have access to training and the facility to stay current with emerging technology, the region to be recognised as an expert in the use of 3D metal printing and to empower SMEs to produce the next generation of parts and materials.

Dr. Mohsen Mohammadi, Assistant Professor and Director of the Cognitive Performance Optimization Lab at the University of New Brunswick shared his latest research on the different types of 3D printing and demonstrated the use of laser and powder combination in 3D printing.

Liquefied natural gas (LNG) was another topic that was covered during the conference. Andrew Kendrick, Vice President of Operations at VARD Canada spoke about the challenges of LNG and how Canada can benefit from it. LNG provides a competitive advantage for Canadian ports while providing cost reductions for operators and end users. It also provides opportunities for shipyards and suppliers to grow their businesses and results in cleaner air for all.

Kendrick reminded the audience that the International Maritime Organization (IMO) Marine Environment Protection Committee has set a global sulphur cap that requires all ships to use fuels with a maximum 0.5 per cent sulphur content as of January 1, 2020. “As we draw closer to the 2020 sulphur limit that will take effect globally, ship owners have to make a decision really fast,” Kendrick said, to go with a cleaner fuel like LNG. “We are very close to having a take-off in LNG,” he added.

“Trust is the keyword in marine safety,” Jeffery Hutchinson, Deputy Commissioner for Strategy and Shipbuilding at the Canadian Coast Guard told the audience during the luncheon keynote. “We aim to have the safest system in the world, it is our heart and soul,” he added. To get to this point requires that the Coast Guards be involved in the innovative space. 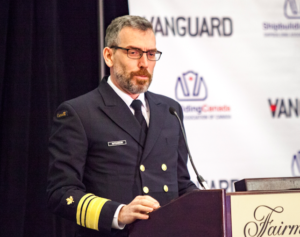 He went on to talk about how the Arctic is a geopolitical chessboard with traffic being a challenge but we should be focusing on new and emerging ways of thinking about this region. It is about changing the tone of conversation internally from one of a reactive stance and response to more of an intervention role. He then asked how does this connect to shipbuilding and the National Shipbuilding Strategy? He went on to say that it is about becoming “better ship buyers.”

Looking to the future he believes that we may come to a time when it will be possible to conduct search and rescue operations with drones. That is something that will provide great cost saving benefits. He also looks forward to seeing more women sign up to serve in the Canadian Coast Guard.

“It is all about building ships that we can be proud of for a long time but at the end of the day it comes down to trust,” Hutchinson said.

Andrew Korney, Director of Business Development at Terragon Environmental Technologies Inc. said during his presentation on Modern Waste Management at Sea that “zero waste discharge is the goal.” He went on to point out one way of doing this is to replace our wasteful “one pipe in-one pipe out” doctrine with the “water for purpose” approach like reusing the water used in showers for flushing toilets. This he said can significantly reduce our water consumption and eliminate dirty water discharge.

The last panel of the day was on Design Considerations for Arctic Operations. Derek Buston, Project Manager for the Polar icebreaker talked about Canada’s first polar icebreaker, CCGS John G. Diefenbaker and how it will provide the Canadian Coast Guard and the Government of Canada with enhanced capabilities in the North.

He went on to list the key features of the Polar icebreaker:

David Lloyd, Naval Business Manager at Lloyd’s Register Canada then gave a presentation on the IMO Polar Code. He went on to explain that the Polar Code is “a set of additions to SOLAS and MARPOL reflecting the hazards of operation and sensitivity of the environment.” He pointed out that even with all the requirements of the Code, assessment is required to evaluate a ship like the equipment and systems provision against the hazards of operating in Polar waters and this assessment is in addition to the prescriptive requirements of the Code.

Andrew Kendrick from VARD then concluded the event with a presentation on the design of icebreaking ships. He gave an overview of the Regulatory framework, Hull form, Structural Design, Propulsion Systems, Winterization and Environmental Issues and how it ties back to the Polar Code.

The next Shipbuilding Technology Forum is scheduled for March 1, 2018.