Canadian soldiers who are part of the CAF’s contingent to the NATO force in Central and Eastern Europe have a new commander.

Maj. Jesse van Eijk recently took command of Operation Reassurance Land Task Force (LTF) from Maj. Lonnie Campbell as part of the command’s transition from Rotation 6 to Rotation 7, according to the military.

As part of Canada’s contributions to NATO assurance and deterrence measures, the LTF demonstrates Canada’s commitment to security and stability in Central and Eastern Europe. LTF members participate in military exercises throughout the region to improve interoperability with Allies and demonstrate NATO’s resolve to protect alliance territories and partners.

During this operation, the CAF is conducting training, exercises, demonstrations, and assigned NATO tasks. 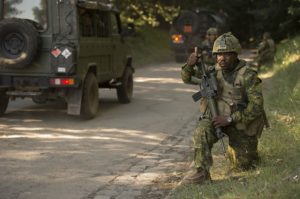 “Rotation 7 brings together highly trained and motivated soldiers from across the Canadian Armed Forces who are ready to face the challenges and opportunities of this mission,” said Eijk during the turnover ceremony at the Drawsko Pomorskie Training Area in Poland, which was presided over by Colonel Pascal Demers, Canadian Defence Attaché to Poland. “ We look forward to building on the achievements of previous rotations to both develop our own capabilities and to work with our Allies to enhance NATO readiness.”

“It has been a privilege to command this outstanding group of dedicated soldiers over the last six months. Their hard work has increased our interoperability with other NATO nations and enhanced the esprit de corps amongst the soldiers that make up this Alliance,” outgoing commander Campbell said. 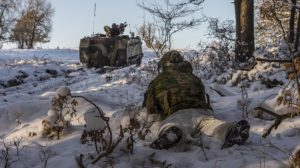 A Canadian Armed Forces member lies in the prone position while doing a sweep of the area during Exercise ALLIED SPIRIT IV at the Joint Multinational Readiness Center Training area in Hohenfels, Germany during Operation REASSURANCE. (Photo: Corporal Nathan Moulton)

There are about 200 Canadian Army soldiers deployed to Poland in support of Operation Reassurance. These soldiers are mostly from 3rd Battalion, Princess Patricia’s Canadian Light Infantry, based at Canadian Forces Base Edmonton, Alta. 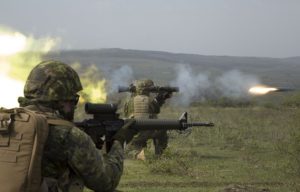 During their six-month tour, soldiers participated in major exercises in Poland, Germany, Romania, and Lithuania, as well as smaller-scale training activities in Poland.

More than 1070 Canadian soldiers have deployed as part of Operation Reassurance since the first rotation in May 2014.

LTF soldiers have participated in 32 military exercises in six different European countries since May 2014.