Systems interoperability, reach-back capability, and streamlining of the procurement process, these were the common themes that surfaced in several panel discussion among senior military officers and defence industry representatives in Vanguard’s C4ISR and Beyond 2017 conference in Ottawa yesterday.

Commanders and military personnel need access to up-to-date tools that will help them gather relevant and analyze information that soldiers in the battlefield can rely on conduct decisive actions, according to the officers from various services that attended the event.

“Every single service in the Canadian Armed Forces uses C4ISR and rely on C4ISR data,” said Brig. Gen. Frances Allen, director of general of cyberspace for the CAF. “C4ISR needs to be recognized as a joint enabling capability onto itself…a capability that must exist and championed.” 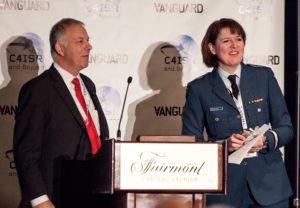 She also said that the military is working on its cyberspace roadmap.

Allen, who was the opening keynote speaker of the event, pointed out that with more IT systems relying on the Internet, cyberspace is evolving rapidly into a critical component of C4ISR.

The conference master of ceremonies was Col. (Ret’d) Andre Dupuis, president of Space Strategies Consulting Ltd. The conference was divided up into four panels.

Panel 1 dealt with what are the main c4ISR challenges of the military service. The panelists also discussed the C4ISR direction in the context of the ongoing Defence Policy Review. They also gave attendants some idea on what are the particular C4ISR needs of their respective service. 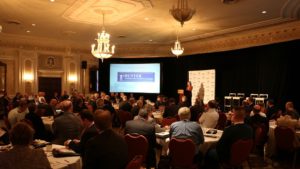 The military needs reliable and effective tools that provide commanders and troops situation awareness. These tools also need to enable soldiers to rapidly alert command on what they need to accomplish their mission. 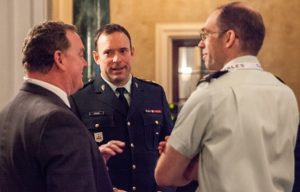 “We need systems that are able to work together,” said Pilo. “…we need interoperability and we need to shorten the link.”

Panel 2 was titled Space: The unseen enabler. This panel discussed force multiplier and the essentials of modern defence, cost effective services for communication and weather surveillance, and how to capitalize on the growth of satellite bandwidth.

Hunter talked about recent technological developments in the industry which continues to bring down the cost of satellite communications. 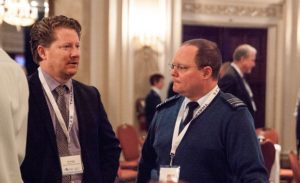 Dooling raised the need for further military and commercial industry partnership so that the CAF can have more access to satellite use.

Perhaps one of the most interesting moments of the conference was Wheelers presentation on the challenges presented by the increasing use of terrorists and some state-backed actors of the social media.

We can’t wait for 7 years before we get a solution. We all need to work together. Sophie Martel, Senior Director, DIMEI #C4ISRBEYOND pic.twitter.com/ltmi60vUZH

Wheeler said that traditionally the military’s targeting capabilities were focused on hard targets such as enemy formations, infrastructure, installations, vehicles or machinery.

“But now we are working in an entirely new and complex environment where our enemy uses terrorism, social media and cybercrime,” he said.

Wheeler showed on the screen what appeared to be a music video featuring a mashup of Western and Russian military images and scenes of poverty and war.

“It doesn’t say anything but it is trying to influence a large population with the view that benefits Russia to the detriment of democracy,” Wheeler said. “We don’t know exactly where it came from, but it has had millions of views on the Internet…this is part of what we are up against.”

Panel 3 took on the topics of science and technology and adaptive dispersed operations. This panel, moderated by Brig. Gen. (Ret’d) James Simms, strategic advisor to Thales Canada Defence and Security, provided a joint commander’s point of view of C4ISR.

Lavoie made a case for upgrading C4ISR systems so that elements in the field have adequate capacity to reach back to the command centre for pertinent data when the need arises. Forward units do not have the capacity to carry heavy computing equipment to their operations. They need a reliable link to command in order to receive accurate and timely information, he said.

The panel was moderated by Jamie O’Hare, cirector of channel and client relations for security firm Cytelligence. The panelists were Sophie Martel, senior director of the DND’s Directorate Information Management Engineering and Integration; John Proctor, vice-president or technology consulting firm CGI; and Nicholas Scheurkogel, director of cyber intelligence for Cytelligence.

The importance of keeping ahead of cyber threats was discussed during this panel.

“We can’t just think about serving the current need and addressing today’s threats. We also need to think about countering future threats,” said Martel. “We need to avoid a capability gap.”

The group agreed that this can be accomplished by revamping traditional procurement practices.

For instance, focusing on desired outcome rather dogged adherence of established processes can help in ensuring that C4ISR programs are targeting towards the actual needs of the military. Calibrating timetables towards shorter development cycles and delivery times will also ensure that C4ISR systems constantly upgraded and refreshed when needed and don not become obsolete.