Lieutenant-Commander Donald Allan lives two lives, one of which is pure fantasy.

An information warfare specialist in the Royal Canadian Navy by day and an award-winning self-published fantasy novelist by night, LCdr. Allan is a self-affirmed “large geek and sometime nerd.”

“I was nominated and then unexpectedly I won Gold in my category,” he says. “I am my own worst critic. People tell me ‘I love your novels’ and internally I am wincing, thinking ‘how did they miss this or that?’ It’s still sinking in. I’m not used to bragging, but I’m starting a little! So it felt good. It affirmed that I am indeed an author; an honest to goodness real author.”

In fact, Allan is currently writing the third book in what he calls the “New Druids” series and already has plans for a fourth. All the books have Celtic titles (along with Duilleog there is Craobh [branch], Stoc [stalk] and Freamhaigh [root]), which is a natural fit for him since he grew up in a Scottish household. 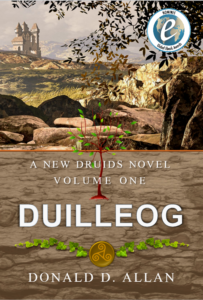 “My mom and dad and my brother immigrated from Port Glasgow, Scotland in 1962. I was born in Ottawa but have been surrounded by all things Scottish my entire life, so I naturally lean towards Celtic things. Except Scotch pies – I hate those things,” Allan laughs.

He has been writing his whole life, but mostly for enjoyment, he says. A teacher at the Glebe Collegiate Institute in Ottawa where he went to high school, Brian Doyle, also an established author, wanted Allan to become a writer and publish his stories. “I should have listened to him,” says Allan, “but for me the navy always came first.”

He worked as a naval reservist for nine years before joining the Regular Force as a maritime surface and sub-surface officer. However, he harboured a long-time dream of seeing his name on the cover of a novel, and while posted to Washington, D.C. where he worked with the U.S. Navy in the Pentagon, the concept for a fantasy series was born. Suddenly the idea consumed him and he wrote his first full-length novel. It was published in June 2015.

As a child, he was introduced to the fantasy genre by a teacher he had a crush on in the fifth grade, Mrs. Robinson. “The humour is not lost on me,” he says.

He particularly liked the escapism that stories by J.R.R. Tolkien, C.S. Lewis, Stephen R. Donaldson, Elizabeth Moon, Robin Hobb and Ursula Le Guin offered. “Fantasy has always attracted me for its ability to make you dream of fascinating worlds and alternate realities. Look at the global admiration for Game of Thrones, and even Harry Potter – everyone loves fantasy! So, writing in fantasy comes naturally to me. When you have immersed yourself in mythology and fantasy your entire life it’s natural to stick to it.”

Allan admits that the novels of Elizabeth Moon are his favourites, brilliant in their simplicity and attention to the little things that mimic real life. “Few books make you swallow in sorrow or cheer in delight. To make the real world fade a little for the reader and get them to understand that change can be awe-inspiring and frightening too. Wrap it with wonder and magic and there you have it: a perfect escape.”

Like most people, Allan has to balance his work and family life. While he used to be an avid computer gamer, now he writes on a laptop in the family room while watching TV with his wife and two children. “It’s relaxing and I am now more a part of my family than ever before. Family is everything. My writing is never going to shadow family priorities. I think perhaps the navy taught me how to balance work, family, and my writing. It’s one of the strengths of the navy – our people and their ability to juggle countless items of work, family, and life – and come out shining.”

Allan admits he often gets a strange response from people who discover he is a naval officer who writes fantasy novels. “They see a naval officer and assume I have read the Master and the Commander series or The Battle of Midway. Truth is, I hate nautical stories and non-fiction bores me to tears.”

The third book in the New Druids series will be published in June 2017, and the fourth, which he has outlined, will follow a year later if not sooner. He is currently writing his first science fiction novel, set in Algonquin Park and Ottawa, also set to be published next year.

“I’m always thinking of some new story, whether on the bus to work or lying in bed staring at the ceiling,” Allan says. “Interestingly enough, I’ve raised my children to love reading and I read to them almost every night when I was home from sea. Their favourites were the stories I made up. You take a simple idea and then run with it – anywhere you like, really. Add a little twist, throw in their names for giggles, and the next thing you know you’ve made a little world with a little story in it, and the kids are happy and ready to sleep. The story is just there for the grabbing, like low-hanging apples on a tree. Some you grab are rotten and you throw those ones aside; some though are sweet and tart and bursting. Those are the ones you write about.”