Crew members of Her Majesty’s Canadian Ship (HMCS) Edmonton teamed up with the U.S. Coast Guard (USCG) in the seizure of an estimated 2,120 kg of cocaine in the waters off the Pacific Coast of Central America.Seven suspected smugglers were arrested, a total, 32 bales of cocaine were recovered during three disruptions, weighing an estimated 1,510 kg, while an estimated 610 kg of cocaine were lost to sea despite an extensive search during the joint operations which took place from November 15th to the 18th, according to reports released over the weekend. The Canadian Armed Forces involvement in anti-drug trafficking activities in the Carribean Sea and Easterns Pacific Ocean falls under the military’s Operation Caribbe.

As part of Operation Caribbe, Canada is contributing Canadian Armed Forces ships and aircraft to Operation Martillo – a joint, combined and interagency effort by Canada, the United States, France, the Netherlands, Spain and the United Kingdom to prevent illicit trafficking in the Caribbean sea, the eastern Pacific Ocean, and the coastal waters of Central America. 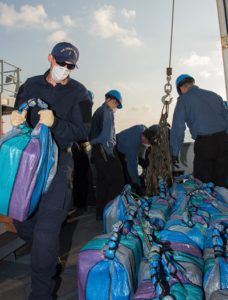 The collaborative efforts of the Royal Canadian Navy, USCG Law Enforcement Detachments (LEDET), USCG cutters, and USCG aircraft led to the disruption of drug smuggling operations in the area. USCG aircraft provided observation and vectoring information to teams deployed in rigid-hulled inflatable boats, and USCG cutters served to house and transport the suspected smugglers who were apprehended.

“Edmonton’s interceptions this week are the result of the crew’s focused training in advance of deployment and tireless effort while deployed,” said Lieutenant-Commander Lucas Kenward, Commanding Officer HMCS Edmonton.” I am incredibly proud of their efforts to date. Edmonton has demonstrated the Canadian Armed Forces’ ability to communicate, share information, and seamlessly integrate with the maritime patrol aircraft and surface units of our USCG and USN allies to combat narcotics trafficking in the Eastern Pacific.”

In the November 15 incident, a total of one bale of cocaine weighing an estimated 40 kg was recovered from the ocean, with an estimated 610 kg lost to the sea, despite a 10-hour search by HMCS Edmonton. A panga-style fishing vessel was boarded by a USCG LEDET team and four suspected smugglers were apprehended. They were eventually transferred to a USCG cutter.

In the November 17 incident, a total of 16 bales of cocaine weighing an estimated 760 kg were recovered from the ocean. A panga-style fishing vessel was boarded by a USCG LEDET team and three suspected smugglers were apprehended and subsequently transferred to a USCG cutter.

In the November 18 incident, a total of 15 bales of cocaine weighing an estimated 710 kg were recovered from the ocean. A panga-style fishing vessel evaded capture after jettisoning its cargo.

In 2016, the Canadian Armed Forces (CAF) has assisted in the seizure or disruption of approximately 5,750 kg of cocaine and 1,520 kg of marijuana.

The CAF has conducted Operation Caribbe since November 2006. Operation Caribbe is Canada’s participation in the multinational campaign against illicit trafficking by transnational organized crime in the Caribbean Sea and the eastern Pacific Ocean.

In October 2010, it was expanded with the signing of a Memorandum of Understanding between the Commander of Canada Command, acting for the Department of National Defence and the Canadian Armed Forces, and the Deputy Commandant for Operations of the U.S. Coast Guard, acting for the U.S. Department of Homeland Security. This Memorandum of Understanding allows LEDETs to operate from Canadian warships deployed on Operation Caribbe.

Election 2015: The RCN needs attention
Shipbuilding in Canada will fail if Industry does not take the lead
Navy honours six of its best
Reclaiming Canada’s reputation in anti-submarine warfare
What is best value for the Canadian Surface Combatant?
0
SHARES
ShareTweetSubscribe