The Liberals moved to address the Canadian Armed Forces’ fighter jet “capability gap” by announcing today that it will buy 18 F/A18 Super Hornet jets from aerospace company Boeing. It is an “interim purchase and a full-on replacement of the Royal Canadian Air Forces aging fleet of CF-18 fighter jets will still be launched sometime before the end of Prime Minister Justin Trudeau’s term.

“As we promised, our Government will be conducting an open and transparent competition to replace the long-serving CF-18 jets,” said Public Services and Procurement Minister Judy Foote. “We will also begin discussions with Boeing for the purchase of an interim fleet to deal with the capability gap.”

“The competition for a permanent fleet will be informed by the outcomes of the defence policy review next year,” he said.

Since this summer, Sajjan had been very vocal in seeking a replacement for the CF-18s which were purchased back in the 1980s.

Find out what former CRAF pilots have to say about the Super Hornet and the F-35, click on the image below 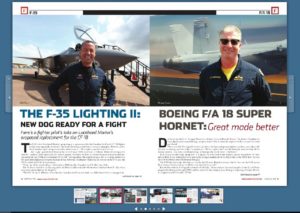 There are two aircraft companies that are considered close rivals for the CF-18 replacement contract. Boeing is proposing its Super Hornet fighter jet while Lockheed Martin is positioning its stealth-capable F-35 Lighting II fighter.

When he was still campaigning for his position, Trudeau has promised that the Liberals would not purchase the F-35. But once in office, the Liberals has back-tracked for its initial stance and announced that Lockheed Martin was not being locked out from the competition.

Today’s announcement is seen as big boost for Boeing.

“Boeing is honored to provide the Royal Canadian Air Force with the only multi-role fighter aircraft that can fulfill its immediate needs for sovereign and North American defense,” an emailed statement from the company said. “The Super Hornet’s advanced operational capabilities, low acquisition and sustainment costs, and Boeing’s continued investment in the Canadian aerospace industry — US$6 billion over the past five years alone – make the Super Hornet the perfect complement to Canada’s current and future fighter fleet.”

Asked if the purchase announcement was could be seen as a vote of confidence for Boeing, D. Scott Day, of Boeing’s International Communication, replied “obviously.”

Episode 24: Interview with Billie Flynn on the F-35

But as to the full replacement of the CF-18s, he said: “the government will have to decide, we’ll have to wait for the government’s announcement on that.”

The latest development was a “disappointment” for Boeing’s main competitor.

Lockheed Martin said it recognizes that the Liberal’s decision was an interim one.

“Although disappointed with this decision, we remain confident the F-35 is the best solution to meet Canada’s operational requirements at the most affordable price, and the F-35 has proven in all competitions to be lower in cost than 4th generation competitors,” a statement from Lockheed Martin said. “The F-35 is combat-ready and available today to meet Canada’s needs for the next 40 years.”

The company also said that it will remain in the competition for the contract to replace the CF-18 fleet.

“Canada remains a valued partner in the F-35 development program,” Lockheed Martin said.  “As the Canadian Ministry of Defense has said, Canada will continue to participate in the F-35 program.”

The F-35 Joint Program Office will continue to provide information and answer questions to ensure officials have the facts as the Canadian government considers its options, the company said.

Air mobility: The revival of a key capability
Lockheed Martin completes IRB commitments for CC-130J
F-35: Designed to handle all roles
Next gen pilot: From technician to tactician
The Replacements Part 4: Gripen about the Next Fighter
2
SHARES
ShareTweetSubscribe