Gatineau, Quebec  — The Canadian Army (CA), like many of its international partners, makes good use of simulators as safe, inexpensive alternatives to training with real equipment;  however, a CA-led project is also leveraging the value of simulators in new ways.

Whenever a procurement project gets underway, their directors must  consider if there is any relevant simulation equipment that might be obtained as part of that project. The staff at the lab can demystify technology for project managers, test software, and if requested, offer advice on what to purchase.

“We have project guys come in here with virtually no sim experience whatsoever,” explained Master Warrant Officer Lanny Hill, Manager of the simulation lab, which is located in Gatineau, Quebec. “Our support can be as simple as sitting down and having a conversation or they give us a piece of software and we evaluate it for them.” 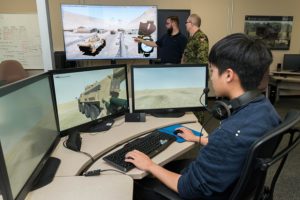 “The goal of the lab is to give project staff the ability to be informed consumers so they are able to keep up with the lingo, for example, and not just have to take industry’s word for it,” he added. “You don’t necessarily need the $5,000 4K screen, maybe you just need the $300 high definition screen – those sorts of things.”

This is not to suggest the military’s relationship with industry is oppositional, MWO Hill said. In fact, the lab is of mutual benefit: a simulator for training vehicle gunners built by defence contractor Rheinmetall is on indefinite loan and the company will receive useful data from its use once the facility is fully up and running.

In addition, Bohemia Interactive Simulations, the Australian company behind Virtual Battlespace, a widely-used simulation program, has a similar agreement in place and will also receive data once a still-in-development software evaluation plan is in place.

The lab is also a place for collaboration among all three branches of the Canadian Armed Forces. MWO Hill and his team recently assisted Navy personnel in the development of a simulator that can turn a tablet into a virtual ship’s bridge. 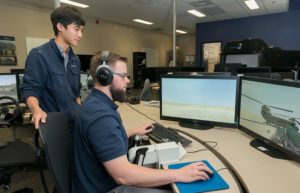 “So the sailor can sit in the barracks at night and practice being an officer of the watch,” he explained. “It’s actually quite exciting.”

The possibilities of 3-D printing are also on the longer-term agenda, though the lab has not yet been equipped with a printer. The technology could be used, for example, to create materials for CA’s Urban Operations Training System (UOTS). The UOTS is a series of simulated villages with built-in special effects in which soldiers train for close-quarters fighting in urban environments. There is potential, MWO Hill said, to create buildings and urban layouts that are more easily reconfigured.

Accessories for vehicle interiors could also be created via 3-D printing, offering the opportunity to ensure they are a good fit before adopting them for wider use.

While a great deal of work has already been done, the lab is not yet working at full capacity. For now, there is just MWO Hill, one part-timer, and two co-op students. With funding in place for at least the next five years, MWO Hill said he hopes to eventually bring three full-time staff on board.

MWO Hill himself started his career with Lord Strathcona’s Horse (Royal Canadians), an Edmonton-based armoured unit. Though he does not have the formal education of an Army Simulation Officer, the self-described “nerd” and gamer was asked to help set up a simulation lab at the CA Armour School in Gagetown, New Brunswick. He also served several years as a Weapons Effect Simulator (WES) specialist at 3rd Canadian Division Training Centre in Wainwright, Alberta, where soldiers train with laser-based weapons.

He credits Major Greg Nette, the lab’s founding director, and Ian Mack, the original project manager, with thinking beyond the lab’s original mandate to support the Land Vehicle Crew Training System project. Still, only in its earliest stages, the project seeks to create a number of virtual training centres in Canada.

“Major Nette was definitely of a mind that we need not just settle for what we already have. He said, ‘I want to make sure we get it right. Because it takes us five, six, 10 years to buy something, I want to buy what’s current by the time we get there. I don’t want to start now buying this and then 10 years from now, it’s obsolete.’”

“It is invaluable to have not only the hardware and software available to use, but even more so to have experts at hand with whom I can consult,” said Captain Thomas Booth, a project director with the CA’s Directorate of Land Requirements who has visited the lab. “MWO Hill’s grasp of the marketplace and emerging trends will undoubtedly pay a rich return as procurement projects are better informed as to the possibilities.”