The Department of National Defence, through Defence Construction Canada, has issued a tender for the replacement of two main berthing facilities for Royal Canadian Navy vessels at Canadian Forces Base Esquimalt in British Columbia.

The current tender is estimated at $72 million and will involve demolition of the existing B Jetty at Her Majesty’s Canadian (HMC) Dockyard Esquimalt. There is also a future project which involves rebuilding B Jetty and them demolishing and rebuilding A Jetty.

The DND has budgeted $781 million for the A/B Jetty Recapitalization Project. It is also expected that the project will create 1,400 jobs throughout its duration. 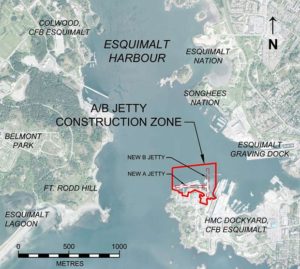 “The Navy’s existing ‘A’ and ‘B’ Jetties were constructed during the Second World War and have served the Royal Canadian Navy well,” according to Capt. Steve Waddell, base commander of CFB Esquimalt. “Nonetheless, they are at the end of their service life.”

He said the recapitalization project will “allow us to better support the operational needs of Canada’s Pacific Fleet with an integrated jetty facility, designed to withstand the effects of earthquake and tsunami.”

The longer and more versatile A/B jetty facilities, equipped with new cranes for loading and unloading warships, will accommodate the modern ships to be delivered by Canada’s National Shipbuilding Strategy to the Royal Canadian Navy.

Esquimalt Harbour, located to the west of downtown Victoria, BC, is the home port of Canada’s west coast navy. The navy presence began in the late 1840s with the establishment of the British Royal Navy dockyard in the Constance Cove area of the harbor.

In addition to the long-time naval presence over the past 170 years, many types of industries have operated in the harbour, including civilian and military shipbuilding and repair, commercial and military ship operations, and sawmilling.

Today, the harbor  is important to the Canadian Armed Forces and the DND not only as home port for the Royal Canadian Navy’s Pacific Fleet but also as the home of the residents of the surrounding municipalities and the Songhees and Esquimalt First Nations.

The A/B Jetty Recapitalization Project is divided into three phases

This approach is meant to ensure that critical site preparation work is done first and that one of the two jetties will be operational over the duration of the project, according to DND.

Phase 1, completed in 2014, involved a construction contract with Scansa Construction Ltd., of Victoria, BC, as the general contractor. A nearly one-kilometer long utility corridor or service tunnel was built, to bring utility services through the dockyard and down to the head of the existing “B” Jetty. Pipes along one side carry the sanitary sewer, steam, and potable water mains, while communications and electrical services run along the other side of the tunnel. 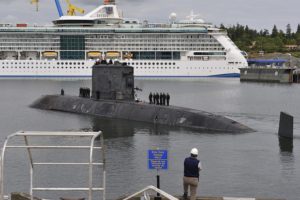 Phase 2, to replace the existing “B” Jetty, will be done in two stages. Phase 2A, for which a contract has just been tendered by Defence Construction Canada, involves the demolition of the existing “B” Jetty, dredging work and significant site preparation work within the terrestrial and foreshore areas of this part of the Dockyard. Phase 2B will follow along about 24 to 30 months later, with the construction of the new “B” Jetty itself.
Phase 3 will demolish and ultimately replace the existing “A” Jetty. This final phase represents a similar work plan that is expected to unfold through the early 2020s.

The procurement and installation of a new rail crane for each of the two new jetties, used for the loading and unloading of warships, will be synchronized with the jetty construction work as it unfolds.

The new A/B jetties will be constructed on pipe piles that will be anchored into the bedrock. A robust structural system will tie the piles together using heavy-duty reinforced concrete beams and decking.

New and upgraded shore facilities, equipment, and ancillary structures along with the rail cranes, will complete the new jetty facilities. The utility service tunnel and the associated utility service mains that were built during Phase 1 of the project will be extended underneath each of the new jetties.