Canadian WWII soldier finally laid to rest by his unit

On September 13th, 1944, members of the Algonquin Regiment prepared to establish a bridgehead crossing of the Dérivation de la Lys (canal) and the Leopold Canal, at the hamlet of Molentje, now in the municipality of Damme, Belgium.

The operation was part of the preliminary battles leading up to the Battle of the Scheldt — a series of military operations by the Canadian First Army – consisting of Canadian, British and Polish formations – to open up the port of Antwerp so that it could be used to supply the Allies in north-west Europe. 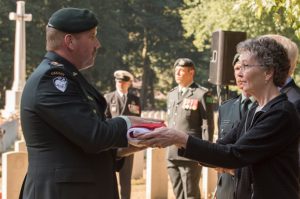 A series of circumstance, from the failure of a diversion to draw German forces away, to late boat launches, ill-time artillery support, as well a malfunctioning radio, doomed the assault. The failed attack forces the Algonquin Regiment to withdraw, leaving many of its members dead and wounded behind. Eight soldiers were later reported as missing. 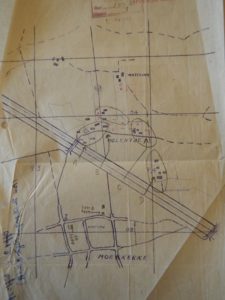 A sketch of the plan of attack for The Algonquin
Regiment near Molentje, Belgium found in
The Algonquin Regiment’s War Diary, September 1944.
LAC File: RG2400 Volume 15000

Now, 72 years later, one of those fallen and missing soldiers, Private Kenneth Donald Duncanson, was finally laid to rest by his unit, in Adegem Canadian War Cemetery outside Bruges, Belgium.

Duncanson, who was from Dutton, Ontario, was 29 at the time of his death. His body had lain undiscovered in a farmers field in Molentje, for several decades until a metal detector hobbyist found his remains along with some artifacts, in November 11, 2014.

Duncanson’s remains however, were not recovered by Belgian authorities in April this year. His remains were fully recovered by the Raakvlak Intercommunal Archaeological Service of Bruges, with assistance from DND’s Casualty Identification Program, and with the support of the Commonwealth War Graves Commission, the Embassy of Canada to Belgium, and the Canadian Defence Attaché. 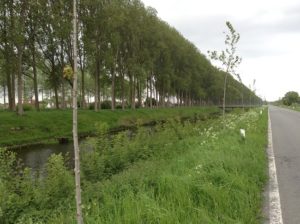 Duncanson’s identification was confirmed through a combination of historical context (the Algonquin Regiment was the only Canadian unit to have led an attack in the area), anthropological analysis, artefact evidence, and dental records.

Duncanson joined 67 of comrades from the regiment who also died during that fateful operation. Most of the 848 Canadians buried at this cemetery died in the fall of 1944 during the Liberation of Belgium and the Battle of the Scheldt.