Aerospace company Boeing said it is poised to legally challenge the decision by Denmark’s Ministry of Defence to buy Lockheed Martin’s F-35A Lighting II instead of the F/A-18E/F Super Hornet.

Just like the Canada, Denmark wants to replace its fleet of aging jet fighters. And like the situation here, the top contenders for the contract are the F-35 (also known as the Joint Strike Fighter) and the F/A-18. The Eurofighter Typhoon, manufactured by a consortium of Alenia Aermacchi, Airbus Group and BAE Systems, is also competing for the Danish contract.

The Danish government, however, concluded in June that replacing its F-16s with 27 Lighting II planes would be cheaper and would meet its needs better than purchasing 38 Super Hornets.

Boeing said it believes the procurement decision is based on faulty cost estimates and said it has “taken the first step toward bringing a formal legal challenge” of the Danish Ministry of Defence’s evaluation.

During last year’s election campaign, the Liberals promised they would not purchase the F-35. However, since coming to power, the Liberals had shifted their position. In December, Defence Chief Harjit Sajjan said the F-35 will not be cut off from any upcoming competition for replacements for Canada’s aging CF-18 jets.

Could a similar legal action be taken against the Canadian government should it decide to with the F-35?

“As we said when the decision was announced, we believe the Ministry’s evaluation of the competitors was fundamentally flawed and inaccurately assessed the cost and capability of the F/A-18 Super Hornet,” said Debbie Rub, vice president and general manager, Boeing Global Strike. “We’re taking this step because there’s too much at stake for Denmark and, potentially, other countries considering the Super Hornet.”

Denmark would require 38 Super Hornets to fulfill its needs, compared to 27 F-35s, based on the defence ministry’s estimate of the service life of a Super Hornet. 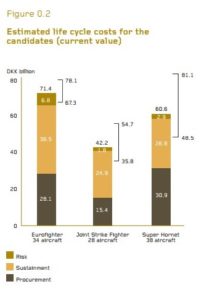 (Click on the image to find executive summary of evaluation)

“The calculations in the economic model have identified a need for 28 Joint Strike Fighter airframes, 34 Eurofighter airframes and 38 Super Hornet airframes, respectively, in order to perform the same portfolio of tasks,” according to the executive summary of the Danish evaluation of the F-35, Super Hornet and Eurofighter. “Another reason is that the Super Hornet is a two-seat aircraft, which implies a greater need for flight instruction hours and training of crews than the Eurofighter and the Joint Strike Fighter.”

The expert panel conducting the review found that the Eurofighter has a higher maintenance costs per flight hour than the F-35 and the Super Hornet and that the procurement price per aircraft is the highest for the Eurofighter.

The F-35 also beat out its competitors in the areas of survivability, mission effectiveness, and future development. But risks associated with the Super Hornet was the lowest among the three aircraft.

The panel also ranked F-35 is ranked number one with regard to industrial aspects because it assessed that “the industrial cooperation initiatives proposed by Lockheed Martin (Joint Strike Fighter) support the safeguarding of essential Danish security interests to a greater extent than the initiatives of the other two candidates.”

Boeing said it presented its concerns with the evaluation process to the Danish Parliament Defence Committee prior to the award decision earlier this year. The aerospace company is particularly taking issue with the Ministry’s estimate that the Super Hornet would cost up to twice as much as detailed in U.S. Department of Defense budget documents.

“Denmark deserves to know beyond a shadow of doubt that a fair and transparent process was used to select the country’s future fighter fleet,” Rub said. “Our action today underscores our belief that the Ministry’s evaluation of each of the four selection criteria fell short of these objectives and must be reviewed to the fullest extent allowed under Danish law.”