Eight young people are heading to their respective colleges and university today, thanks in part to the help of one of Canada’s leading organizations that support and honour ill and injured members of the Canadian armed forces, veterans, first responders and their families.

Through the generous support of the founding sponsors at The Bay Street Children’s Foundation, CIBC Capital Markets, RBC, and ITG, these eight students are headed to their respective college or universities “having received this important hand up,” according to WWC. 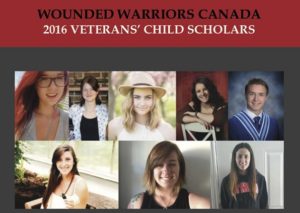 “Each of the applications we received was deserving of this fund,” said Phil Ralph, national program director of Wounded Warriors Canada, said in a statement. “Their heart-wrenching stories of what life can be like growing up in a home with a parent, or parents, who suffer from an Operational Stress Injury was a reminder to us all about the need to ensure the entire military family is supported when program options are considered. We look forward to watching the students grow and prosper in this next chapter of their lives.”